Ilhan Omar in Minneapolis: 'It sure feels good to be home'

Rep. Ilhan Omar may be embattled in Washington, but she was welcomed to Minneapolis by a cheering crowd on Thursday. 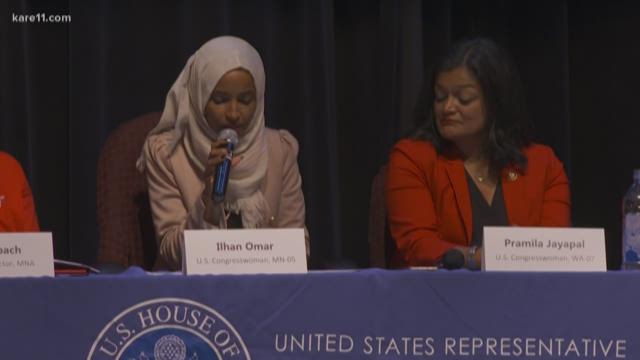 MINNEAPOLIS — "They said 'Send her back,' they didn't know I was already going back," Rep. Ilhan Omar said to the cheering supporters welcoming her to the Minneapolis-St. Paul International Airport on Thursday. 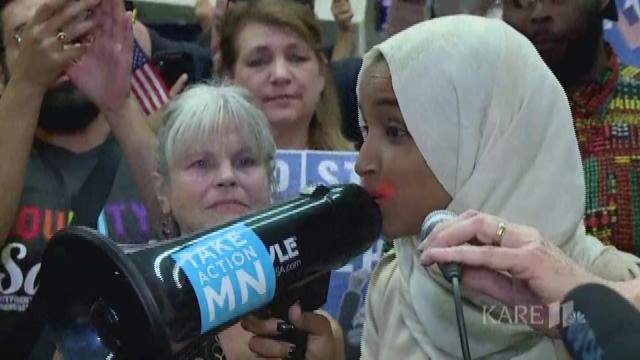 Omar's remarks were directed at crowds who chanted "send her back" during a North Carolina Trump rally Wednesday.

While she's been doing plenty of policy work, Omar has also been making national headlines lately in her back-and-forth battle with President Donald Trump.

RELATED: Trump digs in against Dem congresswomen; they're firing back

It started when Trump tweeted Sunday that Omar and three other congresswomen of color should go back to the "broken and crime infested" countries they came from. Omar is the only one of the four not born in the U.S. 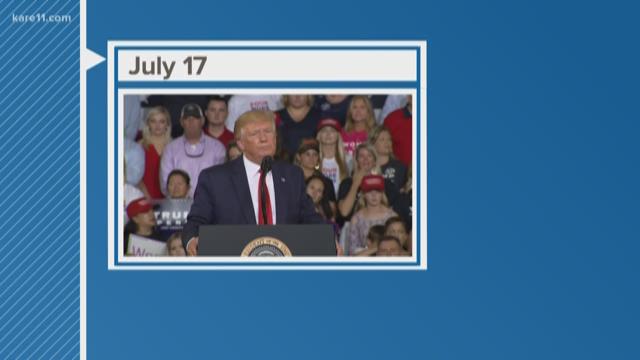 The congresswomen fired back on Monday, condemning what they called "xenophobic bigoted remarks."

Omar and fellow Rep. Pramila Jayapal are hosting a town hall on Medicare For All in south Minneapolis Thursday night. They'll be discussing universal health care, inequality, and a single-payer Medicare For All system.

When Omar arrived at the airport, she spoke to a group of supporters, criticizing Trump's immigration policies and saying that the country is "on the track of implementing fascist laws."

The crowd erupted in cheers at this. She continued, "And when I said I was the president's nightmare, well, you're watching it now."

Omar responded to the "send her back" chant on Twitter with words from legendary poet Maya Angelou:

Supporters of Omar are taking to Twitter with the hashtag #IStandWithIlhan, which is trending #1 in Minneapolis on Thursday.

After leaving the airport Omar cohosted a town hall meeting on Medicare for All, at the Sabathani Community Center in South Minneapolis. Rep. Pramila Jayapal of Washington State joined Omar for a forum with medical policy leaders, state lawmakers, doctors and nurses.

Medicare for All is one of the universal health care proposals being debated in Congress, but hasn’t been embraced by all Democrats, including Sen. Amy Klobuchar. The biggest advocate for the single-payer plan is Sen. Bernie Sanders, a leading presidential candidate.