"I wish the removal had been different, but I am not sad that it’s gone," said Lt. Gov. Peggy Flanagan, the highest-ranking Native American woman in elected office. 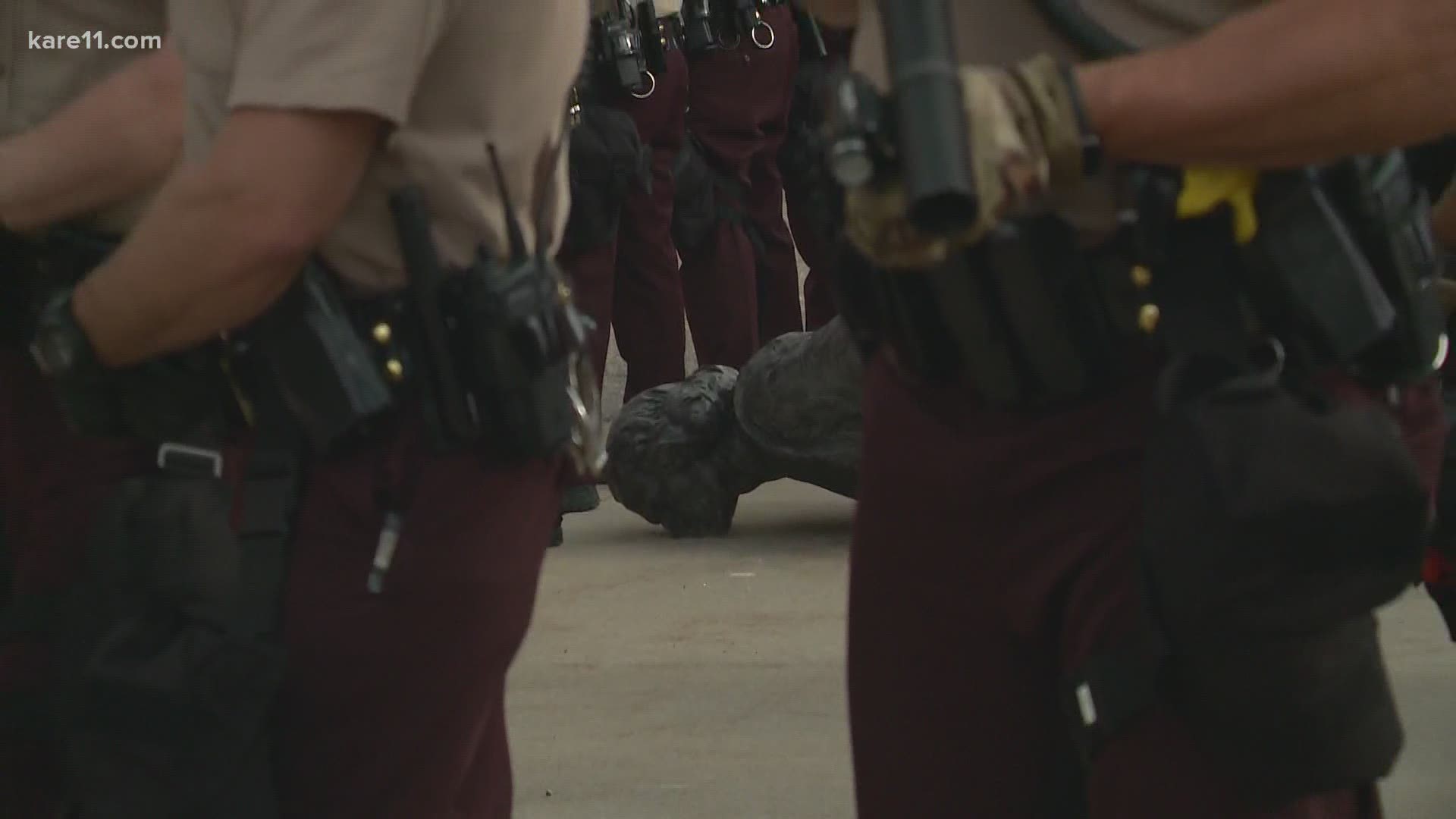 ST PAUL, Minn. — A group of protesters toppled the Christopher Columbus statue outside the Minnesota State Capitol on Wednesday evening.

A few hours earlier, Minnesota Department of Public Safety Commissioner John Harrington had been asked if he was aware of threats that the group had been making about taking down the statue. Harrington said that authorities would be present and would talk to the group about what the process would be to have the statue removed.

Despite this, the group toppled the statue later in the evening.

Mike Forcia of the American Indian Movement Twin Cities said that he bought a rope and allowed others to do the heavy lifting to bring the statue down to the ground. He said their actions came after repeated efforts to petition for removal through official avenues.

“I spoke with one of my elders this morning, and he said, can’t do it that way. Can’t be passive anymore. You have to go down there and you have to take it down," Forcia said. "After we were done, I was told that, yes I will be arrested. I will be charged with criminal damage to property, but that’s part of what happens… and I’m willing to take that.” 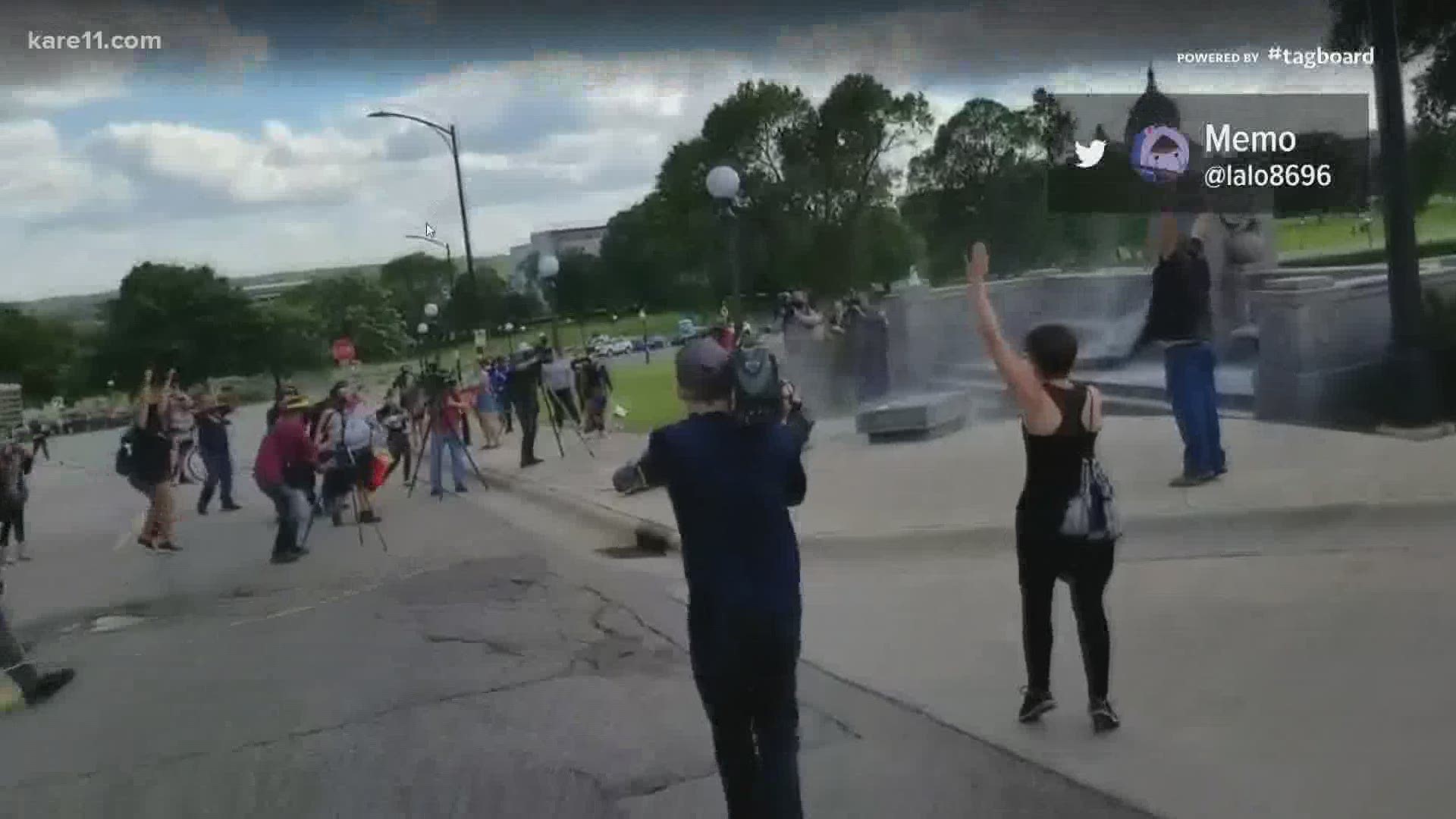 State Troopers then surrounded the toppled statue while protesters remained on the scene. A spokesperson for Minnesota State Patrol said that "no one was arrested at the event; however, the State Patrol identified the instigator who will face charges related to destruction of public property. Once the State Patrol’s investigation is complete, it will be turned over to the Ramsey County Attorney." 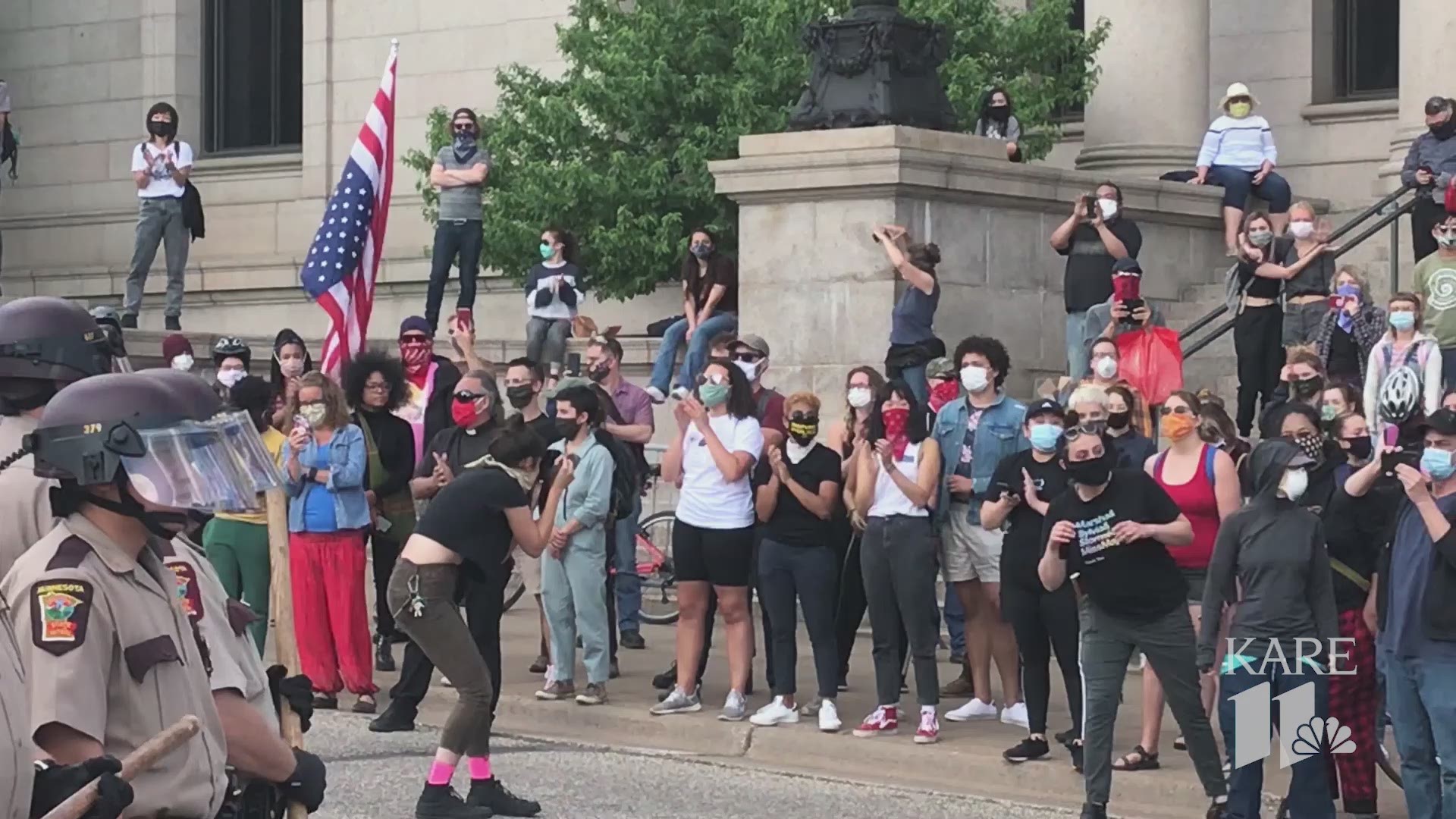 Harrington addressed the incident again on Thursday, saying that the State Patrol captain who was in charge of security that day went out and talked with the protest leader, and as that conversation was happening, a group threw a rope around the statue and pulled it down.

Gov. Tim Walz also commented Thursday, calling the incident "an act of civil disobedience." He said there will be consequences, which the people who did it "clearly understood and were prepared to take."

"Don’t confuse the random burning of a liquor store with an act of civil disobedience," Walz said Thursday. "And it doesn’t mean that we’re condoning the behavior, but I think (we) understand the motivating factors there."

Lt. Gov. Peggy Flanagan, the highest-ranking Native American woman elected executive in the country, said "the current process is not well-defined" for changing what is displayed at the Minnesota State Capitol. As the chair of the Capitol Area Architectural and Planning Board (CAAPB), she pointed out that even people familiar with government don't even know about the board.

"I wish the removal had been different, but I am not sad that it’s gone," she said. "Columbus’ legacy was setting in motion generations of violence, rape and genocide against indigenous people who were already here when he arrived."

Flanagan said that placing a statue at the capitol confers an honor to their legacy.

"There is no honor in the legacy of Christopher Columbus," she said. "To remove a statue or choose not to place one there in the first place is not an erasure of history but a reckoning with it."

Flanagan said Minnesota needs a process that is "accessible, proactive, community driven and transparent" to decide what will be displayed at the capitol. She pointed out that two paintings that were removed from former Gov. Mark Dayton's office because of their content were moved to the third floor, which is a less busy area.

"In some ways that has been the most 'Minnesota nice' response to how we deal with racism," she said. "We’re gonna take it out of this room and we’re gonna hide it away and we’re not gonna talk about it. So we’re done with these processes."

Walz reiterated that he believes people "don't feel like there's a space to have that discussion."

"I'm ready for this conversation," the governor said.

On Wednesday, several elected officials responded to the act of defiance. Walz, while acknowledging the pain of those who see the statue as a symbol of genocide, ultimately stressed the importance of following the system.

"As a former social studies teacher, I taught my students that many Minnesotans look at that statue and see a legacy of genocide. Now more than ever, we must take a hard look at the dated symbols and injustices around us." The governor went on to say, "While that process was too long for those who were pained by the statue’s presence, that is not an excuse for them to take matters into their own hands and remove it in that fashion. Even in pain, we must work together to make change, lawfully. I encourage Minnesotans to have productive, peaceful conversations about the changes that need to be made to create a more inclusive state."

Flanagan reflected on the painful symbolism of the statue toward indigenous communities, on Twitter. "I can't say I'm sad the statue of Christopher Columbus is gone. I'm not. All Minnesotans should feel welcome at the Minnesota State Capitol and our state is long overdue for a hard look at the symbols, statues, and icons that were created without the input of many or our communities ... As the highest-ranking Native woman elected to executive office in the country, I have often reflected on the fact that I could see a statue honoring that legacy from my office window ... Tonight I'm thinking of all the Native children who might now feel more welcome on the grounds and in the halls of their state government."

On the other side of the political aisle, there was growing frustration that more had not been done to protect government property on capitol grounds.

“After speaking to Commissioner Harrington and learning of the decisions he made on behalf of the administration whether to protect or not to protect property on the Capitol grounds I was frustrated and alarmed the decision was made to not deploy sufficient State Trooper presence in order to protect property. There is a process to petition the removal of artwork at the Capitol, pulling it down with a rope isn’t that process," said District 47A representative Jim Nash (R).

According to a post on the Capitol Area Architectural and Planning Board (CAAPB) website, the 10-foot tall bronze Columbus statue was a gift from Minnesota's Italian American community and dedicated on October 12, 1931. It was later restored as part of preservation efforts in 1992.

Members of the Native American community have been vocal opponents of tributes to Christopher Columbus for many years, with the American Indian Movement calling Columbus a "colonial pirate" and murderer in a 2005 news release calling for an end of the Columbus Day holiday.

Similar Columbus statues were recently vandalized or destroyed in other states, including in Richmond, Virginia and Boston, Massachusetts.

RELATED: 'He is going to change the world': Funeral held for George Floyd