The Minn. senator is running at 5th place in Iowa with 75 percent of the precincts reporting, but still upbeat. 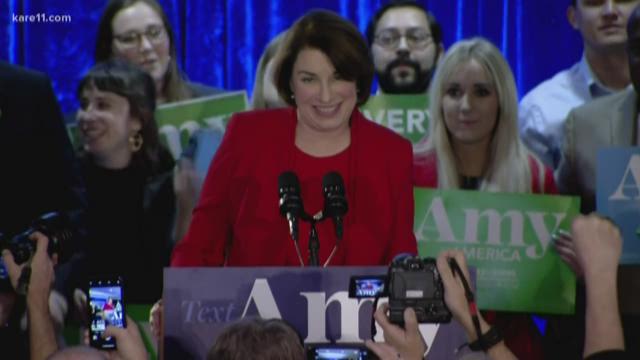 DES MOINES, Iowa — Sen. Amy Klobuchar’s told supporters in New Hampshire she feels good about her showing in the Iowa Caucuses, where partial results had her in fifth place as of Wednesday morning.

“I can tell you that we feel very good about where we are,” Klobuchar told a gathering in Concord Tuesday night.  “And we won so many precincts and delegates I don’t think people gave us a chance to win.”

Sen. Klobuchar had polled in the single digits for most of the year leading up to the Iowa Caucuses, but had 13% of the state delegate equivalent with 75% of the results posted as of Wednesday afternoon. The leaders in that race were Mayor Pete Butitgieg at 27%, Sen. Bernie Sanders at 25%, Sen. Elizabeth Warren at 18% and former Vice Pres. Joe Biden at 16%.

“What these results make clear is that this is a five-person race,” Buoen wrote. “Some of Amy’s strongest counties haven’t been fully reported and the current data doesn’t tell the full story.”

Klobuchar’s actual popular support among caucus goers may have been higher than the delegate count shows due to state’s 15% viability threshold rule within each precinct.  In other words, Klobuchar may have garnered 14% support in many precincts but have no delegates to show for it.

Iowa’s national convention delegates will be awarded based on state delegate counts, but the real significance of the Hawkeye State’s contest is how candidates perform compared to expectations. The two biggest takeaways national political pundits keyed in on were Buttigieg’s apparent lead, and Biden’s fourth place finish.

The news cycle Monday and Tuesday was dominated by the fact there were no results yet to report when it was time for the candidates to take the stage Monday night before taking flight to New Hampshire.

That was blamed on a coding error with the new mobile phone app that caucus captains were supposed to use to transmit their results to the state party. Many couldn’t get their apps to work, so they tried to phone in results and faced long delays sitting on hold.

RELATED: Are the Iowa Caucuses a fair way to start primary season?

In New Hampshire Tuesday, Klobuchar played off the turbulence surrounding the delays in Iowa.

“I’m someone that thrives in chaos. You want a steady hand in chaos, right?”

Iowa Democratic Party Chair Troy Price apologized for the confusions and delays, but assured the public the actual data – presidential preference cards filled out by caucus goers – was secure and was valid.

The campaigns didn’t dispute the validity of the results, just the delays getting them.

Polk County Democratic Party Chair Sean Bagniewski criticized the state party’s decision to roll out the app without enough time to train the volunteers who were expected to use it, and without enough technical support.

“When you have 1,700 people spread out all over Iowa, they’re getting ready for what they thought was the biggest caucus of their life, they don’t have time to download an app, get a pin, log in, and then test it in just a couple days,” Bagniewski told KARE.

He said the one bright side was that 10,000 new Democrats had been registered on caucus night which would help strengthen the party’s efforts to win back Iowa.

On Monday night, Klobuchar deftly took the stage before other candidates and capitalized on the fact the cable networks were desperate for some word from someone. She was able to grab several minutes of national TV time just by being the first to thank her supporters.

”We know results are delayed, but we know one thing: we are punching above our weight!”