On the heels of final debate in Iowa, Minnesota senator remains optimistic about doing well in the Democratic caucuses 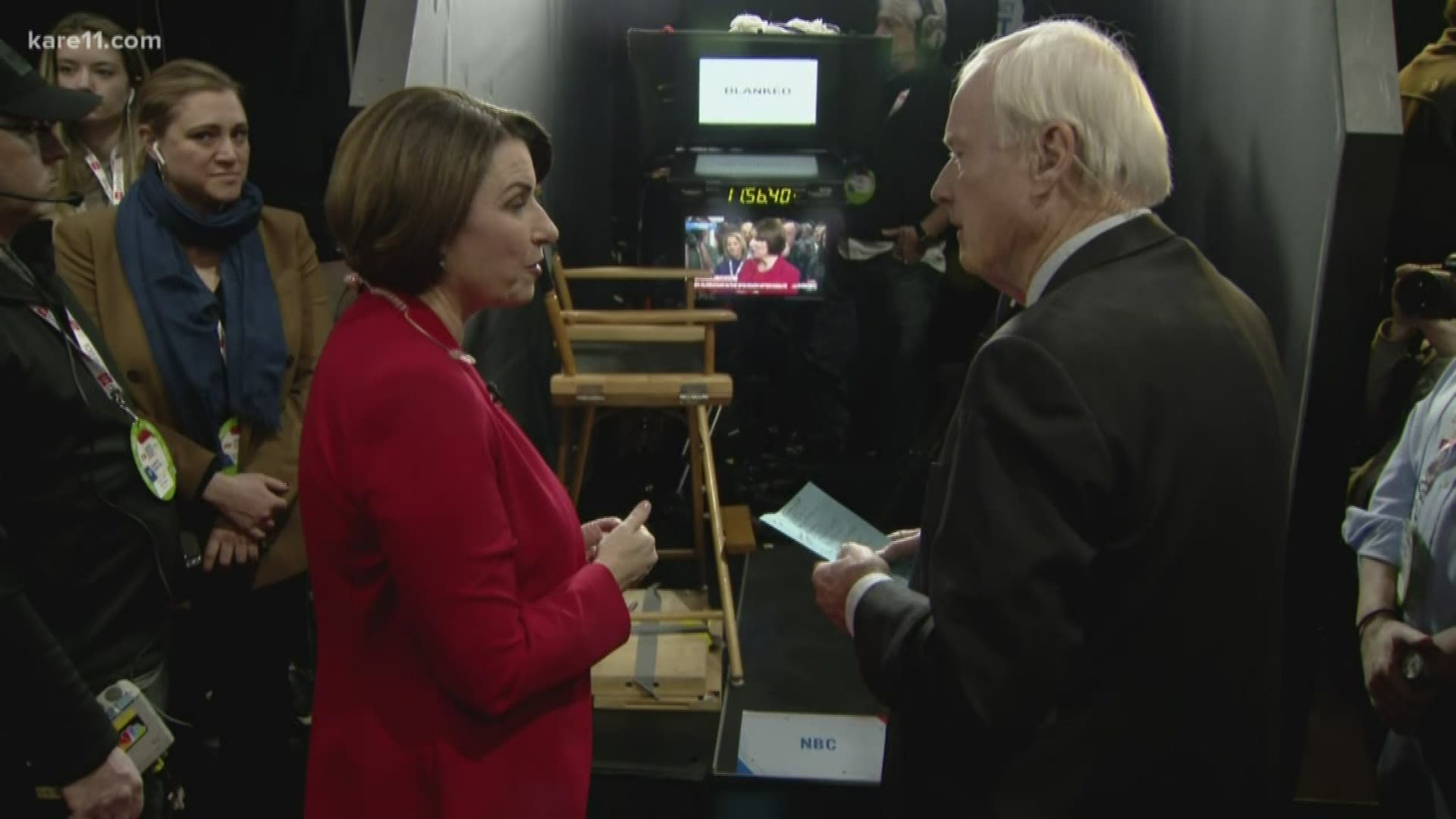 DES MOINES, Iowa — Minnesota's presidential candidate says she's in this race for the long haul and remains optimistic about her prospects in the Iowa Caucuses.

Sen. Amy Klobuchar told KARE she's not deterred at all by Iowa polls showing four other Democratic hopefuls running ahead of her.

"People better realize I’m still standing. I am one of only six people on that debate stage," Sen. Klobuchar told KARE on the heels of the final Iowa debate Tuesday night.

"That means I am ahead of every governor that ran for this office, and many of my colleagues from the Senate. We are still on the rise here in Iowa."

Indeed, there were initially a couple dozen Democrats in the field. And Klobuchar thus far has managed to meet the fundraising and polling thresholds set by the DNC to qualify for every candidate debate.

She cited a Des Moines Register poll showing many Iowans are still undecided heading into the Feb. 3 caucuses, and capable of switching allegiance. In other words, many supporters of the Iowa poll leaders -- Bernie Sanders, Joe Biden, Elizabeth Warren and Pete Buttigieg -- haven't made their final decisions.

Klobuchar received high marks again from national observers for her performance in the CNN-Des Moines Register debate but didn't garner as much buzz as the previous Dec. 19 debate in Los Angeles.

Moderators and national writers focused much of their attention on the back-and-forth between Biden and Sanders on the wisdom of the Iraq War, and who did more to prevent it and/or end it.

Klobuchar noted she wasn't in the Senate yet when those critical votes were taken, but she's dedicated to avoiding the next Middle East war.

"I think right now what we should be talking about is what’s going on with Donald Trump," she remarked. "Donald Trump is taking us pell-mell to another war.”

Pell-mell is a adverb that describes doing something in a disorganized, rushed, haphazard or confused fashion.

One of her Klobuchar's best moments came during a dust-up over whether a woman can be elected to the White House, stemming from Sen. Warren's assertion that Sen. Sanders told her a female candidate couldn't get elected.

Warren pointed out that the two women on the debate stage have never lost an election, while the men have ten losses between them. Klobuchar thanked Warren and built on that.

"Every single person I have beaten, my Republican opponents, have gotten out of politics for good," she said, to laughter.

"And I think that sounds pretty good with the guy we have in the White House right now." 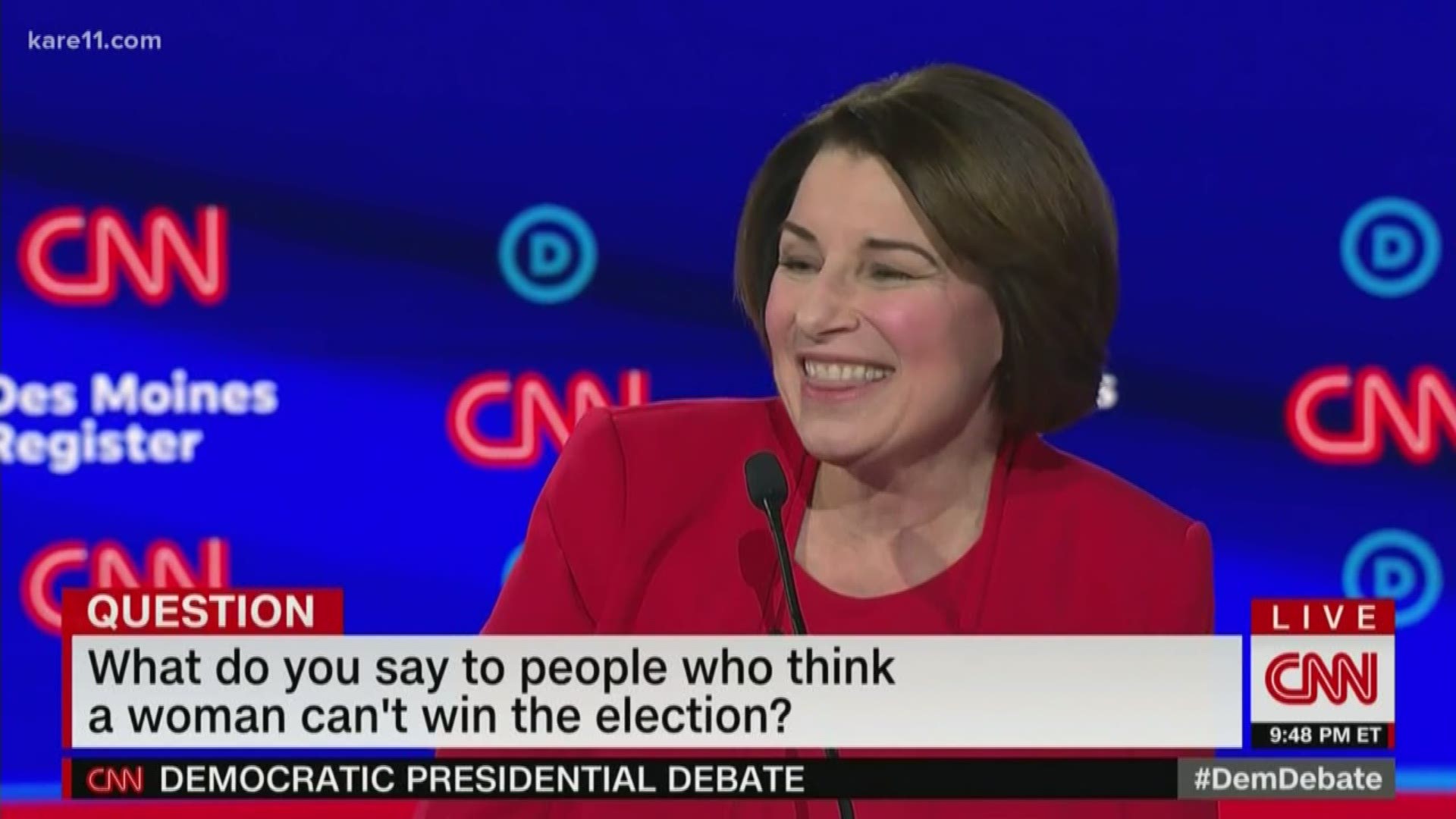 Iowa political experts KARE spoke to ahead of debate said Klobuchar has an impressive ground game in Iowa and has reached out to voters with a comprehensive advertising campaign.

She has projected herself as an electable, can-do, Midwestern moderate who has won races in Republican-leaning rural and suburban areas of Minnesota. She's made a point to visit all 99 counties in Iowa, even Republican strongholds.

But the pundits say many moderate-leaning Democrats in Iowa are backing former Vice President Biden because he's more of a known commodity from his time in the Obama Administration and his own campaign runs in Iowa.

On caucus night supporters in each precinct gather in groups according to their candidate of choice. A candidate needs at least 15 percent support to remain viable within a precinct.

If your chosen candidate doesn't meet that threshold, you're free to join one of the other candidate's groups, perhaps moving to your second or third choice if they're still viable.

But an army of Klobuchar volunteers will be going all out in the final three weeks in Iowa, and the candidate is asking her Minnesota supporters to pick up the phone.

"Minnesotans should call their friends in Iowa and put in a good word for me, like a job reference!" Klobuchar quipped.

She'll return to the Twin Cities on Friday for a 6 p.m. rally at First Avenue promoting the start of early voting for Minnesota's presidential primary, which is part of the March 3 Super Tuesday primaries in 15 states.