Klobuchar said she’ll be making an announcement on Sunday, Feb. 10, at 1 p.m., at Boom Island Park in Minneapolis. 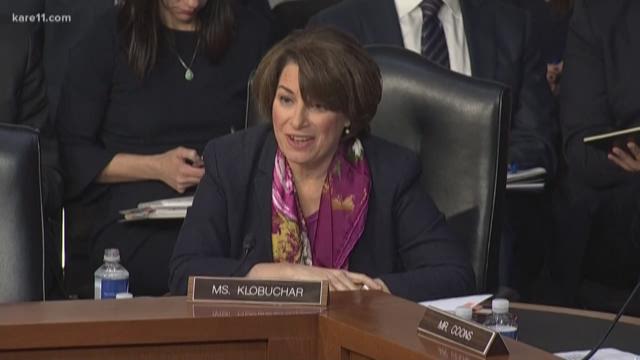 MINNEAPOLIS — Sen. Amy Klobuchar appears to be preparing to announce a presidential bid.

The Minnesota senator appeared on MSNBC on Tuesday evening after President Donald Trump’s State of the Union address.

Klobuchar said she’ll be making an announcement on Sunday, Feb. 10, at 1 p.m., at Boom Island Park in Minneapolis.

"You have been asking me this forever. Sunday come to Boom Island in Minneapolis," she said. "Boom Island, drop the mic, and then you'll find out. It's gonna be a little cold, 20 degrees, wear warm clothes."

In her MSNBC interview she criticized Trump's address, saying, "We need someone in the White House that's a hero for their time."

Klobuchar served for eight years as the district attorney in Hennepin County, prior to making her first bid for the Senate. She first made political news leading the fight for longer maternity ward stays for new moms, after her baby daughter Abigail was born with complications.

She has been widely considered a potential 2020 candidate but has not announced an official decision. In November 2018 she told ABC’s George Stephanopoulos that she was “still thinking about this.”

Minnesota political consultant Jeff Blodgett said Klobuchar’s appeal to voters is that she has a strong record on consumer issues that affect families directly, and would likely run as a problem solver candidate.

He said one advantage Klobuchar has in a crowded field is that she represents a calm, rational voice in a time when political discourse has become angry and turbulent.

Blodgett, who ran all three of Paul Wellstone’s Senate campaigns and both of Barack Obama’s Minnesota campaigns, said he believes Klobuchar will be able to fend for herself in debates with the more well-known national figures.