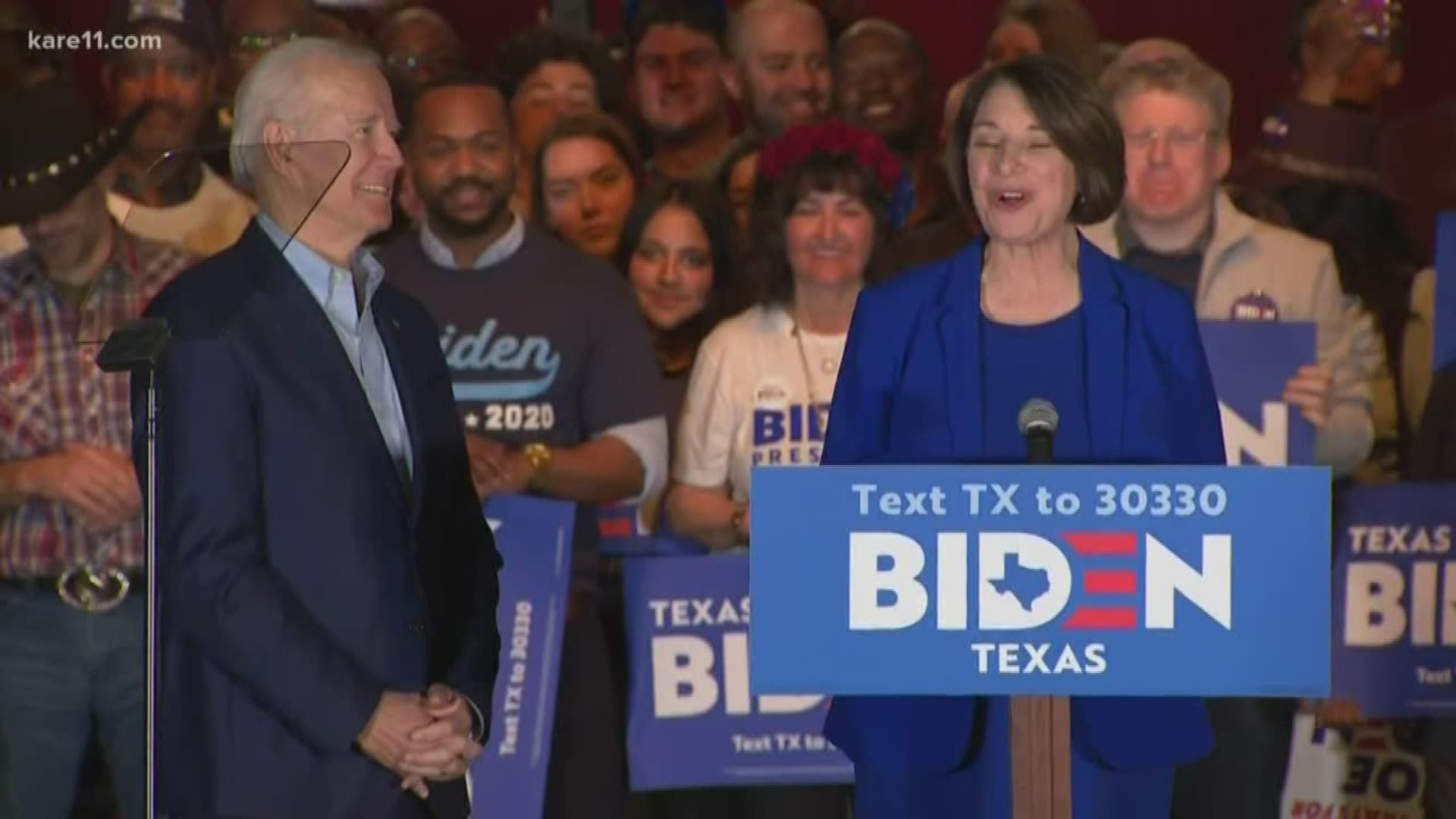 Klobuchar joined Biden at a rally in Dallas on Monday night, where she formally announced the suspension of her campaign, and her endorsement of Biden.

"I believe we can do this together, and that is why today I am ending my campaign and endorsing Joe Biden for president!"

Klobuchar's exit comes one day before Super Tuesday votes in several states, including Minnesota.  Her advice to Minnesota voters was to cast their vote for the former VP.

Klobuchar is the latest candidate to drop out of the Democratic race, following the exits of former mayor Pete Buttigieg and billionaire Tom Steyer, who both suspended their campaigns following the South Carolina primary on Saturday.

Buttigieg also appeared with Biden at a different event in Dallas Monday night, and threw his support to the former Vice President's campaign..

RELATED: Who is Amy Klobuchar?

Sen. Klobuchar had a memorable launch to her presidential campaign, announcing her bid in the middle of a snowstorm in her native Minnesota in February 2019.

Klobuchar went on to pick up several major newspaper endorsements, including an unusual dual endorsement alongside Sen. Elizabeth Warren by the New York Times prior to the Iowa caucus.

Klobuchar's strongest showing in the primary season was in New Hampshire, where she finished in third place, behind Sen. Bernie Sanders and Buttigieg.

The momentum seemingly vanished for Klobuchar in the next two states, with sixth place finishes in both Nevada and South Carolina.

Klobuchar had been in the middle of campaign appearances across the country ahead of Super Tuesday. However, a scheduled appearance back in Minnesota on Sunday night was canceled after demonstrators took over the stage to call for the release of Myon Burrell, a man convicted while Klobuchar was the Hennepin County Attorney.

Klobuchar was still actively campaigning just hours before the news broke that her campaign was ending, as she made an appearance on Monday morning in Salt Lake City, Utah.

This is a breaking news story. Stay with KARE 11 for developments.

TEXT KARE 11
For more information on Tuesday’s presidential primary, text VOTE to 763-797-7215. You can also text that number to let us know about any issues at your polling places.