Four decades after its debut, lawmakers are still discussing the layout and design of the Minnesota state flag, questioning its relevance to the state right now. 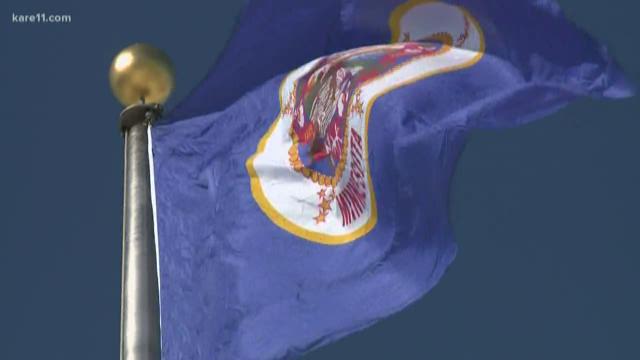 ST PAUL, Minn. — It's a symbol flown with pride across the state, from government buildings to schools.

"This conversation has been going on since I think the 1980's," said Rep. Jamie Becker-Finn (DFL) District: 42B.

However, four decades after its debut, lawmakers are still discussing the layout and design of the Minnesota state flag, questioning its relevance to the state right now.

"The design it depicts a native man sort of old timely, not modern native person essentially running away from a farmer with an ax and a gun," said Rep. Becker-Finn. She went on to say, "obviously it's just a picture but at the same time it just really isn't reflective I think of who we are as Minnesotans in 2020."

Representative Peter Fischer(DFL) District: 43A  introduced a bill at the state capitol Tuesday, and in it, house democrats have proposed creating a task force to look at redesigning the flag.

"We're the north star state, we've got the loon is our state bird, I think there are a lot of good options that would maybe be a better reflection of our state," said Rep. Becker-Finn.

In the late 80's an alternative to the state flag known as the North Star Flag was proposed by vexillologists Rev. William Becker and Lee Herold, but no changes were made.

Now, thirty years later, not every Minnesotan is on board with a proposed change.

"We sell a lot of flags in general and Minnesota is one of our top selling flags," said Tim Coil, owner of Coil's Flags and Flag Poles in St. Cloud.

Coil and his family have been selling the state flag at their flag shop for 40 years and appreciate its Native American and farming heritage.

"The flag has been this way since 1893 you know with a revision in 1957; they wanted to incorporate all these different things that made our state standout," said Coil.

State lawmakers say while its not the biggest issue up for discussion this session, if passed the future of the flag will be a collaborative effort.

"I would think that like Explore Minnesota and our tourism board would have some thoughts about it there's probably some great opportunities too to involve students and young people in coming up with ideas," said Rep. Becker-Finn.