Minnesota judges can sentence offenders to decades of probation, which makes the state an outlier when it comes to how long released felons can live under the threat of returning to prison. 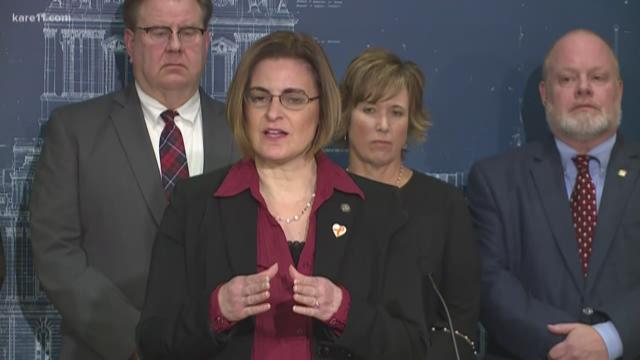 ST PAUL, Minn. — 40 years of probation for a nonviolent drug offense. It can happen in Minnesota. It does happen.

Just ask Jennifer Schroeder, who came to the State Capitol Tuesday to lend her support to a bill that would cap probation at five years except for cases of murder and sexual assault.

"I was sentenced to 365 days in the county jail, and 40 years of supervised release, or probation," Schroeder explained to reporters.

"Which means until I'm 71 years old I have the potential of going to prison for 10 years if a judge finds I violated the terms of my probation."

Schroeder said she was a drug addict when she entered the system, and once she was released she went back to school and now works as a drug and alcohol counselor.

But she won't be able to vote again until she turns 71, under current law. And her probation status continues to hamper her when it comes to applying for housing and new jobs.

"I have to do background checks that don't come back for months at a time, which means I have to disclose to everybody my past. It's hard to be taken professionally as a profession or taken seriously by anyone."

Rep. Jamie Long, the Minneapolis Democrat who is the chief author of the bill, said he's trying to tackle long probation periods as well as geographical discrepancies in probation sentences.

"Folks in other states, when they hear that we have 40-year probation terms can’t believe it. That’s not something that is normal across the United States."

He said the average probation sentence for a drug crime in Duluth is three years, compared to nine years in Rochester for a similar case.

"So that's three times as long for the same type of crime, depending on where you are in this state. That’s not right. That’s not fair."

And often one-third of the prison population is made up of people who returned to prison on a technical probation violation, without committing a new crime.

The House Public Safety Committee is also considering expanding the alternatives to incarceration program launched last year, which allows probation violators to be diverted to drug and alcohol treatment instead of going back to jail.

"We know 85 percent of those in the entire criminal justice system have a chemical dependency of some sort, so we really want to focus on, how can we help them to recover and have hope and have a new life?" said Rep. Marion O'Neill, the Maple Lake Republican who crafted the Alternatives to Incarceration bill in 2017.

She said the first pilot programs created as part of that system are showing tremendous results.

Sarah Walker, Assistant Minnesota Corrections Commissioner, said her agency supports the changes because it lower caseloads and allows the corrections system to put resources where they're needed, helping released offenders get back on their feet.

"When individuals are technically violated they often returned to prison for short periods of time in which they are essentially warehoused without any programming."

"I was fortunate, I look at it, to spend a year in jail because that is about how much time your brain needs to heal from an addiction," she said.

"And when you go in for 30 days and are sent right back into the environment you came from, you can’t expect much more."

"It's creating ways for the person to make things right, to better themselves and to reconcile with the community," Rep. Mariani, a St. Paul Democrat, remarked.

"It also recognizes that Minnesota is, unfortunately, part of the mass incarceration system that disproportionately punishes Black, Brown and Indigenous people in particular."

Schroeder doesn't make any excuses for her past mistakes, but also wondered aloud how long she'll be expected to pay for them.

"I was a drug addict, and I was putting drugs into the community, and I obviously feel terrible about that," she said.'

"When do you reach a point that what you have done, and what you are continuing to do is enough to say that you are fully a member of society again?"