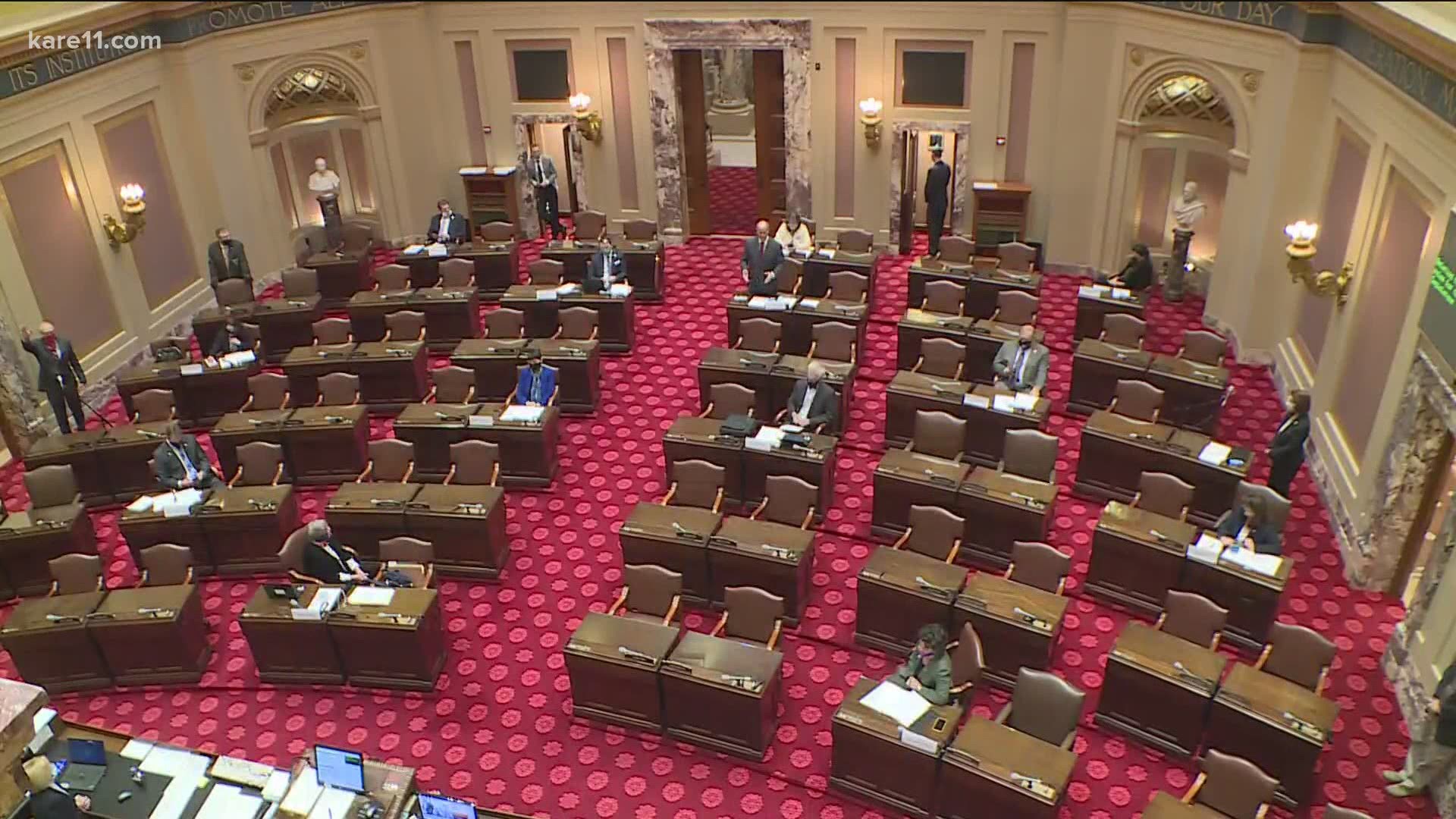 ST PAUL, Minn — Most lawmakers are already wearing masks at the State Capitol as part of an effort to prevent the spread of COVID-19, even though they're exempt from Gov. Walz's mask mandate for public spaces.

This week, Democrats asked for a change in Senate rules mandating face coverings for senators and staff in the chamber and other common workspaces in the Capitol complex.

DFL Sen. Melissa Wiklund of Bloomington asserted the requirement would encourage more members to return to the Senate Chamber, rather than voting remotely.

"There are a significant number who have chosen not to wear masks and that has a significant impact on members' comfort and willingness to be in the chamber and doing their work," Sen. Wiklund told her colleagues Thursday.

"We each come here representing our constituents and we want to do that in a safe and effective manner."

Senate Majority Leader Paul Gazelka said he appreciated the spirit of Wiklund's proposed resolution, but he opposed making masks mandatory. He said he wears a mask because so many people are concerned about coronavirus but making a mandate would be unacceptable.

Sen. Gazelka introduced an amendment to Wiklund's proposal to say masks are encouraged, rather than required.

"California has the strictest lockdown in the US and yet they have the most active COVID cases by far," Sen. Gazelka remarked.

"The way we have done it right now, not one person has been infected while doing their operation here at the Senate."

Democrat John Marty called the Republican's stance selfish, and referred to the loss of Sen. Jerry Relph, a St. Cloud Republican who died of COVID-related illnesses in December.

"We’ve lost one of our colleagues to that. Out of 67 members, we’ve lost one!" Marty exclaimed, while wearing a mask.

"I wear a mask," says @paulgazelka in closing remarks. He was among the members who had a bout with #COVID19 in November. 1 died https://t.co/4gx9qD5AdX pic.twitter.com/6CCA0cMFu8

Relph was one of several senators diagnosed with coronovirus in November after attending a Senate Republican Caucus dinner celebrating the fact they had held onto control of the Senate.

"And if some members want to be selfish and say, 'I don't feel it, I don't like it, I don't care what happens to my colleagues' - I say shame on them!"

Gazelka said those who are concerned about their health are still able to vote from remote locations, such as their Capitol offices, hearing rooms or homes. But Democrats pointed out senators can't participate in debates without physically walking into the chamber.

Gazelka's amendment to Wiklund's resolution passed on a mainly party line vote of 36 to 31. Seeing that her resolution had been watered down from "required" to "encouraged" Wiklund pulled her proposal from the table.

The DFL-controlled Minnesota House adopted a rule mandating masks be worn inside the House Chamber, even by those delivering floor speeches.

House Minority Leader Kurt Daudt argued that house members should be allowed to drop the mask while speaking, which was common practice during parts of the 2020 Session.

Daudt cited the fact that Governor Tim Walz does that at his press conferences, removing his mask while at the microphone and putting it back when he's not speaking.

Majority Leader Ryan Winkler said it's something worth considering eventually, but for the time being the mask rule is essential for protecting House staff members who are working the chamber for hours and hours on end at least four days a week.