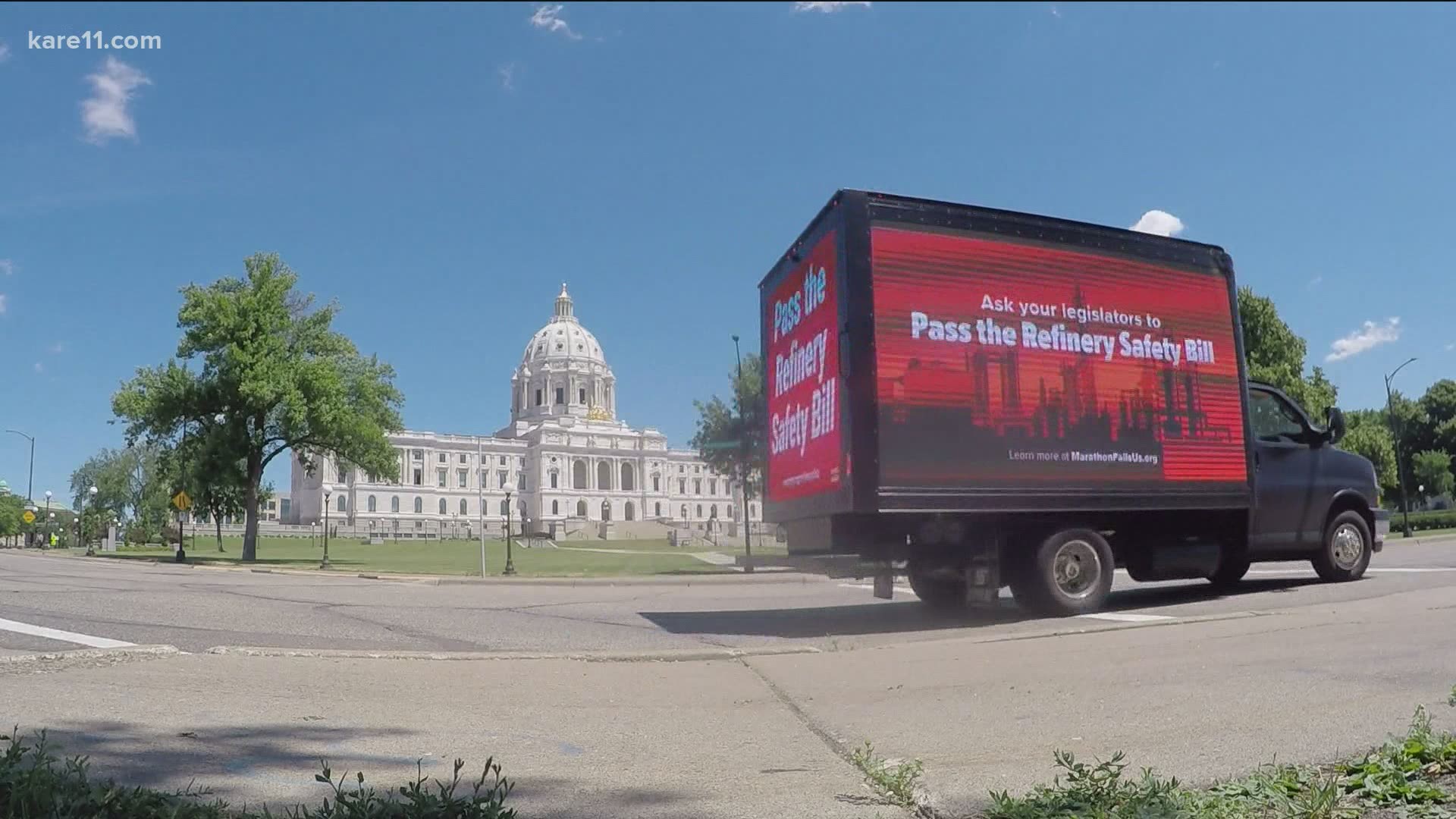 ST PAUL, Minn. — The Republican-controlled Minnesota Senate Tuesday found itself in the awkward position of undoing something that had passed just four days earlier with strong bipartisan support.

Senators stripped away language that would've required oil refinery workers to go through union-style apprenticeships. The Senate had voted last Friday to add those provisions, known as the Refinery Safety Bill, as an amendment to the jobs bill.

In total 50 out of 67 state senators had originally agreed to the language. That included Democrats, Iron Range independents and many Republicans.

But Tuesday the Senate voted to strip the refinery safety amendment and pass the jobs bill without it.

"They want to say they support blue collar workers and their families," Tony Poole, the business manager for the Steamfitters and Pipefitters Union Local 455 in St. Paul, told KARE.

"Well, today they had a chance to show that and they didn't do it."

Pool said his union's apprenticeships last five years, during which apprentice steamfitters take classes at night and are supervised by journeyman union members on the job during the day.

Republican leaders said they hadn't had time yet to vet all of the implications of the refinery bill and didn't want to insert themselves into a labor dispute.

"We want to make sure the business community and the trade communities are working together. Otherwise, I don't want to meddle in their business," Senate Majority Leader Paul Gazelka told reporters.

During floor debate Tuesday Gazelka said a good jobs bill should help both the workers and the people who employ them.

The political controversy is playing out against the backdrop of an ongoing labor dispute at the Marathon Refinery in St. Paul Park. At least 200 members of Teamsters Local 120 were locked out of their jobs at that refinery January 21 after they staged a one-day strike.

As of April 29 the company said union members can return to their jobs under the terms of a new contract offer, according to Grant Bendix of Teamsters 120. He said that offer was unacceptable to the union, and the majority of members aren't willing to work under terms they haven't voted to accept.

The majority of union members on Monday rejected the latest offer from the Ohio-based Marathon Petroleum, which has replaced the workers with managers and staff from other states. The union has repeatedly said the company isn't doing enough to address their safety concerns, while Marathon contends that safety is the company's top priority in all of its refineries.

Senate Democrats said the issue goes beyond the Marathon situation and is more about making sure people who take refinery jobs are adequately prepared for their hazardous work environment.

DFL Minority Leader Susan Kent said she very disappointed that the refinery safety amendment was pulled out of the bill.

"That is so frustrating on so many levels when you consider that 75 percent of all senators passed that bill on Friday," Sen. Kent remarked.

"They want to say they're allied with blue collar workers and people in the building trades, and they fundamentally abandoned them and protecting their safety."

One of the logistical problems with adding an amendment to any bill during a special session is that the language in the bills has been negotiated by the House DFL Majority and the Senate GOP Majority. If an amendment is added during floor debate in one chamber it would need to be added by the other chamber too.

But in this case, it appears there's also bipartisan support for the refinery safety language in the House.

"I know Democrats would like to add that to the jobs bill in the House," House Speaker Melissa Hortman told reporters late Tuesday.

Rep. Hortman said she'd have to check to see if the refinery safety amendment would be germane to the jobs bill, noting that the House has much more strict rules on germaneness - the test of whether an amendment pertains to the overall subject matter of the real bill.

"We continue to work hard to try to get a commitment from Republicans to accept this provision. We think what should happen is that the House should add it to our bill and the Senate should concur and send it to the governor."

Legislators are racing against the clock to pass 12 spending bills and a tax bill, the building blocks of a two-year balanced budget. Each spending bill relates to a different part of state government that will shut down on July 1 if the bill isn't passed and signed by the governor.

For example, state parks and the Minnesota Zoo would have to close July 1 if the Environment and Natural Resources bill doesn't get passed in time.