Preliminary Census Bureau numbers predicted back in December that Minnesota would fall short of keeping its eighth seat by 25,554 people. 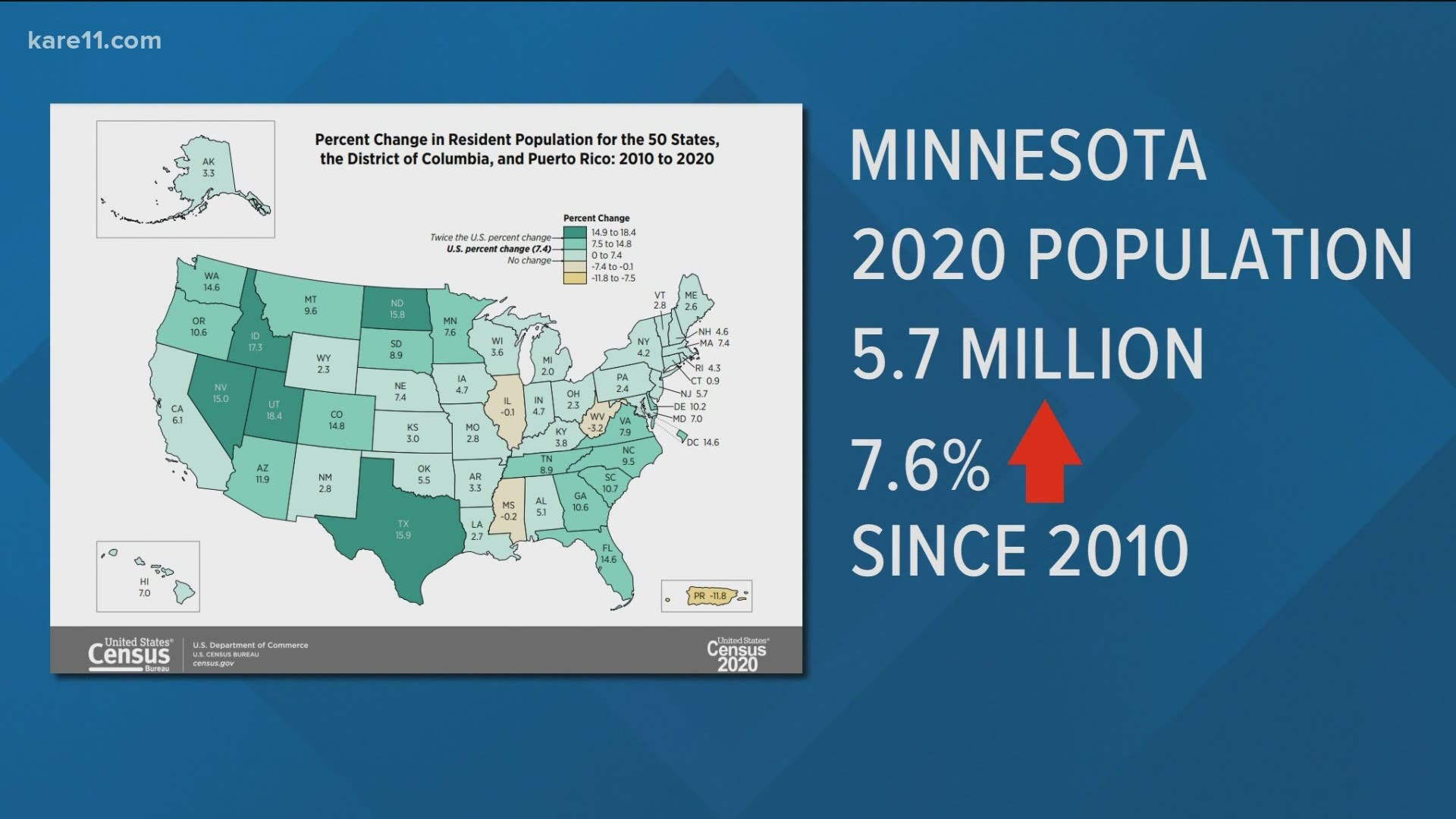 ST PAUL, Minn. — Minnesota will retain all eight of its congressional seats based on the most recent census data, the U.S. Census Bureau said in a press conference Monday afternoon.

Minnesota's 2020 population was 5,706,494, up 7.6% from the 2010 tally. And while most Midwestern states grew at a slower pace than those in the West and South, Minnesota grew just fast enough to hang onto all eight districts for the coming decade.

The North Star State grabbed the 435th slot out of 435 in the Census Bureau's apportionment ranking. New York lost one of its 27 districts, after placing 436th in that ranking by a mere 89 people.

For years now, most demographers and political insiders had assumed it was a foregone conclusion that Minnesota would lose a seat as a result of the 2020 Census. Minnesota's State Demographer, Susan Brower, thanked the people of the state for taking the headcount seriously.

The main purpose of the Census is to help draw political boundaries, and to do so in a way that — in theory — ensures equal representation in those political bodies with districts that are supposed to be proportional to population. The Census Bureau's data sets will be used to redraw political maps between now and the 2022 Election, to change the shapes of Congressional, Legislative, City, County and School Board districts.

The big winner was Texas, which will gain two seats in Congress in 2022. Colorado, Florida, Montana, North Carolina, and Oregon will all gain one seat. In addition to New York, the other states to lose one seat include California, Illinois, Michigan, Ohio, Pennsylvania and West Virginia.

The news comes after many state officials feared the state could lose one of its seats due to slower population growth. Preliminary Census Bureau numbers predicted back in December that Minnesota would fall short of keeping its eighth seat by 25,554 people. It would have been the first time the state had lost a seat since the 1960s.

"Minnesota came back with the highest response rate in the nation. And when you have a strong response rate you tend to have more accurate, more complete numbers," Brower remarked.

There's a real possibility that New York will go to court to try to keep its 27th seat, and a victory by the Empire State would mean a loss for Minnesota. The Census Bureau's top leadership expressed confidence in their numbers Monday.

"Despite all the challenges of the pandemic, the completeness and accuracy of these first 2020 Census results are comparable with recent Censuses," Ron Jarmin, the Bureau's acting director, told reporters during a news conference Monday.

"We had numerous quality checks built into collecting the data. And we did one of the most comprehensive reviews in recent Census history, during data processing."

According to the Associated Press, it will be up to Gov. Tim Walz and the Minnesota Legislature, the only one in the country where power is divided between Democrats and Republicans, to decide how to redraw voting districts. In the likely case they can’t agree, the task will fall to the courts.

News flash: Minnesota keeps all 8 congressional seats for the next decade, based on new apportionment from US Census Bureau pic.twitter.com/1anClnnSZb