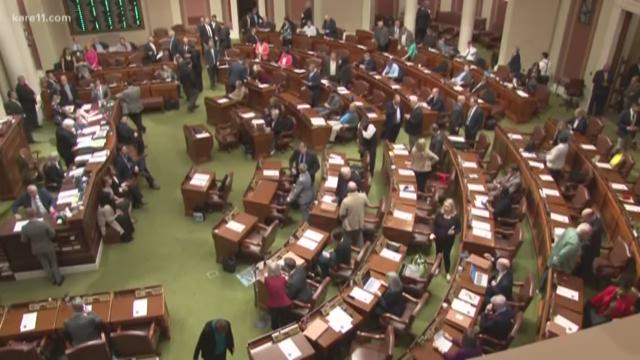 ST PAUL, Minn. — The special session of the Minnesota Legislature appears likely to last at least three days and run into the holiday weekend.

Republican House Minority Leader Kurt Daudt told reporters just before the session was called to order Friday his caucus has no plans to supply enough votes to suspend the normal procedural rules so that it could be kept to one day.

Minnesota Gov. Tim Walz called lawmakers back for the special session to complete a $48 billion state budget for the next two years.

The Democratic governor initially told them to convene at 10 a.m. Friday in hopes of adjourning before 7 a.m. Saturday.

The last piece of the two-year budget fell into place Thursday when Walz and leaders of the Senate Republican and House Democratic majorities agreed on the health and human services bill. Some Democrats are upset that several of their initiatives were cut from the final version, including a proposal to make emergency insulin supplies more affordable.

Daudt says lawmakers need time to consider the big budget bills that must pass during the special session. He objected to how they were crafted behind closed doors, and that the massive health and human services budget bill still had not been published.

Hortman pointed out that all of the bills had previously passed off the House and Senate floors and when to House-Senate conference committees May 1.

It's typical in a special session scenario to take bills up on the House and Senate floors the same day they pass out of a conference committee, but that requires suspending the rules.

And it will take Republican votes to do that, because a two-thirds super majority,or 90 votes is required. The DFL majority only controls 75 seats in the House.