During his speech, President Trump decried what he says is a "wretched Washington swamp" that is trying to overturn the results of the 2016 election. 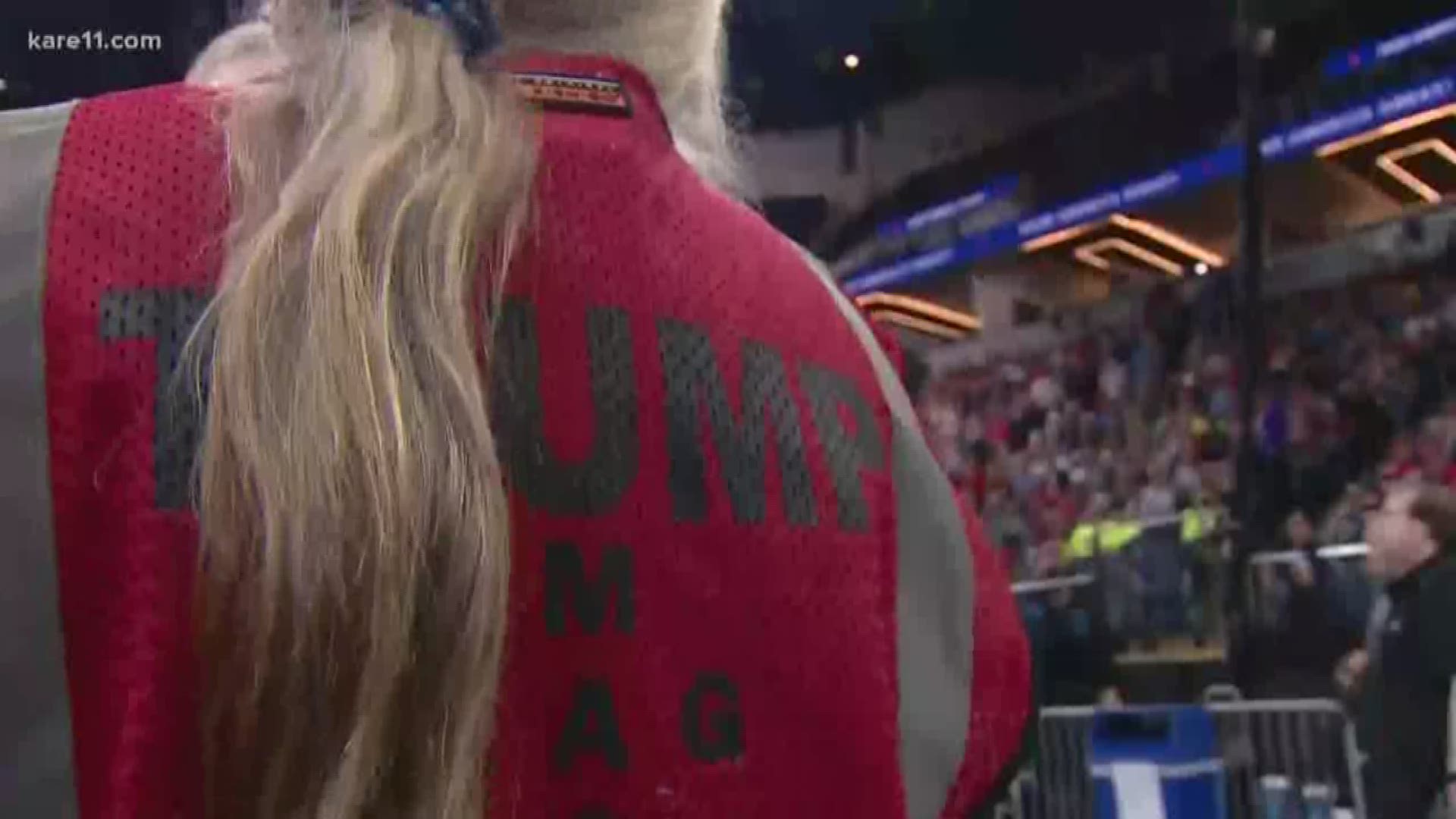 MINNEAPOLIS — After days of emotional buildup, conflict over costs and social media battles, President Donald Trump is delivering his speech to rally his supporters in an attempt to win the state in 2020.

This is Trump's first political rally since the House opened an impeachment inquiry of Trump's actions as president.

During his speech, President Trump decried what he says is a "wretched Washington swamp" that is trying to overturn the results of the 2016 election.

Trump is telling thousands at a rally Thursday in Minneapolis that the swamp wants to "erase your vote like it never existed."

But he says the swamp will fail because "in America, the people rule again."

This is Trump's first political rally since the House opened its impeachment inquiry. 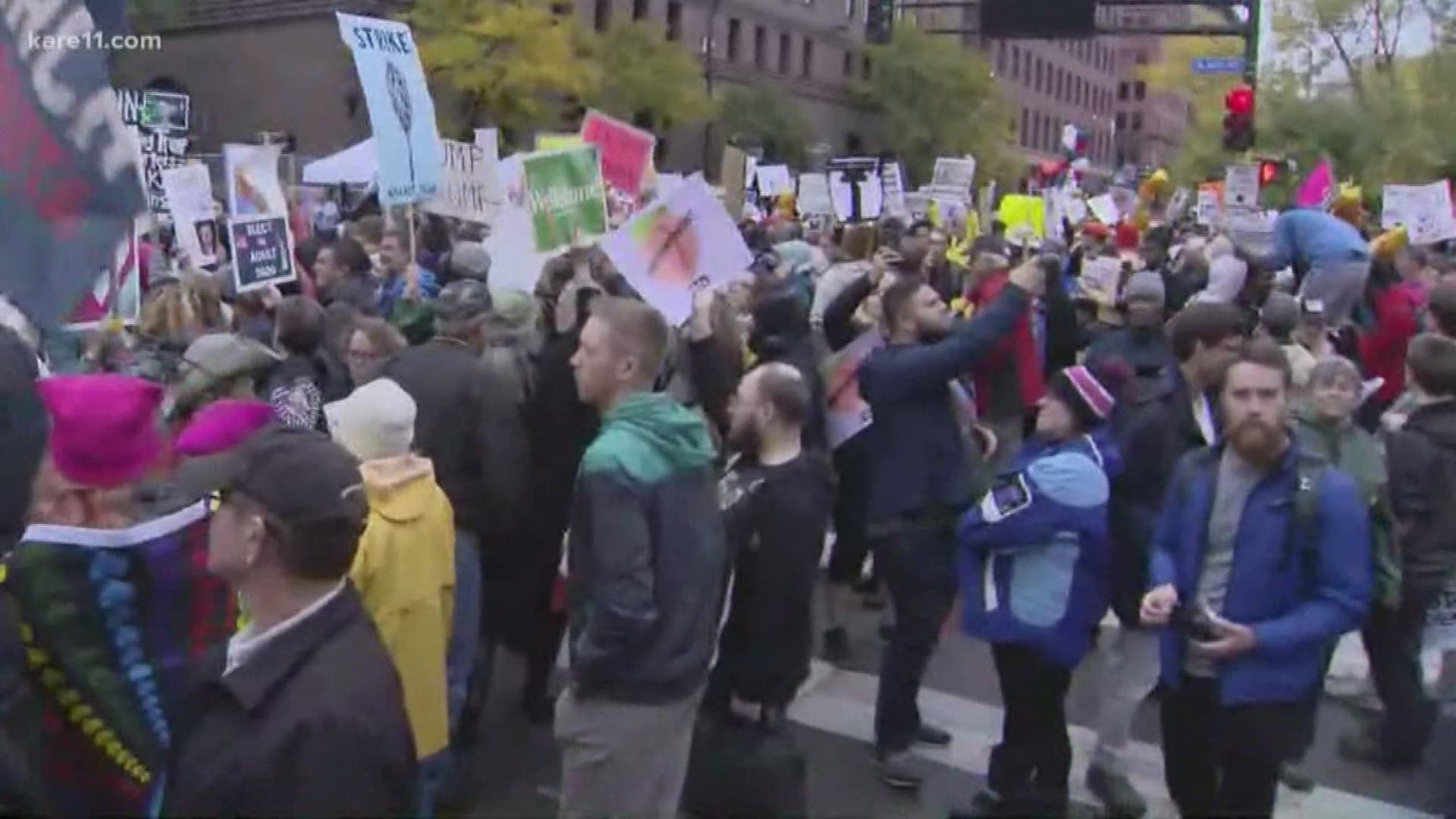 The rally began at 7 p.m. at Target Center, which has been at the center of the debate over security costs and who should pay the bill for keeping political events safe. The president is joined by Vice President Mike Pence, and what the campaign says is a sellout crowd.

A number of groups, both for and against the President and his agenda, are demonstrating outside the arena.

Earlier, President Donald Trump's son Eric warmed up the Target Center rally crowd for his father Thursday night. Eric Trump proposed a new chant to be directed at Joe Biden: "Lock him up."

President Trump has been pushing baseless claims that Biden and his son Hunter traded on the family name to earn millions from governments in Ukraine and China.

Eric Trump asked the Target Center crowd for an assessment of how Hunter Biden is feeling and suggested that the familiar Trump rally chant of "Lock her up" - directed at Hillary Clinton - become "Lock him up." The crowd then chanted, "Lock him up, lock him up."

House Democrats have opened an impeachment inquiry over President Trump's dealings with Ukraine and his request to that country's president to investigate Joe Biden.

Just before 4 p.m., President Trump tweeted that he was on Air Force One and he was on his way to Minneapolis.

Emotions are high following a dispute over who will pick up the check for a reported $530,000 in costs for police overtime, security measures and site preps. The conflict led to a Twitter spat between President Trump and Minneapolis Mayor Jacob Frey, with an army of social media users chiming in on both sides. Trump labeled the mayor as a “lightweight” and accused him of trying to infringe on freedom of speech, while Frey chided the president for forcing taxpayers to cover his bills.

In a statement sent to KARE 11 and other media outlets Tuesday, Chief Arradondo promised that his officers and other law enforcement professionals deployed downtown during the rally “will be focused on ensuring the safety of ALL who will participate in practicing their first amendment rights, which include Freedom of Speech, Freedom of the Press, and Peaceable Assembly.”

“The Minneapolis Police Department intends to provide a safe and peaceful opportunity for people to exercise their Constitutional rights. As such, I must emphasize that criminal conduct by anyone, including property damage, will not be tolerated,” Arradondo said in his statement. “Those individuals choosing to engage in such illegal behavior will be arrested and we will work with our criminal justice agencies to ensure they are properly charged to the full extent of the law.”