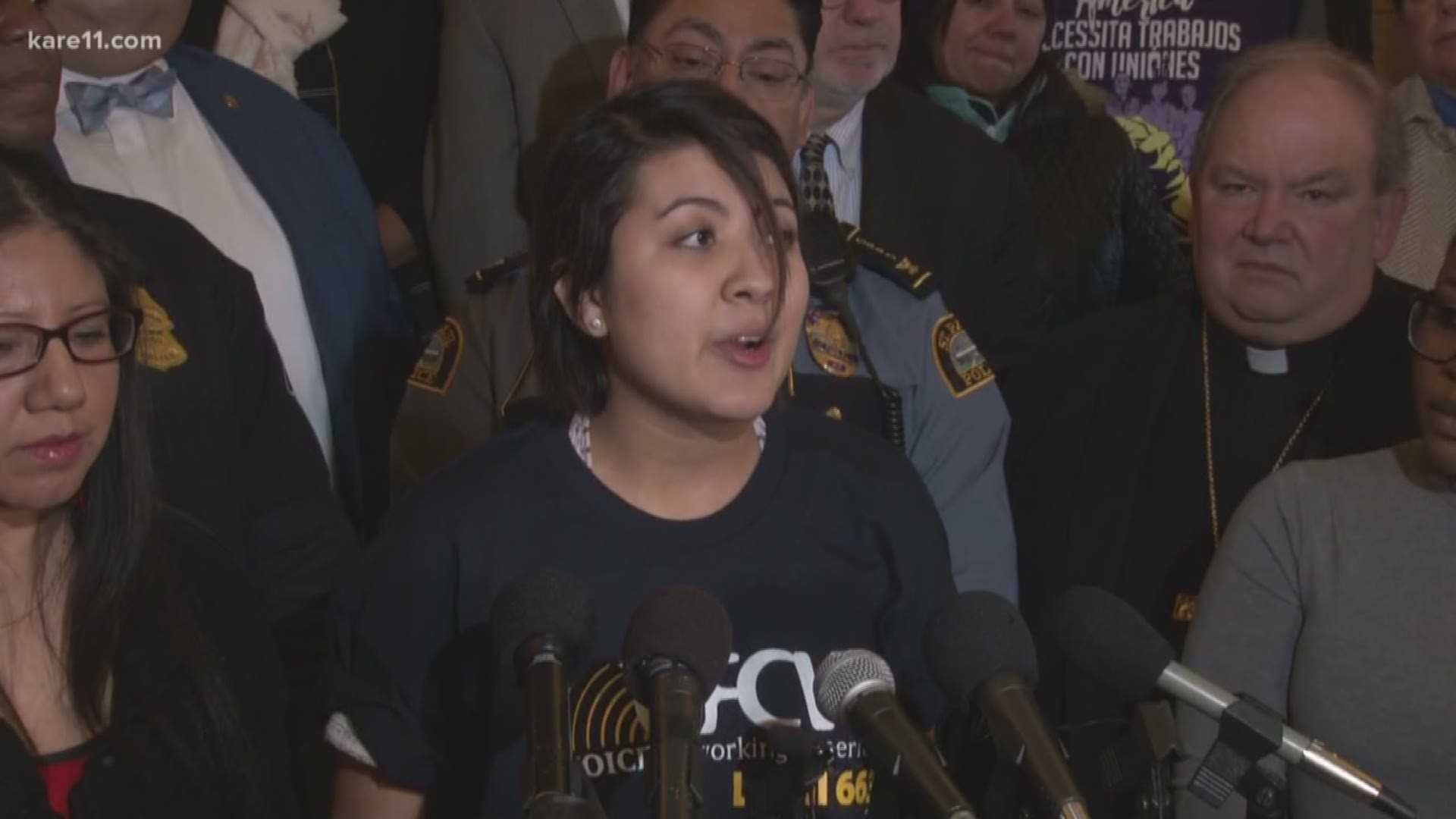 ST PAUL, Minn. — A broad coalition working under the banner of "Freedom to Drive" rallied at the State Capitol Thursday, renewing the push to grant special driver's licenses to undocumented immigrants.

"Minnesotans deserve the chance to live and grow and go wherever they want to without fear," Veronica Orrellana of Worthington told reporters.

Orrellana is protected from deportation for the time being by virtue of being a DACA recipient but told of how she and other immigrant students missed out on extracurricular activities because her mother feared being pulled over in traffic.

"I want to live a normal life too. I think every child deserves that."

Jovita Morales of the Minnesota Immigrant Movement talked of the fear she and others have of driving their children -- many of whom are U.S. citizens -- to places they need to go.

"This license is tied to being able to go to work and take our children to the doctor, to school, to the laundry, the grocery store all while having the security of being able to return home and embrace our family," Morales explained.

A large crowd that included clergy, law enforcement officers, union activists, business owners and lawmakers filled an enormous marble staircase behind Morales, Orrellana and other speakers at the rally.

Liz Rammer of Hospitality Minnesota said immigrants play a vital role in the restaurant, hotel and resort industry in the state at a time of tremendous workforce shortages.

"Our immigrant workers are wonderful contributors to their communities where they live," Rammer said.

"They’re entrepreneurs and we want to support them by enabling them to go to and from their jobs safely and legally."

David Buck, a Goodhue dairy farmer who heads the Minnesota Milk Producers Association, stepped up to the microphone to endorse the bill and talk about how hard immigrants work.

"Minnesota Milk has a long-standing policy of supporting licenses for the immigrants," Buck told the media.

"We’re in a rural area. It’s their only way to get to their job – they can’t hop on a bus or a light rail or anything."

The idea has picked up steam in recent years and has the support of Gov. Tim Walz.

It remains controversial with some conservatives who've said they fear the licenses could somehow become a pathway to legal status or make it possible for non-citizens to vote.

Nothing in this legislation would change the federal status of those immigrants or allow them to vote, but the idea still remains unpopular with most Republicans.

Senate Majority Leader Paul Gazelka, who will have final say on whether the bill gets a vote in the Republican-controlled Senate, gave it slim chances. He said the GOP majority has little interest in taking action that will aid people in the country illegally.

He said the legislature should prioritize helping people who are in the country legally before turning their attention to the problems of undocumented immigrants.

"What we can do is make sure our roadways are safe, and when people are driving they can get insurance and have a road test and have a driver’s license test," Rep. Winkler asserted.

"We can say that we are firmly on the side of decency and respect for people who are working and contributing to our communities."

Winkler also noted some immigrants did receive driver's licenses in Minnesota before 2003, when then-Gov. Tim Pawlenty ordered the Dept. of Public Safety to end the practice.