Rep. Ilhan Omar and her top challenger in the DFL primary held dueling press conferences Wednesday, each with testimonials and pointed criticism of their rivals 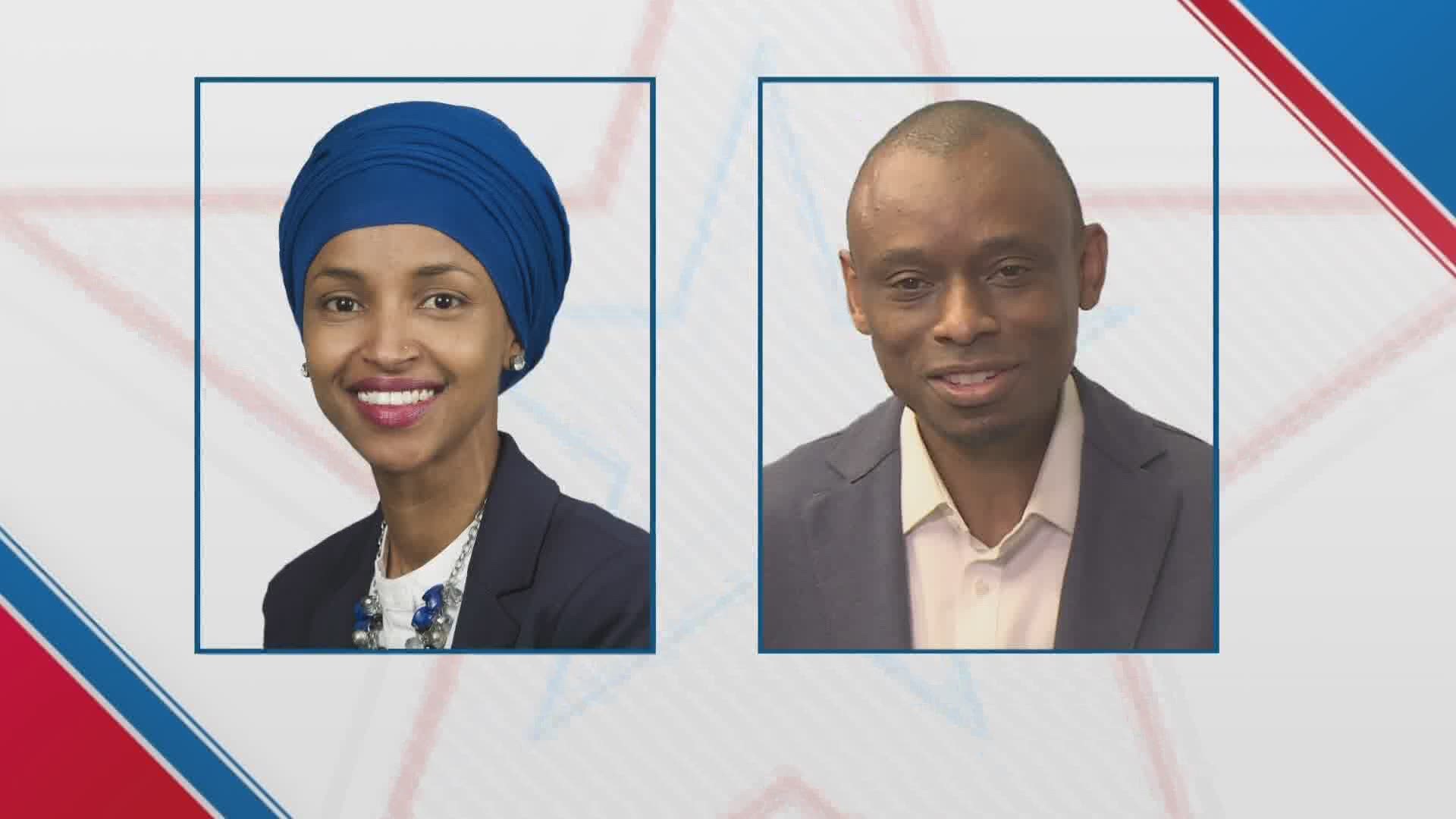 MINNEAPOLIS — Six days before voters go to the polls in Minnesota's 5th Congressional District, Rep. Ilhan Omar and her lead rival in the DFL primary are pulling out all the stops.

Rep. Omar and fellow Democrat Antone Melton-Meaux both held lengthy press conferences Wednesday to showcase some of their top supporters, and to land some rhetorical punches.

"I knock on a lot of doors and what I hear on the doors is people who say, 'How atrocious it is that people spent so much energy in mudslinging? How can somebody run on a campaign to end divisiveness and bring so much division'?" Omar told reporters at DFL headquarters in St. Paul.

Omar, in her freshman term after becoming the first Somali immigrant elected to Congress in 2018, was referring to an unprecedented advertising blitz by Melton-Meaux and pro-Israel political groups that are determined to see her unseated.

Melton-Meaux, a mediation attorney and minister, is a political newcomer. But he has raised three times as much money as the DFL-endorsed incumbent Omar.

"We don’t need bridge burners. We need bridge builders!" Melton-Meaux declared, while surrounded by supporters at a press event in South Minneapolis.

"We don’t need celebrities seeking the limelight. We need people that are willing to serve you!"

The primary in congressional district 5 attracts so much attention and money because it's highly likely the winner of this contest will win the November Election. Voters in that district, which encompasses Minneapolis and some suburbs, haven't sent a Republican to Congress since 1960 when Rep. Walter Judd won his tenth and final term.

Longtime Richfield City Council member Edwina Garcia is among those endorsing Antone Melton-Meaux in CD5 Democratic primary. Calls the candidate someone who will unite people pic.twitter.com/Psyq0kVpGU

Added to the mix this time around is that Omar was involved in several controversies that drew the ire of Republicans and some Democrats, including social media statements criticizing a pro-Israel lobby group's influence in Washington.

She also ran afoul of some campaign spending rules while a member of the Minnesota Legislature, actions her supporters write off as rookie errors.

Melton-Meaux hosted a series of supporters who spoke on this behalf, including former NAACP head and Black Lives Matter co-founder Nekima Levy Armstrong. She said she met him years ago when he served as the mediator on a civil rights case she was handling.

"I was immediately impressed by his humility, by his intellect, by his problem-solving skills, his listening skills and his integrity," Levy Armstrong told reporters.

"And he’s been out there on the front lines marching at Black Lives Matter protests, alongside me and others demanding justice."

Across town at the Omar event, a lineup of a more than a dozen leaders sang the praises of the incumbent, including Philando Castile's mother Valerie Castile.

She said she was especially thankful for Omar's work on the "No Shame at Schools Act" designed to prevent children from being stigmatized for not having money to pay for school meals.

Liberian Civil War refugee Linda Clark thanked Omar for her advocacy to win Deferred Enforced Departure, or DED, status for Liberians when they were threatened with the prospect of being deported.

"She's someone who understands the struggle we face because she’s an African immigrant herself, a refugee from a civil war. She knows exactly the fear and the powerlessness that comes with fleeing your home."

Valerie Castile among those speaking on behalf of incumbent Ilhan Omar outside DFL headquarters in St Paul pic.twitter.com/o7eBekUTQB

RELATED: "You need our votes, we need you." Business owner calls on city leaders to help rebuild after riots

The events took place a day after the DFL Party filed a formal complaint with the Federal Election Commission, accusing Melton-Meaux of violating campaign finance laws by concealing the actual names of the consultants and contractors who are producing and placing his ads.

Melton-Meaux said those contractors organized under new corporate names intentionally to avoid being blacklisted by the Democratic Congressional Campaign Committee for working with a candidate challenging an incumbent.

"They're basically going to put these folks out of business, so now the individuals and organizations have to protect themselves and they’ve done it in a legal way," Melton-Meaux told reporters.

He noted that the FEC currently can't meet to make rulings on complaints because they lack enough members to have a quorum.

'It's frankly a desperate attempt by the DFL to resurrect Congressman Omar’s campaign that is falling apart."

He questioned Omar's decision to hire her husband's political consulting firm, something that has been highlighted in numerous attack ads and mail hit pieces.

Omar continues to maintain the money spent with the E Street Group isn't pocketed by her husband, Tim Mynett. She says it goes directly to the campaign's advertising expenses.

She expressed confidence that she'll have a strong showing in Tuesday's primary.

"Paul Wellstone used to say you campaign as if you are 20 points down," Omar told reporters. "And so, the work that we do is to organize our collective voices, not only for a win in an election cycle but around the causes that we care about."