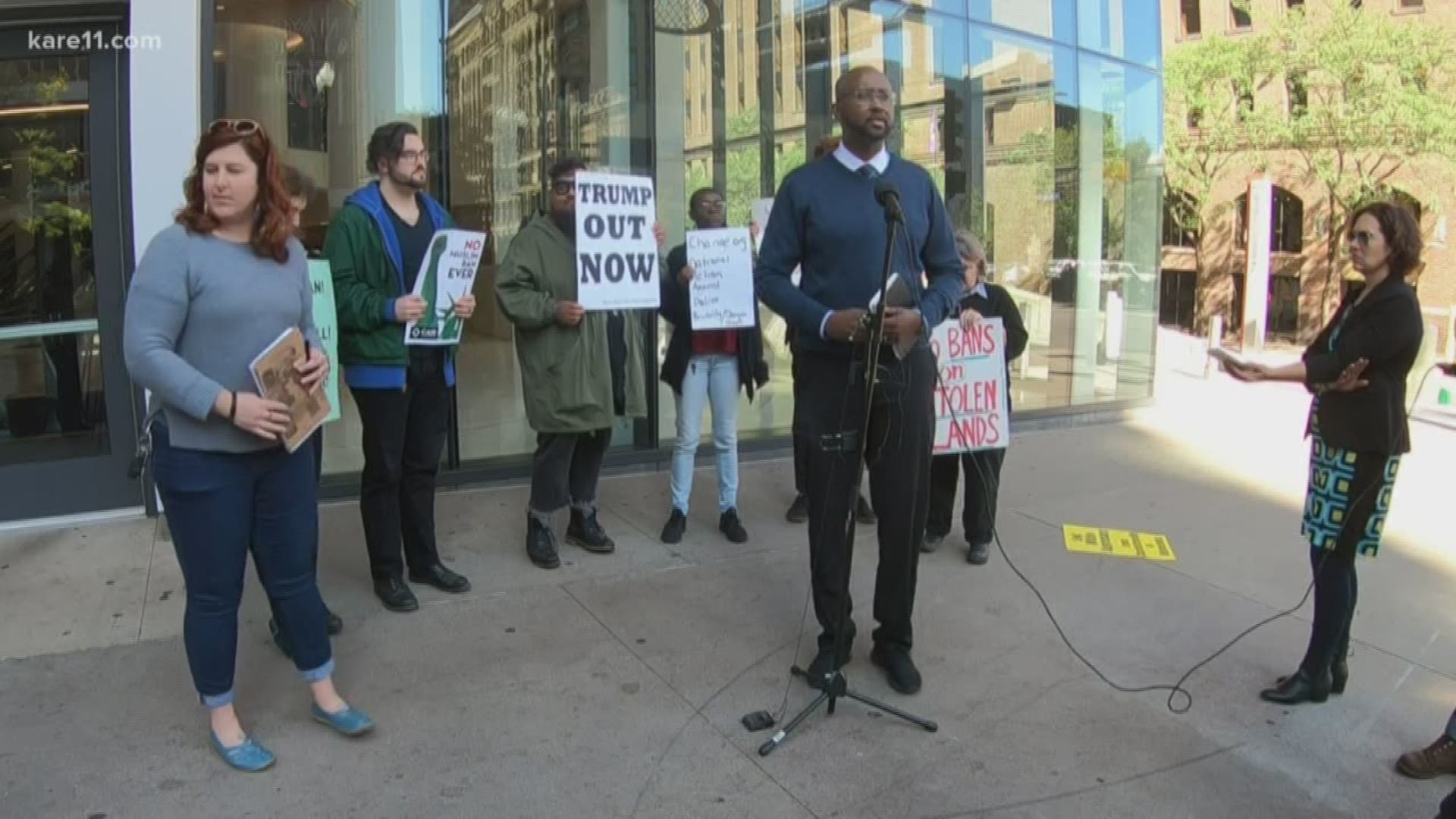 They're predicting that thousands will converge on the congested area around the Target Center starting at 5:30 p.m. that evening, in an effort to counter the message the president's supporters will be hearing indoors.

"This group of people and all of the coalition have signed onto an agreement of making sure this rally and this protest is peaceful for everyone," Jaylani Hussein of the Council on American Islamic Relations, or CAIR, told reporters Monday.

Other groups that joined Hussein Monday afternoon outside the Target Center included the Anti-War Committee, Twin Cities Coalition for Justice for Jamar and a member of the AFSCME government workers union.

Several other groups have gone to Facebook and other social media to invite people to the protest, citing the president's immigration policies and other hot button issues.

In a 2016 visit to Minneapolis, then-candidate Donald Trump decried the fact the city has a large population of Somalians who "came here without your approval or knowledge."

Since being elected the president has tried several times, with varying degrees of success, to ban immigration from most Muslim-majority nations. And he has relentlessly criticized Rep. Ilhan Omar, a Somali refugee who represents Minneapolis in Congress.

"The impact on the immigrant community in this country with the policies of this administration is hurtful," Hussein said.

"It is un-American, and it’s a sad reality that we live in today."

Hussein said the number of hate-motivated crimes against Muslims in Minnesota has increased since Trump became president, citing vandalism against Somali-owned businesses last week and the bombing of a Bloomington mosque.

He told reporters he is especially concerned about rumblings on social media about armed militias coming to the city to defend Target Center and the president against anarchists.

Chief Medaria Arradondo issued the following advisory to those planning to protest:

"The MPD will administrate a comprehensive, operational public safety plan which includes a highly visible and robust police presence in and around Target Center on Thursday.

Because we expect larger than normal crowds for this Thursday’s events, both vehicular and pedestrian traffic will be significantly reduced around the Target Center in order to increase the public safety for all.  These areas will be clearly marked.  I am strongly urging all those who attend not to bring items such as:

As peace officers everyone’s safety and security is of our utmost importance.

The Minneapolis Police Department intends to provide a safe and peaceful opportunity for people to exercise their Constitutional rights.  As such, I must emphasize that criminal conduct by anyone, including property damage, will not be tolerated.  Those individuals choosing to engage in such illegal behavior will be arrested and we will work with our criminal justice agencies to ensure they are properly charged to the full extent of the law." 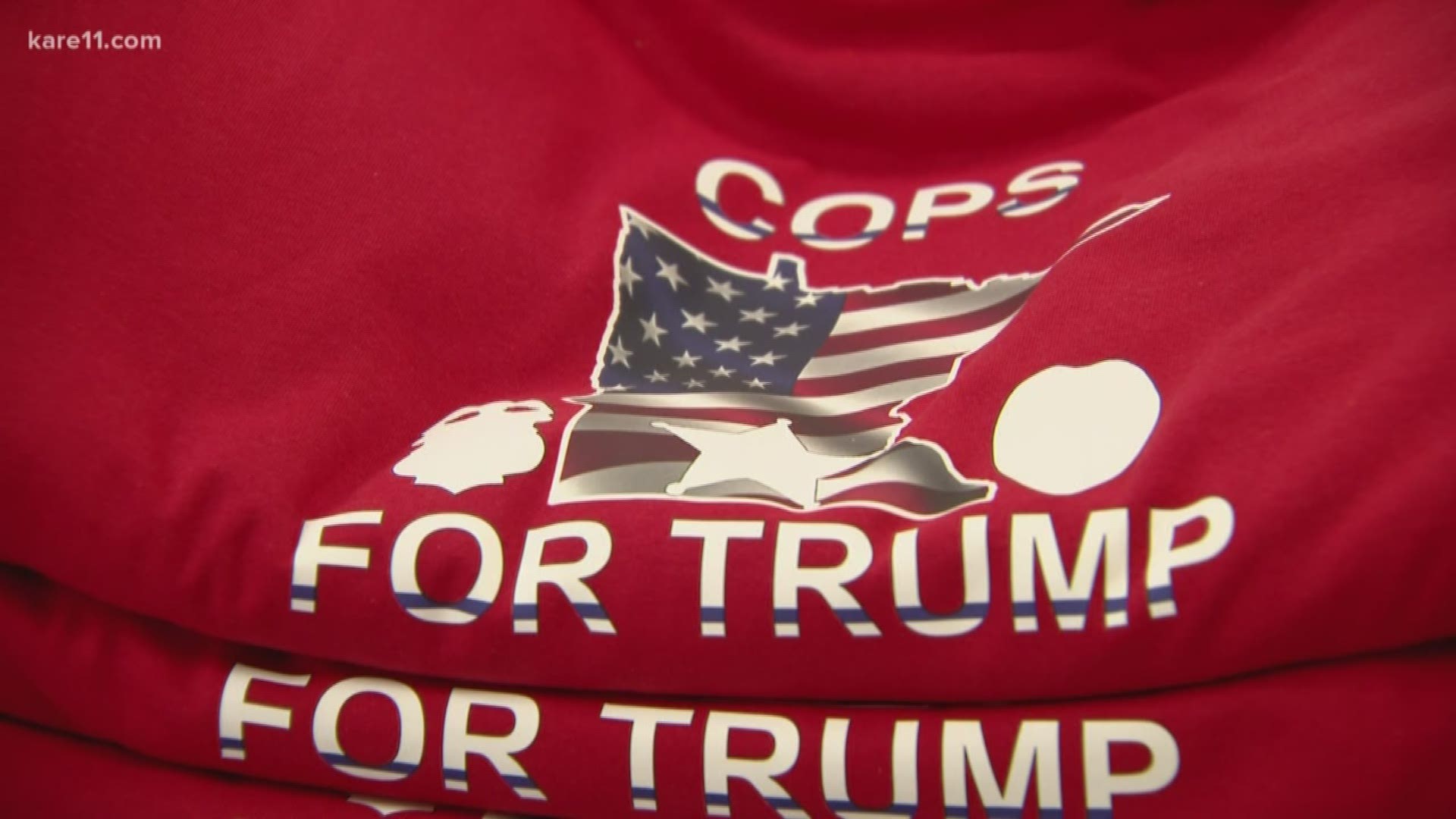 It's happening against a backdrop of a feud between the Minneapolis police union and Mayor Jacob Frey. The mayor announced that the city would enforce the rule that off-duty officers can't appear in their city-issued uniforms at political rallies, including the upcoming one at the Target Center.

The union responded by ordering "Cops for Trump" tee-shirts, which were selling quickly Monday. The union insists that officers appeared in uniform on stage at previous events with Presidents Bill Clinton and Barack Obama.

The Clinton event in August of 1994 was at a National Association of Police Organizations convention. In file video then-New York Mayor Rudy Giuliani can also be seen on stage applauding the president.

The Obama event in February of 2013 was a gun violence summit held in conjunction with local law enforcement leaders and federal prosecutors.