The president made some remarks after landing at Minneapolis St. Paul International Airport, then headed south for a stop at North Star Aviation in Mankato at 2 p.m. 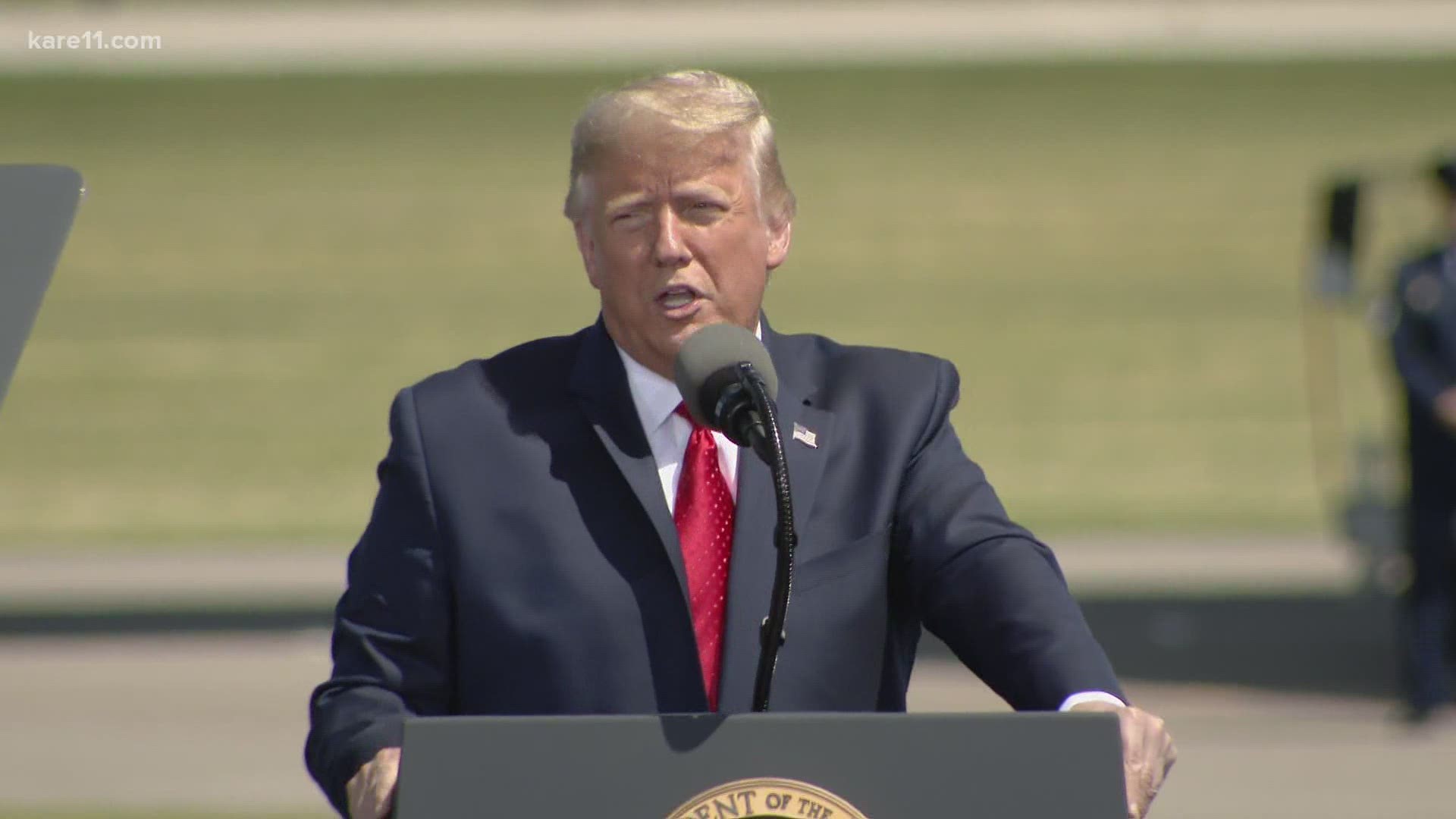 MANKATO, Minn. — President Donald Trump stopped in Minnesota, part of a campaign swing that included stops in Wisconsin and Arizona Monday, just as the Democratic National Convention kicks off.

The president landed at Minneapolis-St. Paul International Airport shortly before 12:30 p.m., and made some remarks before heading south for a stop at North Star Aviation in Mankato, Minnesota, at 2 p.m.

Trump took the podium with "God Bless the USA" playing in the background, and then laid out a message that is expected to be central to his late campaign, public safety. The president said he had traveled to Minneapolis to meet with small business owners “who were victims of the violence and destruction on the streets of Minneapolis.”

“All they wanted was to live the American Dream ... their dreams were burned to the ground,” he said, as a small group stood to the side.

Trump criticized Democrats and Minneapolis Mayor Jacob Frey, declaring “we will bring back law and order to your community.” 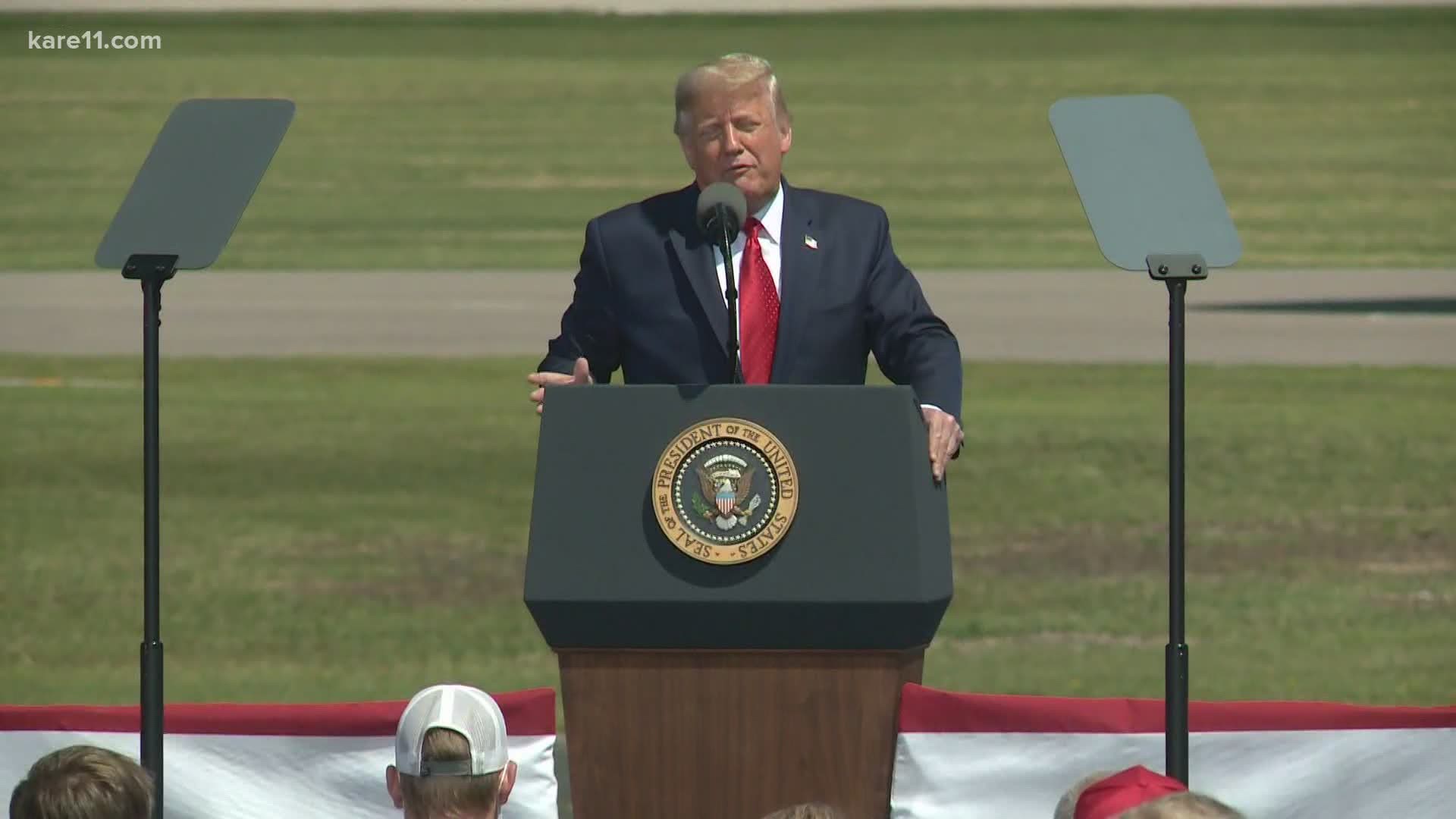 After taking several shots at presumptive Democratic nominee Joe Biden and running mate Kamala Harris, Trump promised the crowd that Nov. 3 would be "an election like no other."

Air Force One arrived in Mankato approximately 15 minutes early, and the president got down to business. He mounted attack after attack on Biden, who he repeatedly referred to as "Sleepy Joe." He called Biden a radical who wants to "eliminate police,"  and said his Democratic rival invites "left wing fascism."

Before concluding his speech, Trump shifted focus back on Minnesota Democrats, including Rep. Ilhan Omar, who recently won the 5th congressional DFL primary, and showed his support for former U.S. Representative Jason Lewis, who is running for U.S. Senate against Sen. Tina Smith.

The President has been sprinkling in attacks on “Sleepy Joe,” suggesting he often says the “wrong thing.” pic.twitter.com/tykxjTBEdr

After his appearance in Mankato, Trump will depart at 3:20 p.m. for a short trip to Basler Flight Service in Oshkosh, Wisconsin at 4:30 p.m.

The president's campaign said Friday that he will highlight “Joe Biden's failures on jobs and the economy” during his two airport events.

Minutes before setting down in Minnesota, Trump posted on Twitter saying Air Force One was getting ready to land in Minneapolis, and that the National Guard had "saved the city from further destruction," referring to the nights of unrest following the death of George Floyd.

"Should have been called up sooner by local government!" the president added.

Getting ready to land in Minneapolis. Our great National Guard saved the city from further destruction. Should have been called up sooner by local government!

While his supporters are obviously enthusiastic about Trump's Minnesota visit Monday, those backing Joe Biden, including Gov. Tim Walz, are not as excited.

“When President Trump lands in Mankato today, two things will be top of mind for Minnesotans: his inability to confront the health and economic impacts of COVID-19 and the divisive rhetoric that has defined his presidency," reads a statement from Walz released Monday morning. "Minnesotans value hard work, compassion, and human decency, and our state deserves a partner in Washington who will work with us to address the most pressing challenges facing communities throughout our state."

“The President’s campaign stop in Mankato today is simply meant to stoke fear and division, which should not come as a surprise to anyone who has watched this administration these last four years," added Lt. Governor Peggy Flanagan. "The emphasis, both over and unspoken, has been to divide this country along the lines of race and class."

Following Trump's visit to Oshkosh on Monday, Vice President Mike Pence was slated to appear in the small Wisconsin village of Darien, near the Illinois border, on Wednesday.

On the day the Democratic National Convention opens, President Trump is making his own 2 p.m. stop in Minnnesota at an airport hangar in Mankato. This is the 1st Congressional District (formerly represented by Gov. Walz) where Republican Jim Hagedorn won narrowly in 2018. @kare11 pic.twitter.com/brMsyoaF5R

Milwaukee was supposed to host more than 50,000 people for the convention, but due to the coronavirus pandemic it turned into a virtual event with Biden and other speakers not traveling to Wisconsin.

The DFL plans to respond to President Trump in a planned call, involving DFL Party Chairman Ken Martin, Minnesota Attorney General Keith Ellison, Speaker of the House Melissa Hortman and others. The topic, according to a press release, will be the president's "failed leadership on the coronavirus pandemic and the effects on Minnesota's families and economy."