Thompson's wife Lea Austin-Thompson chided the media for digging into her family's personal lives and said her husband won't give up his seat voluntarily. 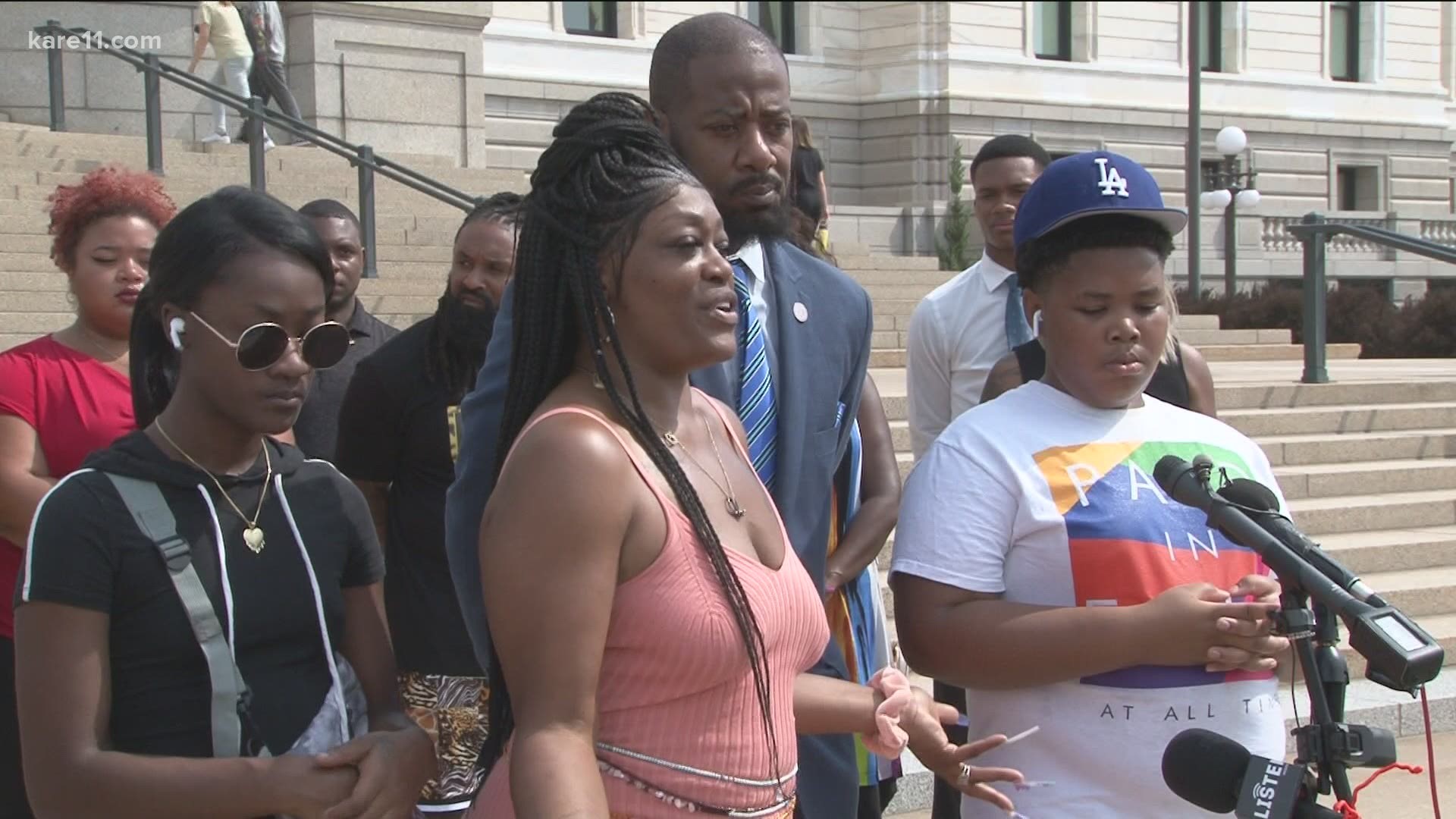 ST PAUL, Minn. — Embattled state lawmaker John Thompson made it clear Monday he's not going to resign from the legislature, despite calls to do so by top DFL leaders, including Gov. Tim Walz.

Thompson's wife headlined a Minnesota State Capitol press conference, during which she chided the Twin Cities news media for digging up police reports from many years ago and invading her family's privacy in the process. She said her children have been traumatized to suddenly learn about things that happened when they were too young to remember.

"My husband and I have been through things. We didn't always agree with things. But I have never been abused. He never has abused me," Lea Austin-Thompson told reporters.

She said the two had been together for 21 years and have had a healthy, stable relationship, especially since 2010 when Thompson's divorce from his first wife was finalized. Austin-Thompson said she was a woman in her 20s during some of those domestic violence calls detailed in police reports, and that she felt pressured by police to blow things out of proportion at times.

"What these people in these offices here are going to have to do is take Team Thompson kicking and screaming and holding onto his desk. We're not resigning, we're going to fight."

Among those who spoke on Thompson's behalf at the capitol news conference were St. Paul City Council Member Nelsie Yang and longtime St. Paul civil rights leader Nathaniel Khaliq. They said it should be up to the voters in his district to decide whether he can still effectively represent them.

"I believe it’s in the best interest of John Thompson, his family, and the institution for him to resign.

As the Speaker of the House, I have limited options in these instances, including removing a member from committees. The Ethics Committee has a broader range of options available to it, and the Speaker does not personally file ethics complaints. I believe it is important that matters relating to Representative John Thompson proceed through the Ethics Committee process and that the House as a whole makes a final decision on any consequences that it deems appropriate."

While the event was in progress, a woman drove an SUV up the capitol mall sidewalk in the direction of the steps where reporters and participants were standing. She turned before reaching the steps and stuck a large Trump flag out of the driver's side window and began to yell curse words about Democrats, Gov. Tim Walz, St. Paul Mayor Melvin Carter and Minneapolis Mayor Jacob Frey.

When state troopers from the capitol's security detail arrived to confront the woman, she drove in circles around the capitol lawn before exiting onto Rev. Dr. Martin Luther King Jr. Drive, where troopers stopped her. It took nearly an hour for a mental health crisis team to talk the woman into leaving her SUV and letting troopers take her into custody.

The most recent controversy surrounding Thompson is whether he actually apologized to Sergeant Peter Crum for accusing him of racially profiling him during a July 4 traffic stop. Thompson said he did visit with Sgt. Crum at the St. Paul Police Western District offices last week, and that they had a private conversation.

However, Thompson said he wouldn't characterize it as an apology.

"I can’t say what is in another person’s heart, but I can listen to their words. And last week Rep. Thompson made an unexpected visit to our western district offices and apologized to the sergeant who pulled him over on July 4. I don’t know why he would say it didn’t happen."

That July 4 traffic stop proved pivotal in everything that's happened to Thompson in the past three weeks. On July 6 he told the media he'd been racially profiled or stopped for "driving while Black" in St. Paul July 4.

Chief Axtell called on Thompson to apologize, and the SPPD revealed to reporters that Thompson was stopped while driving with a current Wisconsin driver's license. The department eventually released a portion of Sgt. Crum's body camera footage, a clip that begins after he had stopped Thompson.

In the video Thompson confronts Crum during the stop, accusing him of profiling him and treating him differently than he would a white driver under the same circumstances. Crum can be heard denying that, saying Thompson launched his car too quickly from a stop light and was missing a front license plate.

Just as the public was starting to absorb those facts, a Twin Cities TV station published a report that showed a series of police calls for domestic abuse between 2003 and 2010 involving Thompson and Austin.

Thompson was never tried or convicted on a domestic violence charge, but the alleged pattern of behavior led Gov. Tim Walz and other top DFL leaders to call for Thompson to resign from the House.

Rep. Thompson didn't stand for questioning during Monday's press conference, but he did tell reporters the following:

RELATED: Rep. John Thompson doesn't say whether he will resign, asks for 'a few days' to make a decision