The Sanders Campaign estimated there were “approximately 10,140” supporters in attendance. 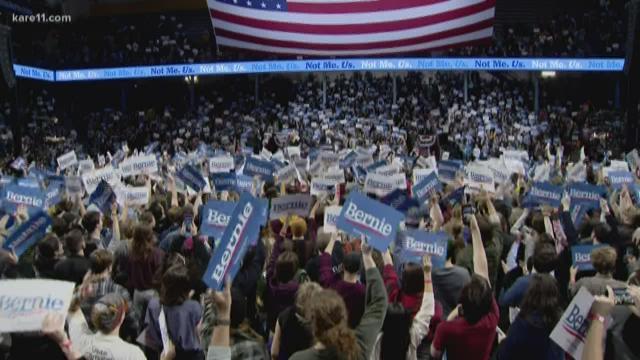 The Sanders Campaign estimated there were “approximately 10,140” supporters in attendance.

Congresswoman Ilhan Omar spoke before Sanders at the event.

Both Omar and Sanders were critical of the Trump presidency during the rally.

But while Sanders was critical of the president, he didn't say anything about the crowded group of Democrats he's currently up against.

Some Sanders supporters told KARE-11 News that they were hoping Sanders would use the rally to separate himself from Elizabeth Warren, who recently jumped ahead of Sanders in the polls.

According to numerous polls released this weekend Sanders is currently in 3rd place behind Warren and former Vice President Joe Biden.

Sanders speech largely focused on his core campaign promises of making college tuition free, and to lower the cost of prescription drugs and healthcare.

RELATED: 1 Year Out: A divided nation lurches toward 2020 election