Senate votes to limit Walz orders to one month

In new tactic, Senate passes bill that calls for Gov. Walz's emergency orders to expire after a month unless the legislature acts to extend them. 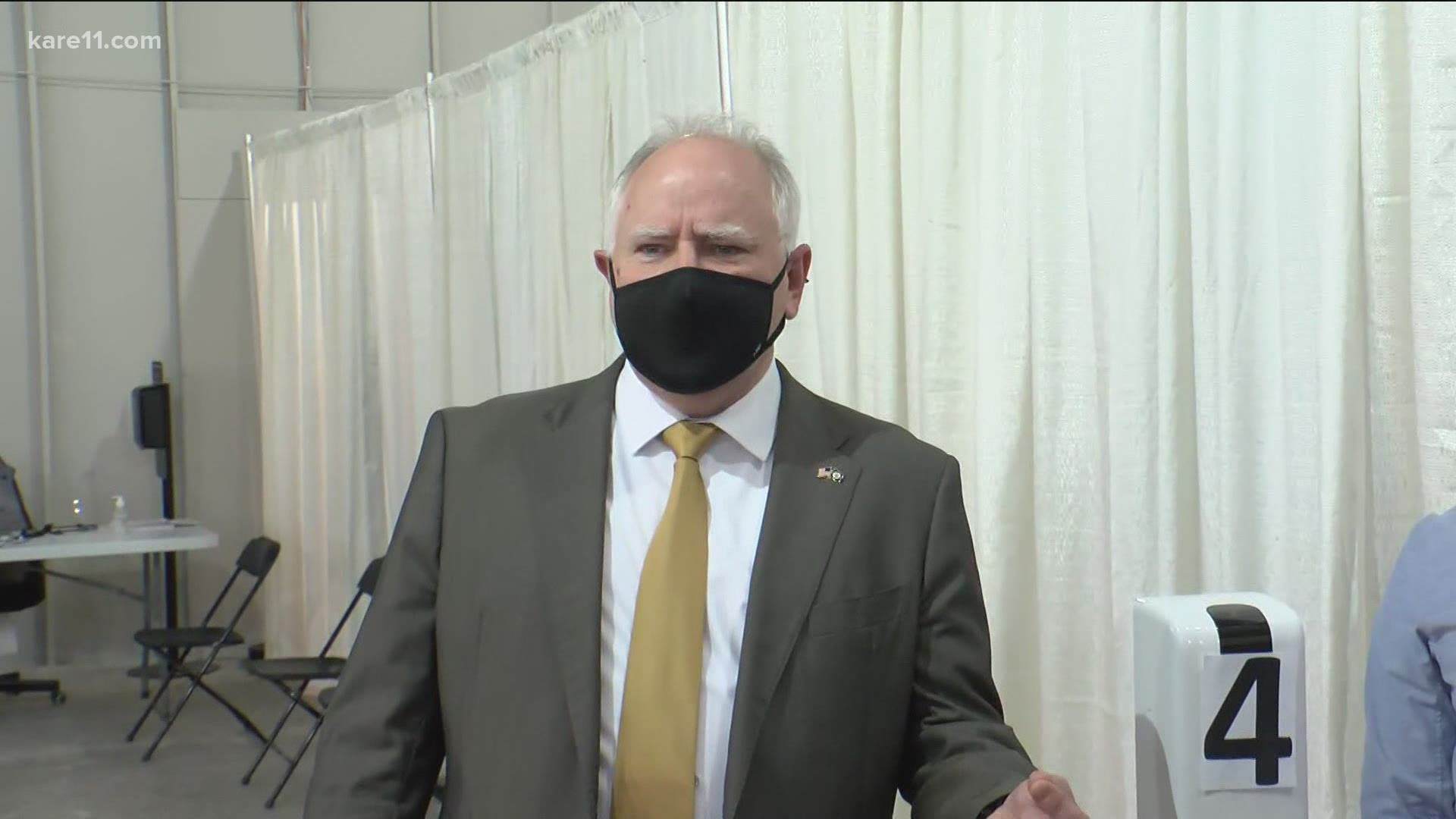 ST PAUL, Minn. — The Minnesota Senate Monday passed a bill that would cap Gov. Tim Walz's emergency orders at one month, allowing them to be extended only with the permission of the legislature.

The measure, authored by GOP Sen. Dave Osmek of Mound, drew support from all 34 Republicans, both Iron Range independents and two Democrats. Sen. Osmek said it was about creating a more open process to thoroughly vet the proposed COVID-related restrictions and debate them.

"And exercise the legislative prerogative that has been vested in each one of us, when all 67 of use pledge to honor the Constitution," Osmek remarked during the floor debate.

"We're here to fight for democracy. That's what this is about."

Minnesota Republicans lawmakers have spent much of the past 10 months criticizing Governor Tim Walz's handling of the state's response to the COVID-19 pandemic. They've also insisted he has left them out of the process of deciding which activities should be restricted for the sake of safety.

Gov. Walz had issued 121 executive orders in the past year, after declaring a peacetime emergency in March of 2020. Monday, he issued his latest order, extending the emergency until April 14.

Senate DFL Minority Leader Susan Kent of Woodbury asserted the governor can respond more quickly to changing conditions if he keeps his emergency powers, and that includes putting dedicated federal aid dollars to use immediately for coronavirus testing and vaccinations.

"The bill's author just said, 'Nothing gets done around here fast.' I couldn't agree with him more," Sen. Kent said during the Senate debate.

"And therein lies the problem. We are not built to be an expeditious body. We're not built to make quick responses, which is exactly what is called for in times of an emergency."

Walz has drawn especially intense fire from GOP lawmakers for decisions to close schools and different customer-facing businesses such as bars and restaurants. They've criticized the governor's mask mandate, and some GOP members have refused to wear masks inside the State Capitol.

Senate Republicans have voted eight times to strip the governor's emergency powers, efforts that never became law because the DFL-controlled House has defended Walz's right to hold onto those special powers.

Osmek's bill is many ways an effort to make a political statement about the governor's use of his unilateral powers. The bill's unlikely to make it to the governor's desk, given that Democrats who control the House haven't been willing to curtail fellow Democrat Walz's powers.

Walz Monday told reporters he'd be willing to relinquish his peacetime emergency orders in some areas, if lawmakers can first agree on a plan. He cited the example of passing an "off ramp" -- a transition -- that would allow him to end his moratorium on evictions.

"I've asked them to get me an off ramp. If they got their way and I ended this moratorium today, we would have a catastrophic humanitarian disaster as well as an economic disaster," Walz remarked.

"What good does it do to push someone out and evict them if there's no plan to recoup and get back?"

If Walz were to give up his emergency powers and negotiate each proposed executive order with the divided legislature, Senate Republicans would, in effect, gain the power to veto and idea proposed by the Governor of the Minnesota Department of Health.

"It would give one party control over a Governor of the opposite party in ending Emergency Powers, further politicizing what should be rare and nonpartisan responses to dire circumstances," said Sen. Matt Klein, a Mendota Democrat who has also treated COVID patients as a physician at HCMC.

"If enacted today, it would lead to renewed death and loss for Minnesotans, even as we can see the finish line at the end of this long year."

Republicans say their goal isn't to thwart public safety measures, but to make sure they're tailored more closely to different areas of the state. They've said it made no sense to treat rural areas and small towns the same as congested urban areas.

When it came to schools, Walz moved away from the one-size-fits-all model for the 2020-2021 academic year. He gave local school boards more leeway to return students to classroom learning, depending on the infection rates in their attendance area.

At one point during Monday's debate, Sen. Mary Kiffmeyer, a Big Lake Republican, appeared not to know COVID-19 is named for the year it was discovered.

And although that wasn't correct, Kiffmeyer's larger point was that one year into the pandemic the virus no longer requires an emergency response from state government. But Democrats who defend the governor's emergency powers say it's dangerous to underestimate the virus and its emerging variants.