GOP-controlled senate passes bill that would make Minneapolis financially responsible for the cost of aid from other police agencies for Chauvin trial response. 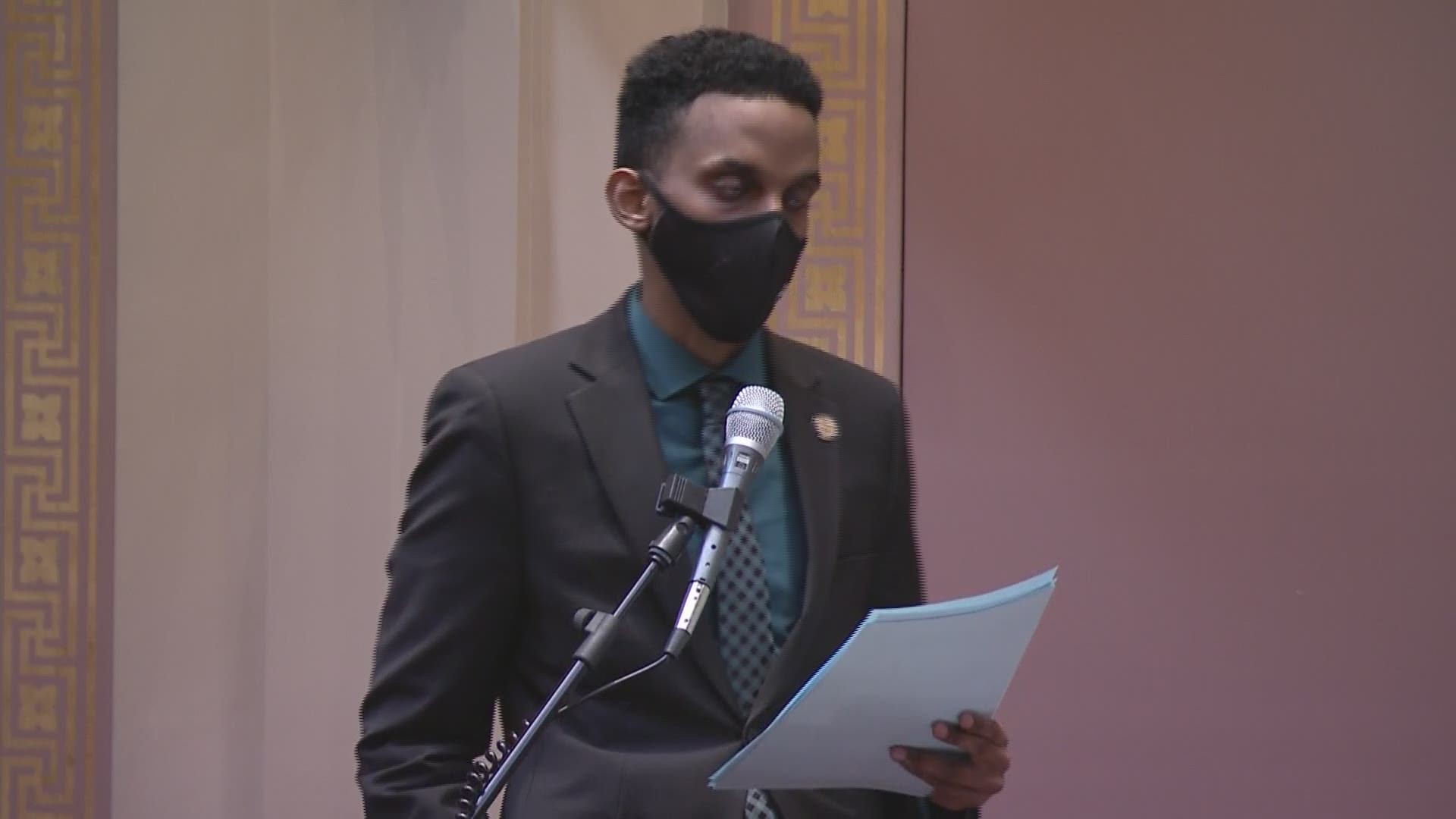 ST PAUL, Minn — The Minnesota Senate and House have competing visions when it comes to who should pick up the bill for multi-agency responses to major public safety events, an issue that has been brought into sharp focus due to the upcoming murder trial of former Minneapolis Police Officer Derek Chauvin.

Republicans Monday afternoon passed a measure that would force the City of Minneapolis to pay for the costs of bringing in other police agencies to help the city with crowd control and other efforts related to Chauvin's trial, or the response to the verdict.

The bill, authored by Sen. Bill Weber of Luverne, would deduct money from the Local Government Aid payments Minneapolis would normally receive, in order to pay for any mutual aid bills the city doesn't pay on schedule.

Typically, the city that receives law enforcement assistance through mutual aid agreements is billed by the city providing the help. In the past, Minneapolis has been able to pay those bills.

But city hasn't yet paid some of those mutual aid bills stemming from last summer's unprecedented riots, looting and protests that stemmed from the death of George Floyd in police custody Memorial Day 2020.

Ostensibly, the point of the bill is to make sure that cities that send police and firefighters to help other communities will be able to be paid for the overtime and other expenses they incur. Sen. Weber said he was inspired to introduce the bill after hearing that some police agencies no longer wanted to help Minneapolis out of concern they wouldn't be paid for it.

But during the Senate debate, several Republicans made it clear they're upset that Minneapolis City Council tried to defund police and cut back on the projected 2021 budget for police in that city. Some senators said they shouldn't have to pay for riot response in a city where the leaders aren't doing enough to discourage riots.

"People across the state are very, very frustrated with the City of Minneapolis, the leadership, that over and over and over talked about defunding the police," Sen. Paul Gazelka, the Senate Majority Leader, told colleauges.

"And worse than that, on a regular basis spoke terribly about them."

During heated debate on the measure, Democrats called this an attempt by Republicans in suburbs and Greater Minnesota to penalize Minneapolis city leaders for efforts to restructure public safety in response to Floyd's death and historic racial disparities in policing.

Today GOP-controlled Senate takes up bill to make Minneapolis pay for cost of mutual aid from other law enforcement agencies, while DFL-controlled House takes up SAFE fund, creating a pool of money to reimburse police agencies for assisting police in other cities pic.twitter.com/zYZEieUp8G

Democrats pointed out that significant numbers of those arrested for breaking into businesses and setting them afire were from suburbs and Greater Minnesota. They also said such a bill would set a poor precedent that would, in essence, allow cities to garnish the Local Government Aid payments that fellow cities are scheduled to receive.

"We have to acknowledge the dialogue about these issues has gone on and on and on, and put us into this unhealthy discussion about us versus them," Sen. Susan Kent, the DFL Senate Minority Leader, remarked.

"This 'what's mine is mine and what's yours is I don't care about'."

Weber's bill passed on a party line vote, with all 34 Republicans voting yes, and all 31 Democrats voting no. The two Iron Range independent Democrats split, with Sen. Tom Bakk voting against it and Sen. David Tomassoni voting in favor.

The DFL-controlled House Monday had been expected to take up legislation to create a special $35 million account, known as the SAFE Fund. In this case, SAFE is an acronym for State Aid for Emergencies and is also designed for situations involving mutual aid situations.

But before debate began on the SAFE bill, the House voted to lay it on the table, essentially postponing action indefinitely.  House Majority Leader Ryan Winkler told colleagues he had hoped to negotiate a compromise on mutual aid with GOP Senate leaders.

He said, however, the Senate's passage of Weber's LGA bill made it clear to him that "it's impossible to have a reasonable conversation" with the GOP majority in that body.

As described by Gov. Walz, the SAFE account would be used to reimburse cities that provide police and firefighters for major emergencies if the host cities are having trouble paying for that aid. It's anticipated most cities that enter into mutual aid agreements will be able to pay for the outside help they receive, but the SAFE account bill anticipates situations that would overwhelm the finances of a city or town or county.

The bill wouldn't been expected to face an uphill battle in the GOP-controlled Senate because Republicans have been characterized the fund as "bailing out Minneapolis leaders" for decisions they've made to revamp law enforcement.

Teddy Tschann, a spokesperson for Gov. Tim Walz had this reaction to the SAFE Fund hitting a roadblock Monday:

"The State of Minnesota has been working with local law enforcement for months to prepare for the enormous public safety challenges associated with the trial of Derek Chauvin," Tschann told KARE.

"The State will adjust plans accordingly if the Legislature doesn’t pass this funding, but the Governor is extremely disappointed that Paul Gazelka and Senate Republicans voted to defund the police. This decision will make it more difficult to protect people, property, First Amendment rights, and the National Guard."

MN House postpones debate on SAFE Fund, a $35 million account to help cities pay for mutual aid in large, multiagency public safety responses. DFL Leader Ryan Winkler made the motion, saying "it's impossible to have a reasonable conversation" with Senate GOP majority on this pic.twitter.com/H71s4Nv8wX

"Governor Walz doesn't get to re-write history. It is laughable to suggest our bill defunds police. Senate Republicans passed a bill that will fund emergency police needs, with Republican and Independent caucus member support."

For the record, the Minneapolis City Council never did "defund police" as promised during a rally days after Floyd's death. The department's authorized force remains at 888 sworn officers, well above the 730-officer minimum in the city's charter.

But 24 officers took early retirement in January and 150 officers are on leave, some in response to post traumatic stress from the rioting that destroyed hundreds of businesses in the city, according to an attorney who is representing them in workers compensation claims.

The City Council voted Feb. 12 to release an additional $6.4 million at the urgent request of Chief Medaria Arradando, so he can get recruiting classes ready to take to the streets.