The inquiry came in a letter from the lawmakers to the Minnesota Historical Society. 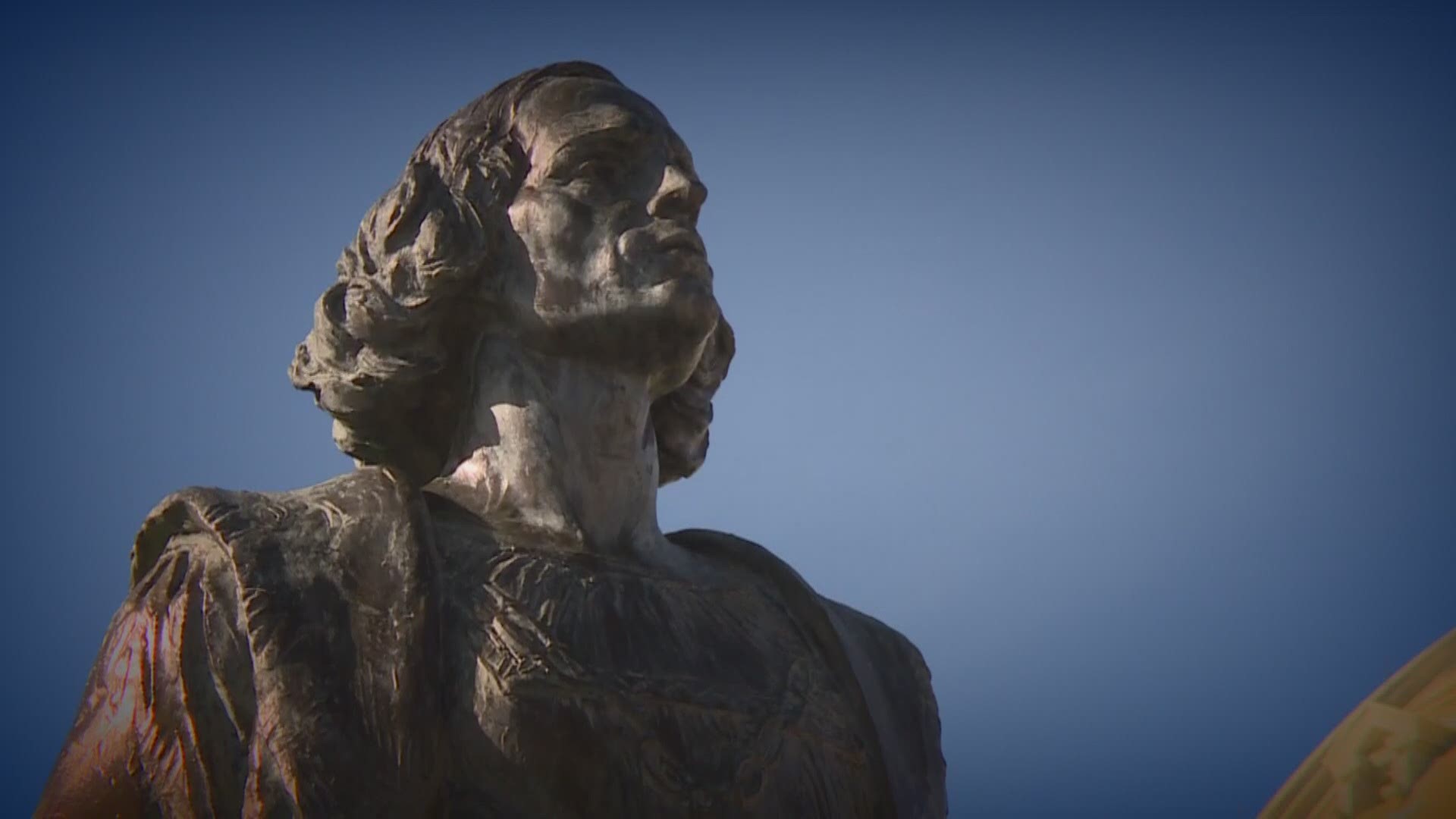 ST PAUL, Minn. — Two leading Minnesota Senate Republicans are asking the Minnesota Historical Society (MNHS) when a statue of Christopher Columbus will be restored in front of the state capitol building in St. Paul.

A group pulled down the statue on June 10, after protesting the memorial and the history of Columbus' treatment of Native Americans.

Following the statue's toppling, Lt. Gov. Peggy Flanagan, the highest ranking Native American elected executive in the country, said she wished the statue's removal had gone differently but was "not sad that it’s gone."

This week, Republican Senators Carla Nelson of Rochester and Bill Ingebrigtsen of Alexandria sent a letter to the Minnesota Historical Society, asking the agency to clarify when the statue will be returned, or whether other state action is needed first.

In the letter, the senators noted that Minnesota law requires approval by MNHS before any "monument, memorial or work of art shall be relocated or removed from, or placed in (the Capitol or the Capitol grounds)." The senators said MNHS had not yet given that approval.

But the pertinent statute they quoted in the letter doesn't include the words "in the Capitol or Capitol grounds." The senators replaced the word "such areas" with their interpretation of what such areas means.

The Historical Society doesn't share that view.  MNHS officials have contended that "such areas" refers only to monuments and statues located indoors at the Capitol. They believe the CAAP Board, or the Capitol Area Architectural Planning Board, must have final say on any monuments in the outdoor areas.

Sen. Nelson serves on the CAAP Board, but it is chaired by Lt. Gov. Peggy Flanagan. As a member of the White Earth Ojibwe Nation, Flanagan views Columbus as a destructive figure who ushered in genocide and subjugation of the indigenous people in this hemisphere.

As such, she rejects the Eurocentric view of Columbus as the "discoverer of America," which is the line etched in stone on the pedestal to the statue. 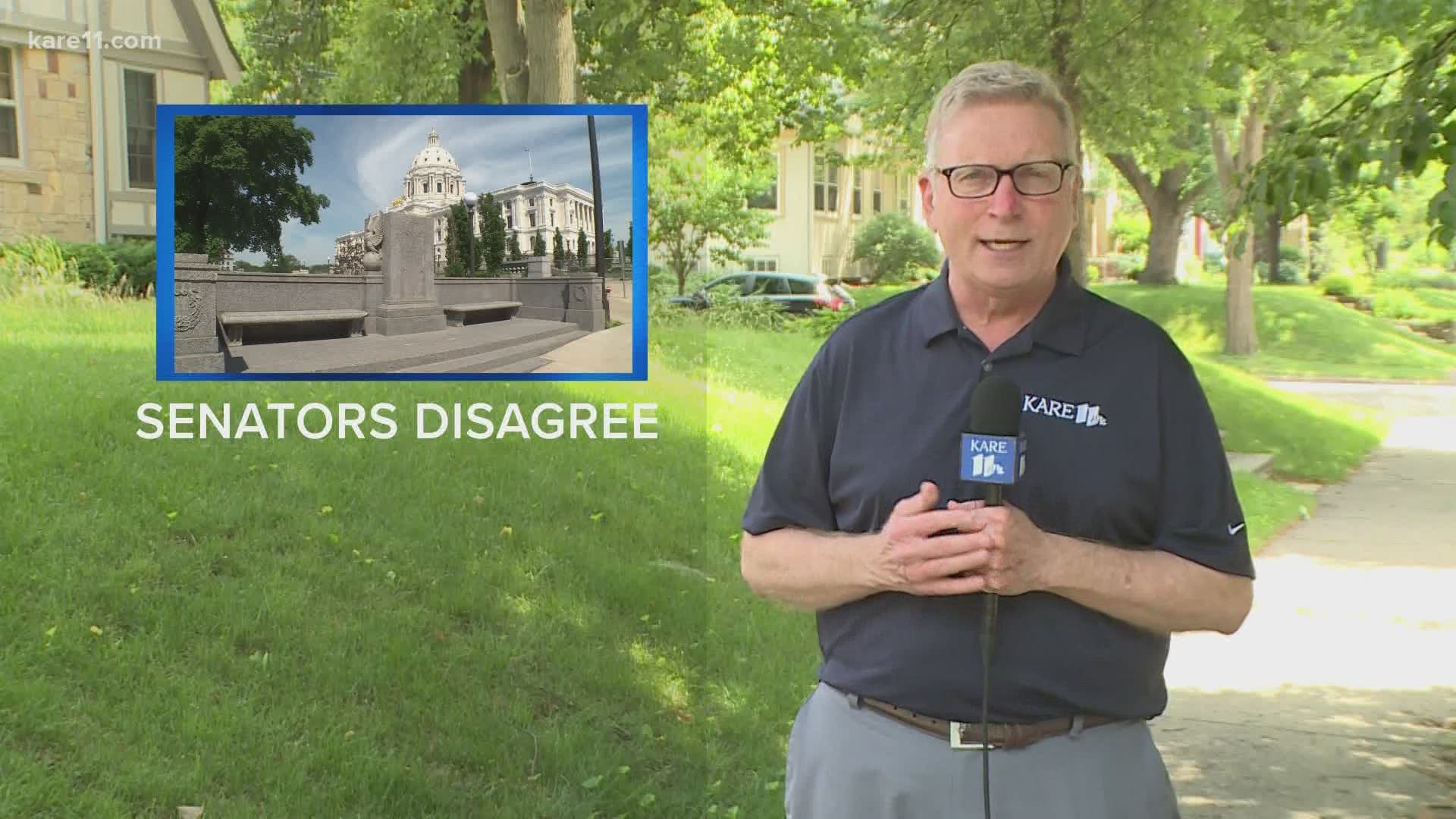 After the statue was toppled the CAAP Board began to work on a formal process allowing citizens to weigh in on Capitol artworks and object to them. Flanagan said the lack of such a process is one reason opponents of the 1931 statute resorted to tearing it down without permission.

"Minnesota has clear procedures they and everyone in this state need to abide by, whether you’re on the right or the left," Sen. Ingebrigtsen said in a statement. "Expectations can’t be made on a case by case basis, and we can’t allow favoritism in this state. Today, we’re seeking clarification on when the rules are going to be restored."

"One does not get a pass on tearing down a statue because they do not like it," Sen. Nelson said. "It is against the law, and in this case, it is a felony punishable by a $10,000 fine or five years in prison. We can’t erase history by tearing down statutes, but we can reinterpret it – we should talk about what we believed then and what we believe now and how our thinking has changed."

In their letter, the senators also noted that the MNHS-run MNopedia website now references the statue's toppling in its entry on the Columbus memorial, stating on the website, "if the CAAPB (Capitol Architectural Area Planning Board) decides not to remount the statue on the capitol grounds, then the Minnesota Historical Society will supervise its disposition, as directed by state statute."

The MNopedia entry says the statue remains intact after it was pulled down.