The dispute over the cost of Trump's rally at the Target Center smoldered Tuesday following a Twitter spat between the President and Minneapolis Mayor Jacob Frey. 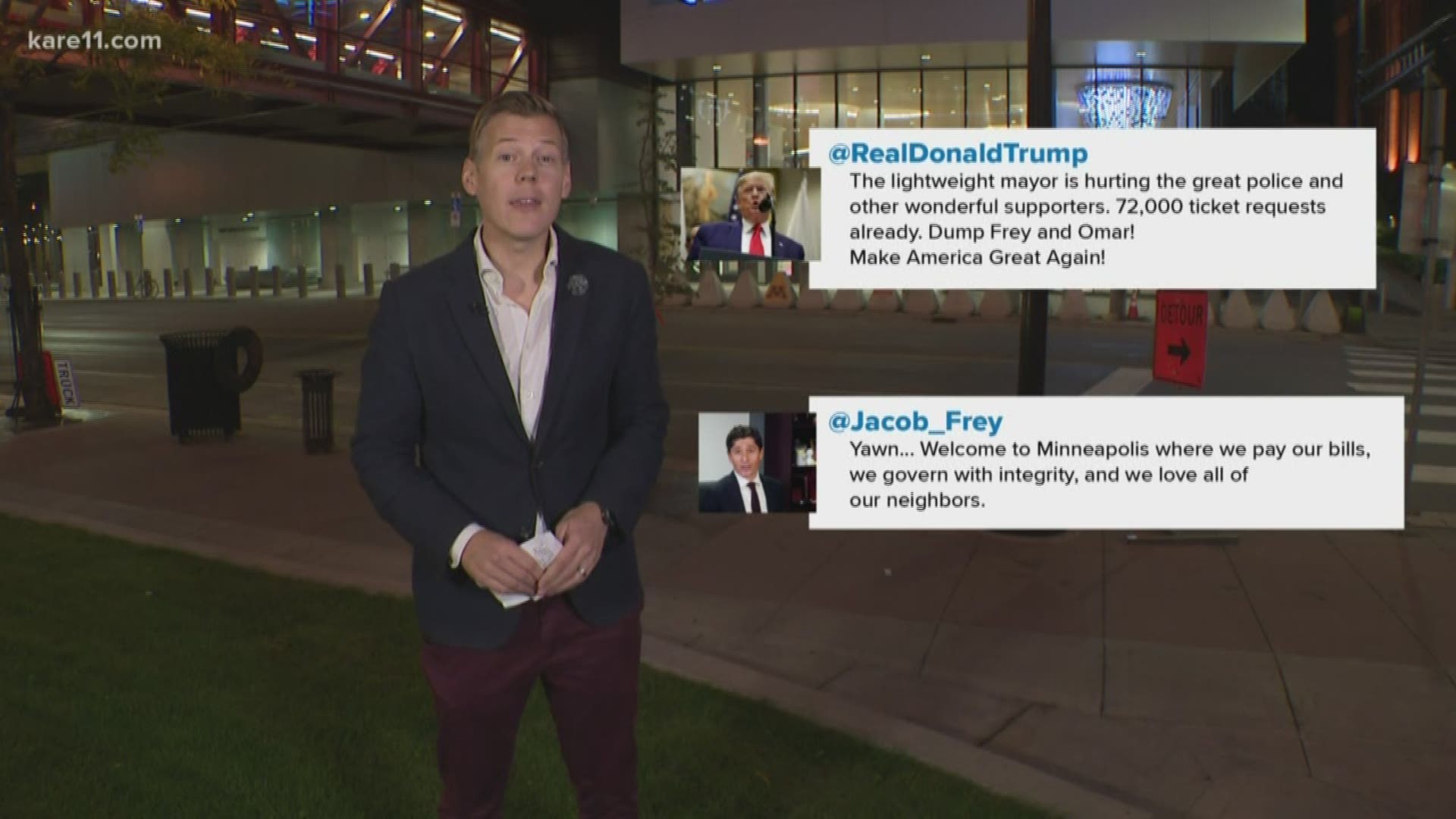 MINNEAPOLIS — President Donald Trump's campaign says a rally in Minneapolis will go ahead as planned Thursday after earlier threatening a lawsuit over the city's effort to recover $530,000 in security costs.

The flap over the cost of Trump's rally at the Target Center smoldered all day following a Twitter spat between the President and Minneapolis Mayor Jacob Frey. Frey fired back at President Trump Tuesday morning after a tweet calling him a "lightweight."

The social media battle came in the wake of a letter from the campaign, sent Monday, alleging that Trump's organization was asked to pay around $530,000 to cover security and other costs related to the event. If the payment wasn't made, the campaign alleged, the Target Center would withhold use of the facility.

The campaign called the alleged bill "an outrageous abuse of power by a liberal mayor trying to deny the rights of his own city’s residents just because he hates the President," and that U.S. Secret Service handles all security and other costs.

"Frey’s city government preemptively informed the Target Center that it would be responsible for $530,000 in security and other costs related to the event," reads the press release from the Trump-Pence Campaign. "The Target Center attempted to pass the costs on to the Trump campaign under threat of withholding the use of the arena."

Later Tuesday the Trump campaign said in a statement that operators of Target Center had backed off cancelling the contract, with no agreement by the campaign to pay additional money.

Tuesday morning the President retweeted his campaign manager, who posted "The radical Mayor of Minneapolis, @Jacob_Frey, is abusing his power in an attempt to block the President's supporters from seeing him speak on Thursday."

Mayor Frey quickly responded, calling Trump's integrity and the alleged problems with his campaign covering its bills into question.

That exchange was quickly followed by another, with President Trump telling "the Radical Left Mayor of Minneapolis that he can’t price out Free Speech," and Frey retorting that "Someone tell the President of the United States that he can afford to help pay for the extra time our officers will be putting in while he’s in town."

At this point the Target Center has not responded to requests for comment on the allegations made by the Trump Campaign that it is being forced to pay up front.

Minneapolis Police Chief Medaria Arradondo issued a statement Tuesday on security surrounding the event, saying, "When our Nation’s President arrives in our city this Thursday, the men and women of the Minneapolis Police Department along with our local, county, state and federal law enforcement partners will be focused on our primary responsibility to ensure the public safety of ALL who will participate in practicing their first amendment rights which include Freedom of Speech, Freedom of the Press, and Peaceable Assembly."

Arradondo urged people not to bring backpacks, strollers, coolers, firearms, or a handful of other items.

The Trump-Pence campaign has been plagued by reports of unpaid bills for past rallies. An investigation by The Center for Public Integrity says at least 10 city governments - from Lebanon Hills, Ohio to Mesa, Arizona - say the campaign owes them hundreds of thousands of dollars. The center says some of those invoices are three years old. In all, city governments say Trump’s campaign owes them at least $841,219.

Center for Public Integrity Editor Dave Levinthal says the Trump-Pence campaign was contacted for comment on the subject of unpaid bills, but did not respond.

City of Duluth Public Information Officer Kate Van Daele tells KARE 11 the city racked up $69,000 in security costs from Trump 2018 rally, and $31,000 from a separate Pence rally the same year.

Van Daele says Duluth hasn’t sent the Trump campaign invoices because the city was told the campaign “wouldn’t entertain the notion of reimbursement” for those costs. She adds the caveat that Democratic campaigns generally didn’t pay to reimburse the city either, but said some of those Democratic events were official presidential visits, and not campaign stops.

"Last night, Mayor Frey took yet another step to stifle the voices of Minnesota Republicans looking to show their support for our President. This move highlights the fact that liberal Democrats cannot handle the outpouring of support for President Trump, his successes in office, and his message of making America great again, and their only course of action is to silence the opposition. It was bad enough for Frey to say the President of the United States is not welcome in his city, but it is simply outrageous that Democrats are now choosing to trample on the First Amendment rights of Minnesotans. This abuse of power would set a dangerous precedent in what is supposed to be the freest country in the world."

Mayor Frey issued a statement about the matter:

“My position with respect to the operating costs remains unchanged: in keeping with our contract with AEG, taxpayers should be reimbursed for city-incurred costs resulting from the president’s visit. In the days ahead, I will be meeting with city leadership and my council colleagues to decide upon the appropriate path forward.”

Trump has a long history of being accused of not paying his bills. A 2016 investigation by USA Today found hundreds of liens against Trump companies by contractors who said they weren’t paid, along with dozens of lawsuits seeking unpaid bills. In March, Trump’s former personal lawyer, Michael Cohen, sued the president for millions of dollars in unpaid legal fees. And Trump himself has boasted about the tactics he uses to get out of paying what he owes, including describing himself to CBS News anchor Norah O’Donnell as “the king of debt.”

Those debts are particularly pronounced in Washington, D.C., where Trump owes an estimated $9 million in unpaid fees between his 2017 presidential inauguration and the Salute to America Fourth of July festivities this summer.

Mayor Muriel Bowser has said Trump’s unpaid bills are a prime contributor to the city’s emergency fund being $6 million in the hole.

In July, Bowser sent Trump a letter asking him to pay his bills.

“As we continue to gather estimates for the next Inauguration, we ask for your help with ensuring the residents of the District of Columbia are not asked to cover millions of dollars of federal expenses and are able to maintain our high standards of protection for federal events,” Bowser wrote.

A spokesman for the Mayor’s Office said Tuesday the city has still not received any payment on the outstanding debt or any response to the mayor’s July letter.