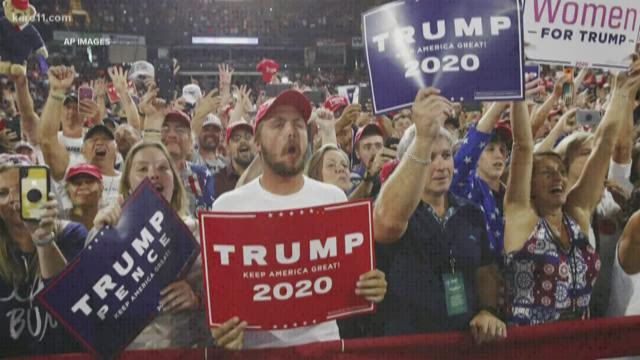 MINNEAPOLIS — President Trump clearly sees Minnesota as a state that can be flipped from blue to red in 2020, so it Thursday's Target Center rally may be the first of many he holds here in his quest for a second term.

In 2016, he came closer to winning Minnesota than any Republican in decades, losing to Hillary Clinton by just one and a half percentage points.

"So the gap has narrowed, and he thinks he has a shot at winning Minnesota in 2020, so the earlier he can rally his base and get people enthusiastic, he believes the better off he will be going into 2020," Kathryn Pearson, a University of Minnesota political science professor, told KARE.

The president and Vice President Mike Pence will both be in Minnesota Thursday, looking to make inroads into the swing suburbs that went to Democratic candidates in the 2018 midterm elections. Suburban women played a huge role in the gender gap that year.

Pearson said most of the people who will go to the rally will be very dedicated to the president's cause, especially considering how long the wait times and security screening goes. Those supporters don't need to be convinced, but they can energize others.

"I don't think a presidential campaign rally is winning over any voters, but what it is doing -- which will have an impact on 2020 -- is energizing the base of people who already support President Trump to go out and talk to their neighbors or perhaps volunteer or donate or become more involved in his campaign."

She said it's a safe bet the president will sling some barbs at Rep. Ilhan Omar, who represents the Minneapolis area in Congress, because they've sparred so much rhetorically in the past.

And he gained a new Minnesota target in Minneapolis Mayor Jacob Frey, after he said the president wasn't welcome because his values are out of sync with the residents of this city.

Frey later encouraged demonstrators to be peaceful and respectful to the city's visitors who are coming to town for the rally.

But the mayor further enraged the GOP faithful with his decision to enforce the rule that off-duty police officers can't appear in uniform at partisan political rallies.  He then became got into a Twitter spat with the President, after insisting the Trump campaign pay $530,000 to reimburse the city for it's anticipated public safety costs.

The campaign will pay for the use of the Target Center, which is managed by the AEG entertainment brokerage. But the campaign won't reimburse the city for police overtime and other expenses.