US Senate Race: Smith vs Lewis

Incumbent Democrat Tina Smith runs for a full six-year term in the US Senate after winning a two-year stint in a 2018 special election. 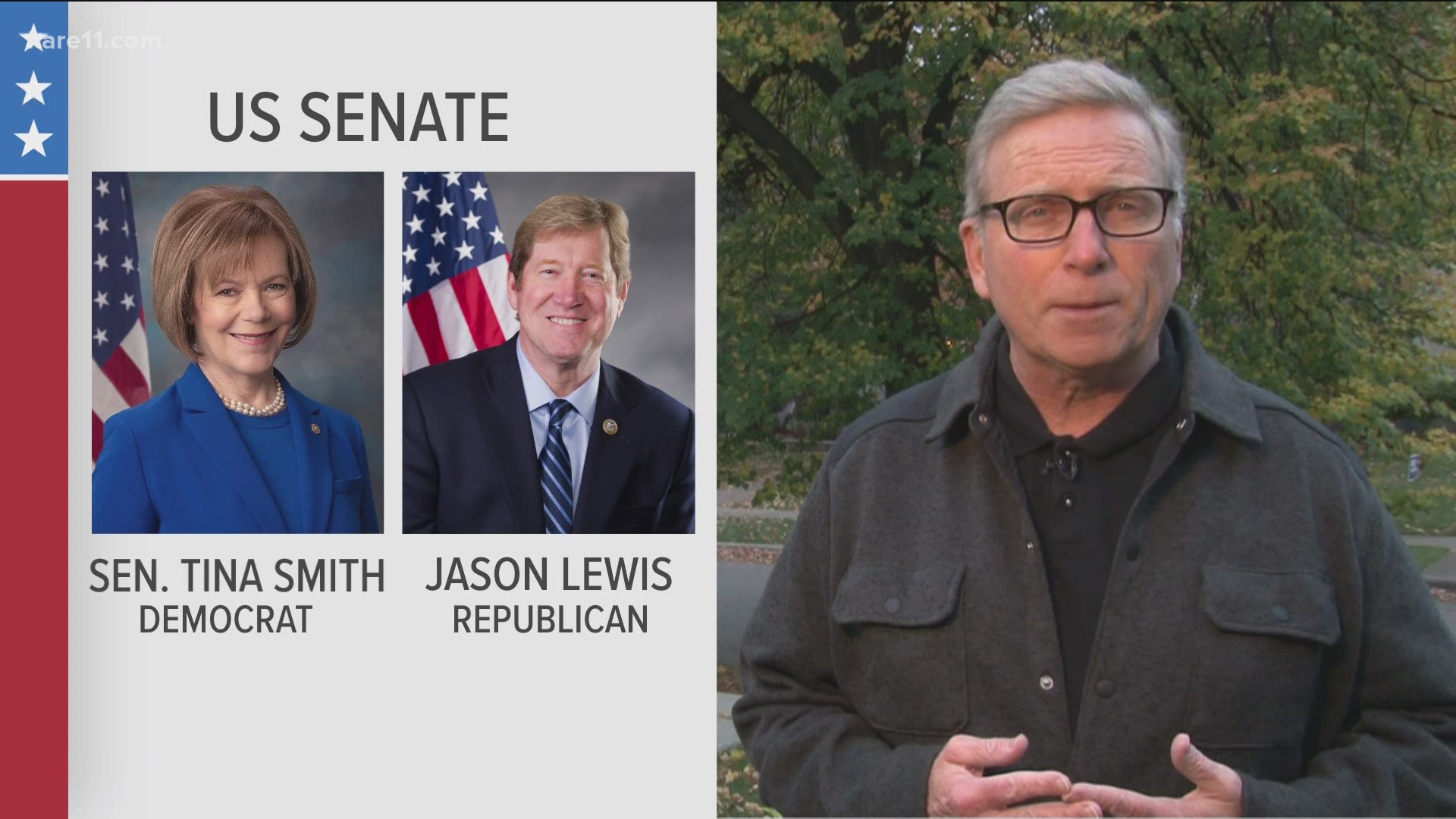 Democrat Smith is running for a full six-year term in 2020, after winning a special election in 2018 for the remaining two years of former Sen. Al Franken's term.

"I think that voters are looking at this public health and economic crisis brought on by COVID," Smith told KARE. "They're looking for leaders who are about moving us forward that are trying to figure out how to build back better."

Lewis was a long-time conservative radio talk show host nicknamed Mr. Right. He won a trip to Congress in 2016 in Minnesota's Second District but was unseated in 2018 by Democrat Angie Craig.

He's running as an unabashed supporter of President Donald Trump.

"I think we have a radicalized Democrat party that is not the DFL Party of Hubert Humphrey or Wendy Anderson," Lewis told KARE. "At some point you look at your civil liberties, you look at the future of the country and you say there's an awful lot at stake here."

Smith worked in business and non-profits before entering politics as chief of staff for Minneapolis Mayor R.T. Rybak. She served in the same role for Gov. Mark Dayton and was elected lieutenant governor we he won a second term in 2014.

When Franken resigned from the US Senate amid an inappropriate behavior scandal in 2017, Gov. Dayton appointed Smith to the US Senate to fill that vacancy.  She defeated state Sen. Karin Housley in the 2018 special election and is now vying to serve a full six-year stint.

In the Senate, Smith co-sponsored bills to bring down the cost of prescription drugs, but the COVID pandemic has now taken center stage.

"I'm thinking about the moms I've talked to that are trying to figure out how to do distance learning for their children, while they're also doing their jobs. And they are exhausted; they want to know that somebody is there to help them."

Former Rep. Lewis believes many states, including Minnesota, have overreacted to the pandemic and locked things down too tightly. He says he believes businesses and schools can safely reopen if steps are taken to protect those who are most vulnerable to severe symptoms.

"When the president returned from Walter Reed and said, 'Do not be afraid' -- that is precisely the right message," Lewis remarked.

"Go about your business. Take prudent steps. But we cannot cower in place; that's not America!"

The aftermath of George Floyd's death changed the focus of the election for Lewis. He's held multiple "Back the Blue" events to support for police. He's also invited the media to join him as he meets with small business owners who lost their stores to arsonists during those turbulent times in late May.

"I've visited 20 to 25 businesses in Minneapolis and Saint Paul, most of them owned by people of color. Not one person said we need fewer police!"

While police departments are funded primarily at the local level, Lewis and other Republicans have seized on the words of Minneapolis City Council members who in early June called for dismantling and defunding the Minneapolis Police Department.

That effort was thwarted when the city's charter commissioner refused to put the police the issue on the city ballot for November. The city's Democrat mayor also opposes the idea of defunding the police. But Republicans have made law and order, the riots and the specter of defunding a key part of their campaign messaging.

Smith said Republicans are losing sight of what sparked the civil unrest in the Twin Cities, the death of Floyd who was restrained for more than eight minutes by officers in an episode captured on a bystander's phone camera.

"The killing of George Floyd has laid bare the deep inequities in our policing and our criminal justice system, and you can see this in the tragedy of his murder, but you can also see it in the numbers, which show Black and brown people in Minneapolis many times more likely to be stopped for an offense and to be the victims of police excessive force."

Smith said during her time in Mayor Rybak's office she worked closely with the MPD, and knows that department's ranks include many fine, dedicated officers. But she also backs legislation that would hold officers accountable for using excessive force and violating civil rights of those being arrested.

Both Lewis and Smith support banning chokeholds and starting a national registry to track problem officers, but Lewis believes officers should keep qualified immunity from lawsuits.

Smith, on the other hand, says officers should be legally liable in cases where they are found to violate someone's civil rights. She also favors restricting the use of no-knock search warrants that have led to collateral victims such as Breonna Taylor.

They two candidates are split on the proposed Twin Metals copper-nickel mine near Ely in the BWCA watershed. Lewis believes sulfide mining can be done safely.

"The copper-nickel reserves, platinum, cobalt, titanium on the Range right now are either one, two or three of the largest reserves perhaps in the world," Lewis said. "It would be a renaissance for that part of a state, and for the Twin Ports in Duluth and Superior."

But Smith wants to know what was in the environmental study ordered by the Obama Administration but cut short by the Trump Administration. She said only a heavily redacted version has been made available.

The Smith-Lewis matchup has national consequences with control of the US Senate in the balance, and the possibility of a new president taking office in 2021.