Vice President Mike Pence will be in the Granite State on Tuesday for a campaign event at the Laconia Municipal Airport in Gilford. 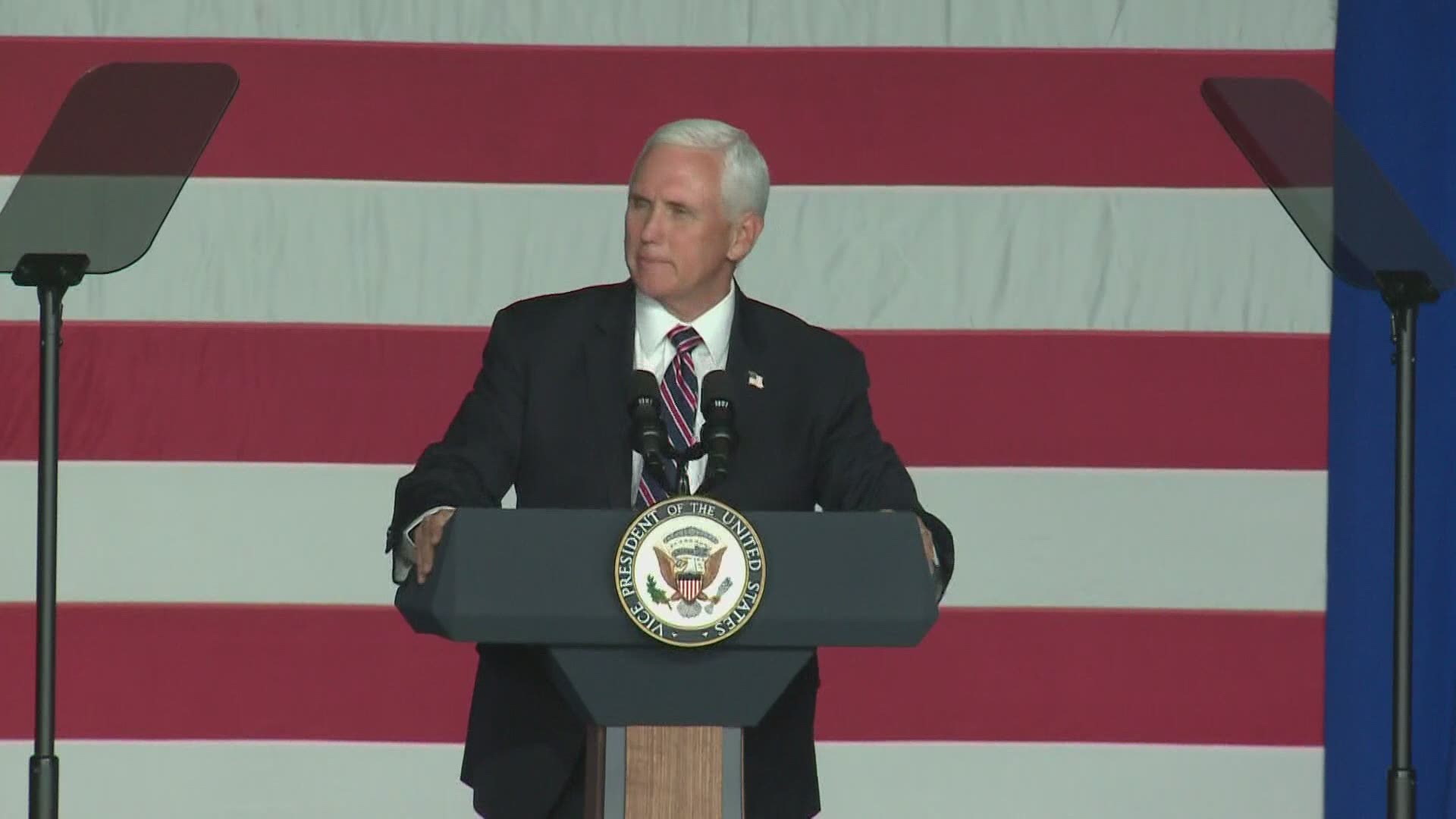 GILFORD, N.H. — The campaign trail continues in New England this week, as Vice President Mike Pence makes a trip to the Granite State.

The "Make America Great Again" event is planned for 3 p.m. at the AutoServ Hangar in Gilford. Doors opened at 1 p.m.

All attendees were temperature checked and required to wear masks at the event. Per New Hampshire Executive Order, masks are required for gatherings of more than 100 people.

More than 200 people have already gathered at the Laconia Municipal Airport in Gilford, NH ahead of VP Mike Pence’s visit. All of the attendees were temperature checked and are required to wearing masks. @newscentermaine pic.twitter.com/WozMgGExwP

The event got underway just before 3 p.m. with former N.H. Senator and Attorney General Kelly Ayotte taking the stage first.

“What I’m asking of you is to get out and tell your family members and your friends what is at stake in this election.” Former New Hampshire Senator and Attorney General Kelly Ayotte addresses the crowd ahead of Mike Pence. @newscentermaine pic.twitter.com/AQWIUiLkbX

The Trump campaign also has been campaigning in Maine. Last week, President Donald Trump's son Eric Trump made a stop in Saco, and this week his oldest son, Don Jr., will head to Holden for an event on Wednesday.

Eric Trump's event in Saco on Thursday drew about 200 supporters to the Camp Ellis pier.

We love you MAINE!!! #KeepAmericaGreat pic.twitter.com/YS8A7ySKIk

A few weeks ago, Trump held a rally in Londonderry, N.H., but so far no events with President Trump himself are planned for Maine.

Trump's Democratic challenger former Vice President Joe Biden is also deploying his campaign to New England. Biden's wife Dr. Jill Biden will be in Maine for a campaign event on Friday, though details of that event have not yet been released.

In response to Pence's visit on Tuesday, N.H. Democratic Party Chair Ray Buckley issued a statement saying to "not expect remorse for any decision leading to today’s grim reality that 200,000 Americans have died in this pandemic and tens of thousands of Granite Staters have lost their jobs and businesses in the fallout."

"After all, the Trump-Pence Administration knew just how bad this would be, but tried to limit bad press instead of coming up with a national strategy that would have saved countless lives," Buckley continued. "Pence also won’t talk about the rest of their reckless agenda, like trying to take away coverage protections for pre-existing conditions and slashing Medicare and Medicaid -- all with a seal of approval from their New Hampshire Republican allies. Four years of a Trump-Pence administration is far too much. Granite Staters are ready for new leadership, represented by Joe Biden and Democrats up and down the ballot.”

NEWS CENTER Maine is covering the Pence event. Stay tuned for complete coverage. This story will be updated.