Violence Against Women Act bogged down

Native American women call on the U.S. Senate to renew the federal domestic violence law that expired in 2018 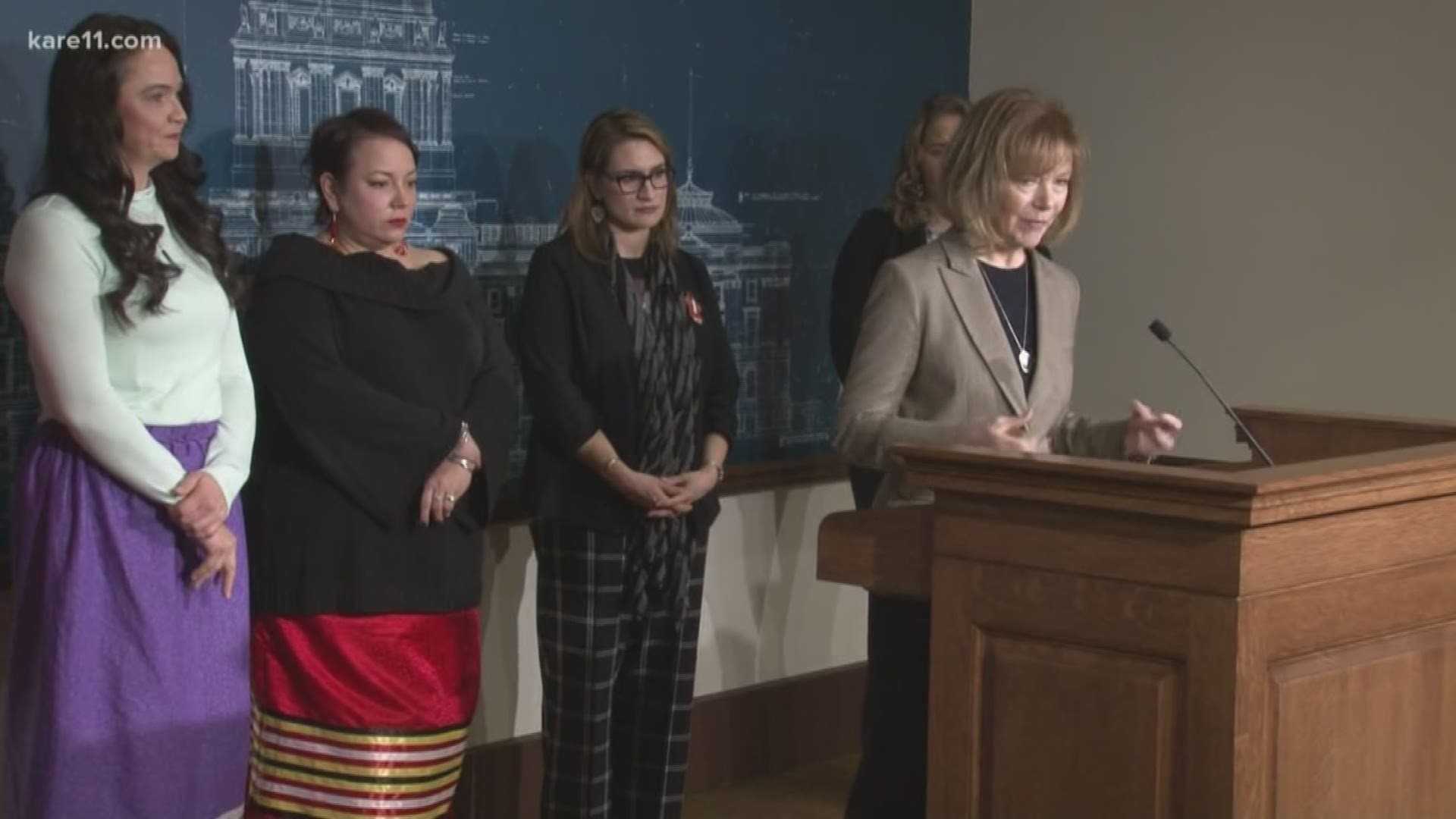 ST PAUL, Minn. — Native American victim advocates are calling on the US Senate to pass the reauthorization of the Violence Against Women Act, which expired late last year. They joined Sen. Tina Smith and Lt. Gov. Peggy Flanagan at the State Capitol Friday to make their case.

"It’s hard for me to understand how it’s political, or how it’s questionable, when we live in an environment where I don’t know anyone who hasn’t experienced violence, either themselves or their immediate family, including myself," Patina Park, the president of the Minnesota Indian Women's Resource Center, told reporters.

The law was originally passed in 1994 and reauthorized in 2013. The U.S. House passed a reauthorization bill in April, but it has been bogged down in the U.S. Senate due to Republican senators' objections to some of the new features.

"That bill sits on the doorstep of the United States Senate with no action taken because Majority Leader Mitch McConnell refuses to bring it forward," Sen. Smith, a Minnesota Democrat, remarked.

"I'm startled and disappointed that we can't move on this."

The Violence Against Women Act allowed for stepped up prosecution of domestic violence, sexual assault, stalking and dating violence. It also provided funding to community-based groups that work with victims and for prevention efforts.

The U.S. House version of the reauthorization bill would, among other things, empower tribal courts to prosecutor non-native people for sexual assaults and other acts if violence that happen on tribal lands.

"Offenders often go unprosecuted or unpunished because tribal governments do not have the authority to punish crimes of sexual violence committed by non-native people on tribal land," Smith explained.

Smith introduced bills to mirror the tribal provisions in the one that passed the House, including the Native Survivors of Sexual Violence Act and the Native Youth and Tribal Officer Protection Act.

"It’s time that we give that power back to us, so that we can respond to our people to ensure that our needs are met, and justice is served in an indigenous, traditional way."

This week Sen. Amy Klobuchar and several Democratic colleagues introduced a bill to reauthorize the Violence Against Women Act. It included language designed to close the "boyfriend loophole" barring abusive dating partners from buying or owning a gun.

Republican opposition to reauthorization appears to center on a provision that would broaden the category of crimes that would bar people from owning firearms. The House version would extend the gun ban to people convicted of misdemeanor stalking, whereas the existing law applied only to felony-level convictions.

Iowa Republican Joni Ernst said she'll introduce her own version, one that can gain the support of the GOP majority in the Senate.

Concern over rising violence against Native American women prompted Minnesota lawmakers to take action during the 2019 session. They passed a bill that created, and fully funded, a statewide Task Force on Murdered and Missing Indigenous Women.

One of the goals is to create better data collection, to get a better handle on the depth of the issue and the situations that put women in danger of being harmed.

"When we don’t have accurate data on the rates of native women who are missing, who have been murdered, we can’t move forward in creating effective strategies that reduce that violence," Lt. Gov. Peggy Flanagan, a member of the White Earth Nation, told reporters.

"We measure what we care about, and we invest in what we measure."

Statistics for the past three decades, compiled by the advocacy group Violence Free Minnesota, show that Native American women account for six percent of domestic violence even though they're only one percent of the state's population.

"Domestic violence is a leading cause of homelessness for women and their children," Katie Kramer of Violence Free Minnesota said, noting that many victims lacked the resources to move away from dangerous situations.

Patina Park hit on that point as well.

"What we need is housing. We need resources to stabilize, to give us the opportunity to move outside of dangerous environments."