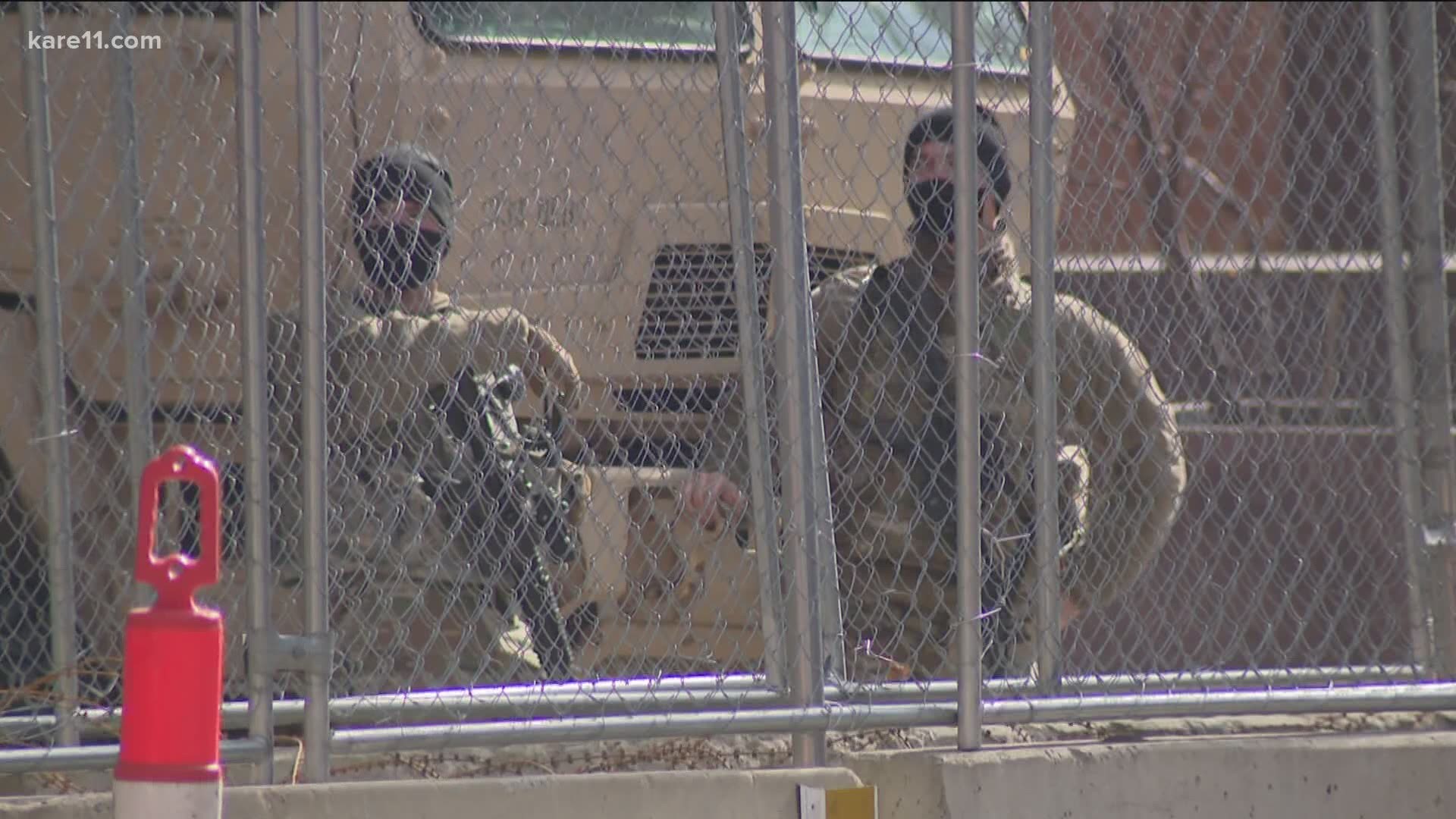 ST PAUL, Minn — "Unacceptable." That's the word governor Walz used to describe what happened to a group of Minnesota National Guard members this week in the Capital City.

Roughly 50 soldiers and airmen set up shop in the Saint Paul Labor Center Tuesday, but then were told to leave by a group of protesters who were identified by one labor activist as rank and file members of unions.

The union hall is owned by several different unions. One source told KARE that one union invited the Guard members to stay in the hall while they staged for their next operation, but some of the other unions that control the building weren't comfortable with an armed military presence at the facility.

In a Facebook video posted by labor activist Cliff Willmeng, the armed guardsmen can be seen packing up their gear and heading to their military Humvees and other armored vehicles in the parking lot. The video showed that St. Paul police officers were at the door, and several protesters were chanting and recording the action with their smart phone cameras.

"Go home! Never come back!" one as the demonstrators shouted, as others chanted, "What kind of power? Union power!"

One held a sign that read, "Solidary with Black People. @RFL. Not military repression." RLF is a reference the St. Paul Regional Labor Federation.

Protesters stood next the military vehicles as they departed, some singing the 1969 Steam song "Na Na Hey Hey Kiss Him Goodbye" which has become a ballpark anthem to send off someone taken out of a game.

Bill McCarthy, the president of the Minnesota AFL-CIO, said he was disappointed to learn about how the guard members were treated at the labor hall.

"I want you to know that as a veteran, I want the public and the Guard to know, I support the National Guard. I support the military," McCarthy told KARE.

McCarthy, who served in Vietnam in the US Army, said he understands that some people are upset by the presence of an armed military force on the ground in their neighborhoods.  And he acknowledged that different unions are opposite sides of the controversy over their deployment.

"Some of our union brothers and sisters who are immigrants have a different experience with the military, so they see it as an oppressive force," McCarthy explained.

The Minnesota National Guard issued a statement to KARE on Friday saying the Guard wouldn't make a statement about what took place at the St. Paul Labor Center.

But Gov. Tim Walz, who spent 24 years in a National Guard unit based in New Ulm, Minnesota, strongly condemned how the group of protesters treated the airmen and soldiers.

"Let’s be clear: The brave men and women of the Minnesota National Guard are our neighbors. They’re teachers, health care workers, and business owners who live in communities across our state. This is unacceptable. They can’t 'go home' — this is their home."

The narrator of the Facebook video, posted by the labor group We Do The Work 7, at one point acknowledges that the National Guard is made up of average citizens.

"The National Guard, we understand that these are working class folks -- multi-racial, multi-gendered working-class folks," Cliff Willmeng as he walks with the camera, scanning the guardsmen loading into their rigs.

"But the labor movement and the National Guard has had a river of blood between the two institutions."

He told his Facebook viewers what they were witnessing was rank and file union members ejecting the National Guard.

"You don't have to go home but you can't stay here!" Willmeng added as they walked past the trucks.

Let’s be clear: The brave men and women of the Minnesota National Guard are our neighbors.

They’re teachers, health care workers, and business owners who live in communities across our state.