Minnesota's governor will retain peacetime emergency powers at least one more month, after House Republicans fell short in attempt to strip them from him. 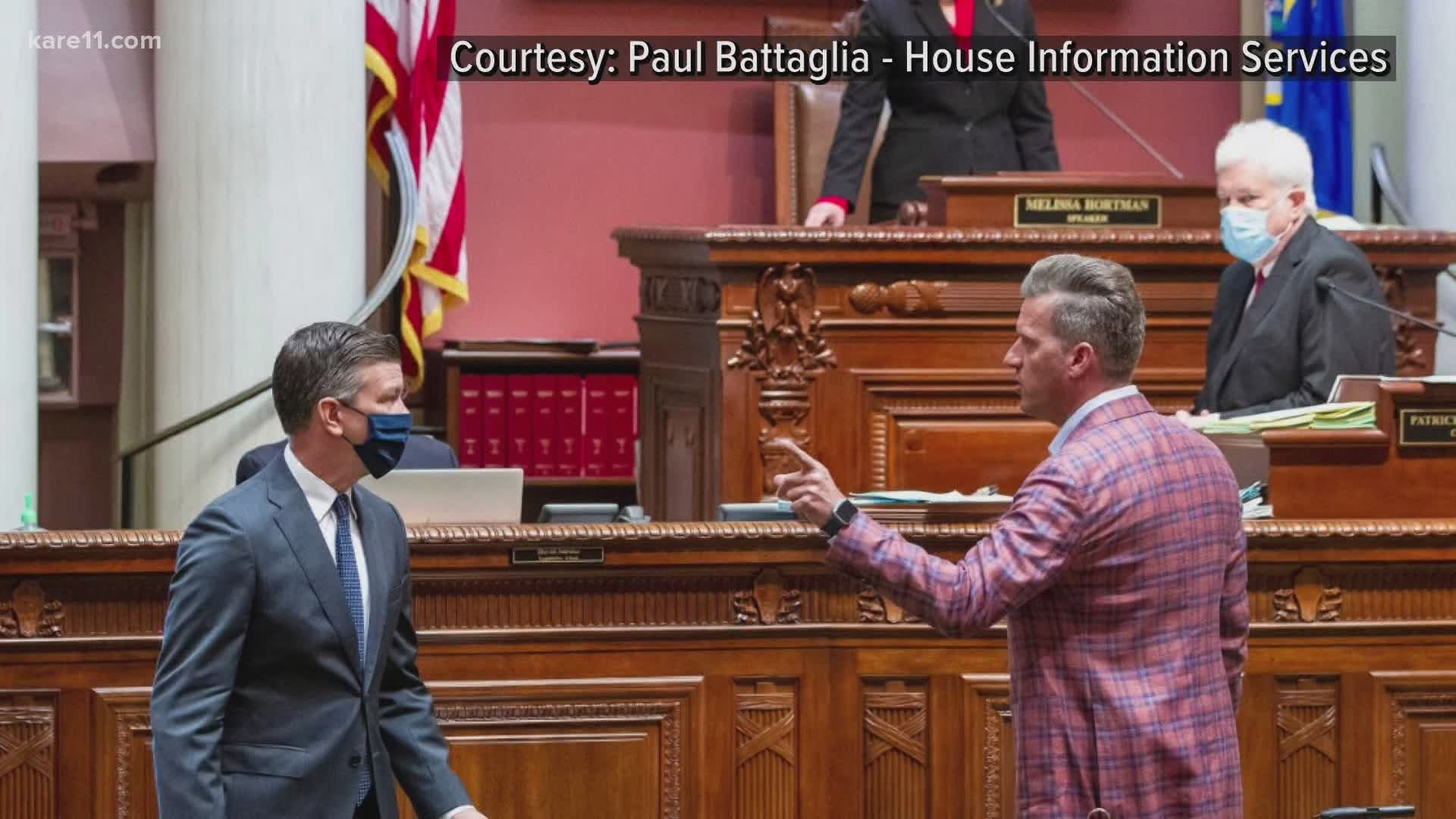 ST PAUL, Minn. — Governor Tim Walz will have at least another 30 days to make major decisions about the Minnesota's COVID-19 response without getting prior approval from the state legislature.

House Republicans Tuesday came up short in their latest effort to strip the Democratic governor of his peacetime emergency powers. They contend the coronavirus pandemic in the North Star State is no longer the type of unforeseen emergency spelled out in state law.

"This is not about whether COVID is dangerous enough," House Minority Leader Kurt Daudt told colleagues. "Is this something that requires the governor to act unilaterally?"

Rep. Daudt and fellow Republicans say it should up to the state's divided legislature to chart Minnesota's course. This includes such decisions as if schools will be allowed to choose whether to open fully or not in the fall.

DFL lawmakers, who hold the majority in the House, asserted there's still too much we don't know about how COVID-19 behaves as a disease and it's too early to conclude Minnesota has moved from out of the emergency phase.

"We've learned a lot about this disease in six months that we didn't know before," House Majority Leader Ryan Winkler argued.

"But I think it's foolish to think that now we have somehow arrived at the moment where we understand everything about COVID-19, we can make firm policy decisions, we can provide absolute clarity and certainty and go on with our lives."

After a four-hour debate, the GOP's motion to suspend rules and allow a floor vote lost by a 63 to 70 margin. A day earlier the GOP-controlled Senate voted to strip Walz of his extra powers. It takes approval by both chambers in order to stick.

After spirited debate, House Republicans’ motion to strip emergency powers from ⁦@GovTimWalz⁩ fails by a tally of 63 to 70. The governor keeps his special powers 30 more days. #mnleg pic.twitter.com/6qab61apjA

When asked about the issue Tuesday, Gov. Tim Walz said under normal circumstances he'd welcome having the legislature take the lead on COVID. But some of the actions he needs to take can't wait for a deliberative body to hold hearings and move bills through an often-divisive legislative process.

"I am very happy to have the Legislature do some of these things, but it's just very hard to get a decision that way," Walz told reporters at a housing event in Minneapolis.

"Some of these things need to move."

Those bills involve general obligation bonds -- a form of borrowing -- and, as such, require a super majority of 81 votes to pass.

Even if all 75 DFL lawmakers voted for the $1.3 billion package of statewide construction projects, at least six Republicans would have to join them for it to pass.

During the House Ways and Means Committee hearing Tuesday, Rep. Pat Garofalo, a Farmington Republican, told his Democratic counterparts they were wasting their time.

"I just wanted to wave my hands and remind the house DFL there are non-DFL members in the House of Representatives and you need our votes to pass this bill and we’re not voting for it because you continue to refuse to negotiate with us," Rep. Garofalo remarked.

Gov. Walz has said he'll make an announcement about the 2020-2021 school year on July 27, which falls inside of that 30-day window where he can take emergency actions without legislative consent.

Capitol Republicans say there's no reason for returning to distance learning this fall because the state's daily death count has dropped to single digits, and so far, none of the fatalities have been under the age of 20. School districts and the Minnesota Dept. of Education are exploring a variety of scenarios, including a hybrid model enabling children to do part of their learning in an actual classroom.