The governor greeted masked students as they arrived for the first day of classes and made virtual visits to students starting the year with distance learning. 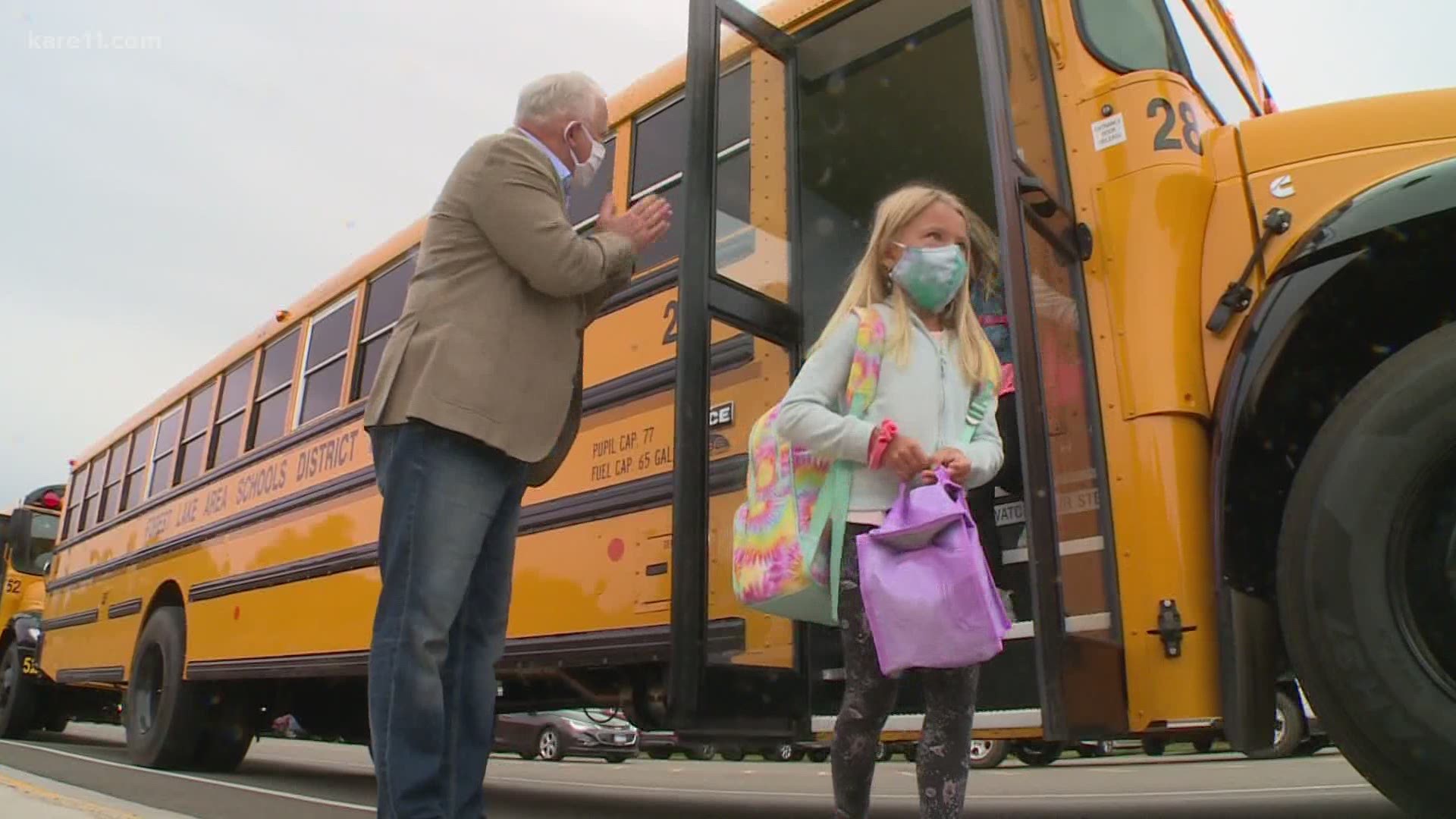 MINNEAPOLIS — As a career teacher, Gov. Tim Walz could barely contain his excitement as he greeted children hopping off buses outside Wyoming Elementary School on the first day of classes Tuesday.

They arrived wearing masks and made attempts to social distance as they headed into the building guided by teachers and other staff. It was one of seven grade schools in the Forest Lake Area Public School launching the school year with students in real classrooms.

Superintendent Steve Massey said the district's secondary students will do a hybrid of in-person instruction and distance learning, but he hopes the area's coronavirus infection rate stays low enough to allow the youngest students to see their teachers in person.

"There's nothing more powerful than a face-to-face learning opportunity," Massey remarked. "Kids are learning to read and do math, not to mention the social emotional piece of kids connecting with their peers and adults who care about them."

Gov. Walz said classroom experiences like these were made possible by the painful sacrifices Minnesotans made as they complied with his emergency orders since the COVID-19 pandemic hit the state in March.

"This feels for me for the first time in six months of us starting to see what the end can look like if we get this right, if we stick with it," Walz told reporters outside the school.

"I have the same COVID fatigue everyone else has, but the fact of the matter is we made a lot of good decisions and sacrifices early on, and now we have kindergartners who got to walk into their classrooms and be with their teachers and their friends on the first day."

As a classroom teacher for 20+ years, the first day of school is my favorite day of the year. It's incredible to see the ways our educators and parents are keeping students safe amid COVID-19. Thank you to the Wyoming Wildcats for letting me join you—from a distance—this morning. pic.twitter.com/2wAxLGSbQ1

The Forest Lake area fell within the infection rate parameters that gave the local school board the confidence to allow children to return to the building. But other districts across Minnesota chose to start the year with all students in distance learning, speaking to their teachers on computer screens.

"This is the real testing point. If we can manage over the next few weeks to keep school open, to keep infection rates low, to keep that transmission low and people start thinking about that, we're in a pretty good space," Walz explained.

The current peacetime state of emergency expires at the Friday, Sept. 11. If Walz extends the emergency for an additional 30 days, he'll most likely call lawmakers back to the Capitol for what would be the fourth special session since the regular 2020 session ended in May.

State statutes reads legislators must be given a chance to rescind the governor's emergency powers each time he extends them. In the first three special sessions, the Republican-controlled Senate voted to revoke his special powers, while the DFL-controlled House rejected a motion to bring the issue to a vote.

Republicans have argued that the state is no longer in the type of emergency the law envisions, and that hospitalizations and deaths have remained stable throughout fluctuations in the state's COVID-19 infection rate.

GOP leaders say it's time let lawmakers have an equal voice in the state's response to the pandemic. In practice, a shared power arrangement would enable Republicans to bar the governor or placing any further restrictions on bars, restaurants, churches and schools.

House Democrats assert that COVID-19 is unpredictable, so it's important for Walz to have the ability to move quickly rather than wait for a divided legislature to agree on a course of action.

GOP senators say they're very unhappy with Kelley's decision to delay the Enbridge Energy Line 3 Pipeline Project. The Minnesota Public Utilities Commission has twice approved a permit for the project, which will replace an aging existing pipeline in northern Minnesota. But the Commerce Dept. appealed the decision, saying Enbridge should be required to prove there's a demand for the Canadian oil that will run through the line. 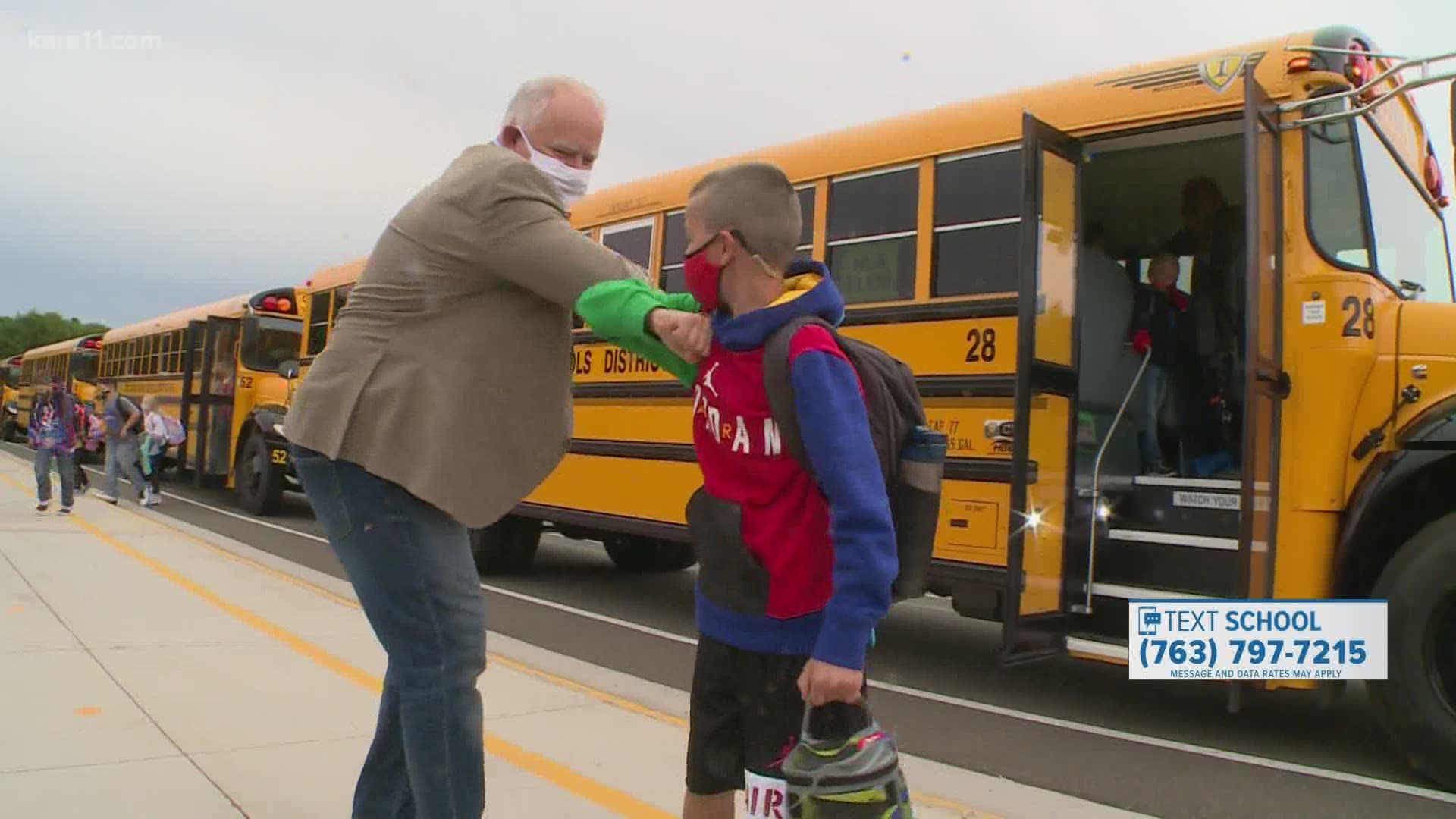