Those who study, work in politics review Warren's 'women in politics' question

“Research shows that when women run for office, women win at the same rate as men or at higher rates..." 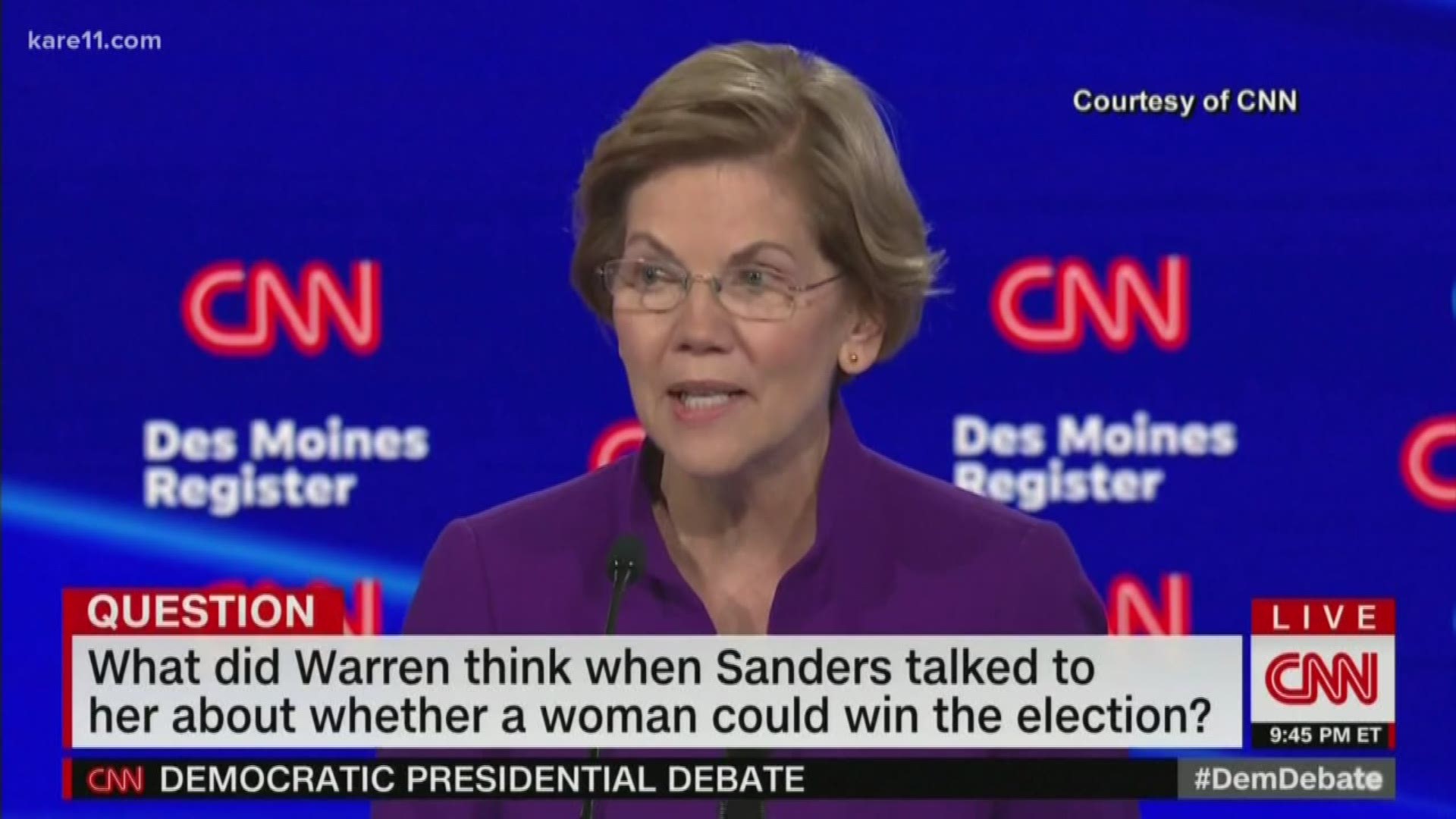 MINNEAPOLIS — The question may have dominated the Democratic presidential debate Tuesday night, but political analysts and those who work on campaigns say the answer is crystal clear: a woman can indeed be president of the United States.

“Research shows that when women run for office, women win at the same rate as men or at higher rates. In 2018, for example, the women running for U.S. Congress actually won their elections and their primaries at a higher rate than men did,” said University of Minnesota Political Science Professor Kathryn Pearson.

The seemingly basic question rose to the debate stage when Senators Elizabeth Warren and Bernie Sanders discussed a conversation, during which Warren maintains Sanders suggested a woman could not win a presidential election. Sanders adamantly denies that claim.

“Anybody who knows me, knows that it’s incomprehensible that I would think a woman cannot be president of the United States,” Sanders said.

Warren countered with an assessment of her own: “The only people on this stage who have won every single election that they’ve been in are the women, Amy and me,” she said, referring to Sen. Amy Klobuchar.

“In fact, most of the women who run tend to have more experience than the men who run,” she said.

And that’s a fundamental belief shared by Women Winning, a non-profit organization that supports pro-choice women candidates in Minnesota.

“A woman can absolutely be elected to president of the United States,” said Meggie Wittorf, the organization’s executive director, adding that you need look no further than 2018, when “Women Winning-endorsed candidates had a 70 percent win-rate across Minnesota.”

The organization saw that “win-rate” jump to 85 percent in 2019 among their endorsed candidates, and they’ve also seen a 35 percent increase in membership since 2016. They currently have 17,000 members statewide.

Wittorf notes that despite this proven record of women’s success, candidates still confront the cost of “false narratives.”

“The way we hear it many times is, ‘I really like her. I just don’t know if she can win…’ These narratives are used to create fear or apprehension, insinuating that women cannot be elected. And we absolutely know that that is false,” she said.

Wittorf says Women Winning will continue to battle that perception, given all that’s at stake. And, she notes, the results will only benefit the greater community.

“What can happen is women, people of color, any underrepresented community, it prevents them from having their voices heard where really important decisions are made,” she said, adding, “Study after study shows that women pass more legislation, they secure more funding for their districts and their communities.”

By the way, Wittorf also noted that Minnesota leads the country with women representing half the state’s federal delegation, including the states two U.S. senators. She also says they’re seeing a widespread surge in involvement of women: from candidates, to donors, to volunteers, to voters.

“It’s not only that we’re seeing women winning at higher rates, we’re seeing them be incredibly effective at governing,” Wittorf said, adding, “And so seeing that strength on the debate stage was so exciting. And I really hope that it resonated with people.”

To learn more about the Women Winning organization, just go to: womenwinning.org

RELATED: Disagreements at Democratic debate over US military abroad