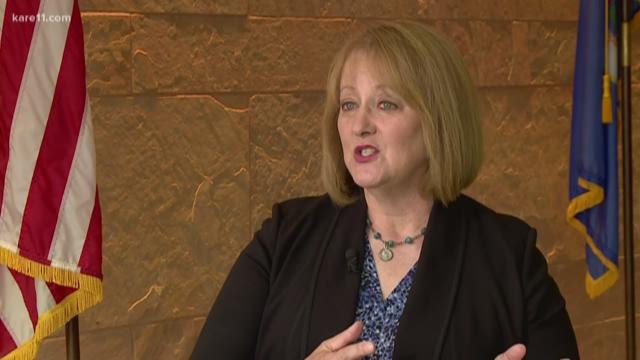 ST PAUL, Minn. — It's a call Pam Wheelock never expected to get, while vacationing in northern Minnesota last weekend.

But after considering it for one hour she said yes. She accepted the offer from Gov. Tim Walz to take the helm as acting commissioner at the Dept. of Human Services.

"It was a little bit different weekend than what I had expected," Wheelock told KARE.

"There was no reason that I shouldn’t say yes to the governor about helping out on an interim basis, to come in and see about staying focused and keeping the work moving forward."

The call came the same day DHS Commissioner Tony Lourey resigned, after just six months at the post. And that happened just days after longtime deputy commissioners Chuck Johnson and Claire Wilson announced they'd be leaving, without any explanation.

Questions swirled around the Capitol, and Republican lawmakers speculated there was an underlying scandal that was yet to be revealed.

A couple days after Wheelock came aboard Johnson and Wilson rescinded their resignations and agreed to stay on.  And Wheelock reiterated what Gov. Walz said when Lourey stepped down; that it was his choice, and nothing more should be read into it.

The agency also has 7,200 employees engaged in delivering a complex variety of services, including the regulation compliance.

"It's very important to try and stay focused and to help them do their work and try to keep our energy where the real issues are in the organization," Wheelock explained.

"My goal is to bring in some stability and help take down the temperature so we can do the work we need to do and change the internal practices and priorities as we need to in an ever-changing environment."

DHS has also been a lightning rod for Republican lawmakers after the agency was bilked out of tens of millions of dollars by private companies operating child care centers that fraudulently billed the state.

Gov. Walz has called that unacceptable, and agrees DHS was "negligent" for not catching the fraud soon enough. The DHS inspector general, Carolyn Ham, is currently on leave as child care assistance fraud problem is investigated.

Some Republican lawmakers have used the words "chaos" and "dumpster fire" to describe DHS, but Wheelock looks to reassure the public that the core work of the agency continues.

"We have great employees that care about the mission of this organization, that just want to come to work every day and do their best for the citizens of Minnesota and the people who rely on them."

Wheelock brings a treasure trove of management experience in both the public and private sectors, including time with the University of Minnesota, the Minnesota Wild, Bush Foundation, Habitat for Humanity, Blue Cross Blue Shield and the St. Paul Mayor's Office.

But her first time in the media spotlight was as Gov. Jesse Ventura's finance commissioner, where she had to crunch numbers and formulate two-year budget plans.

Walz applauded Wheelock's willingness to step into the fray.

"I think a decision of Pam to basically drop her vacation and say, 'Give me an hour' and call back and say, 'I’ll do it' speaks volumes to the sense of service in Minnesota," Walz told reporters Monday.

Some lawmakers have suggested the Dept. of Human Services is too large to function well, and that it needs to be divided into smaller agencies. Wheelock said that idea was already be floated 35 years ago when she worked as a budget analyst at the Minn. Dept. of Finance and had to review the DHS budget.

"I think it’s a relevant question, and I think there’s no one magical way to deliver services, and I think it should continue to be discussed and that's healthy," she remarked.

"We should always welcome the scrutiny and be open to really examining: are we structured in a way that serves our population in the most effective manner and serves the taxpayers of Minnesota?"