Jeopardy champion James Holzhauer's historic run has come to an end. Now, rumors and questions on social media claim he either gave up, or was set up by the show. 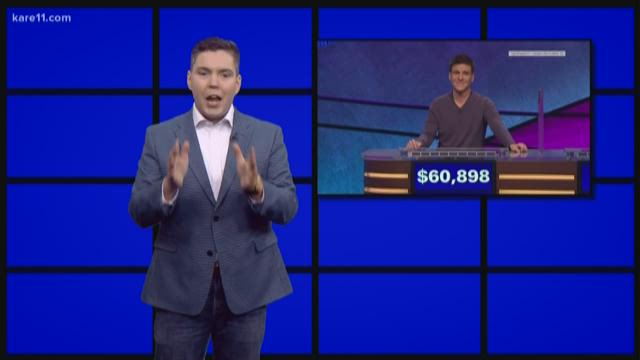 MINNEAPOLIS — The streak is over for James Holzhauer.

In 33 Jeopardy appearances he racked up just over $2.4 million.

Now that the historic run is over, there are a lot of questions and rumors about how James lost and who is this new champion?

Like the show itself, we’re going to break things down into categories, and answer one question at a time.

The answer? What is no.

In 33-appearances Holzhauer made just over $2.4 million.

But if you break it down by episode, it’s not even close.

According to Jeopardy’s producers, the average daily winning is about $25,000.

Next category, “Taxes,” how much will Holzhauer have to pay?

The answer? What is a lot.

Together, those taxes add up to around $1.2 million.

Next category, “Who is Emma?”

The answer? Who is the woman who beat Holzhauer.

Rumors on social media allege Emma Boettcher, a 27-year-old librarian from Chicago, was handpicked by the show to dethrone Holzhauer.

She appears to be the perfect contestant to do it, not only is she smart, she also wrote a paper in grad school about the show where she analyzed more than 22,000 Jeopardy clues.

Show producers tell KARE-11 News they didn't know about the Boettcher’s grad school paper when they chose her to be on the show.

Are the rumors online true that Holzhauer tried to lose?

The answer, what is no.

Holzhauer himself told sports betting website The Action Network he knew he was the underdog going into Final Jeopardy, but instead of betting high, like he normally does, he decided to take a conservative approach, because he thought Emma would probably go big too, and outbid him, so he decided to bet just $1,399, enough to ensure he would beat the 3rd place contestant.

He said his plan was to hope Emma got the question wrong, and he could slide in with just enough money to win.

But Emma got it right, and the rest is history.

Jeopardy producers say Holzhauer will return to the show in this year's Tournament of Champions.

We asked if they'd put him up against Ken Jennings to see who really is the best contestant of all time.