KARE 11's Randy Shaver sits down with co-anchor and good friend Julie Nelson to talk about what's next in his battle against cancer. 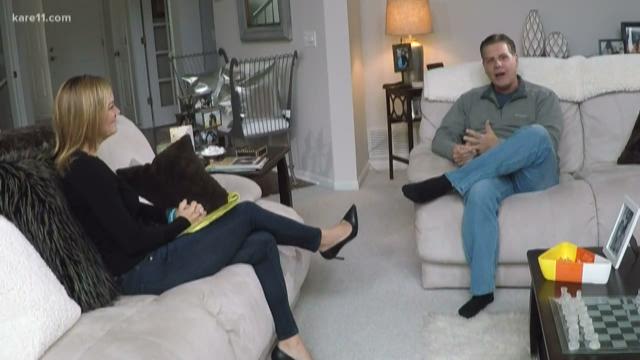 GOLDEN VALLEY, Minn. - He thought he had put it behind him. But now, KARE 11's Randy Shaver is back fighting the battle he's worked so hard to put to an end.

This time, he faces off against prostate cancer. And we know, he'll go #2for2.

Shaver beat cancer once before and, this past April, looked back at his journey 20 years ago, as well as the advancements made since that time. He recently sat down with his co-anchor and good friend, Julie Nelson, to talk about what's next.

Julie Nelson: So let's talk about your choice in treatment because initially you thought you were going to have surgery.

Randy: I was planning on it.

Julie: What changed your mind?

Randy: Everything. You know, first of all, I thought I knew ... I've had friends go through prostate cancer. I thought I knew what they were going through. I had no idea. This is a totally different thing. It's extremely personal, for men, and it's why I'm sure most men never talk about it. And it's not necessarily the cancer, it's the side effects of the treatments that you go through that effect your personal life and that's what makes it different.

And so, I was set up to do surgery full steam ahead and then ... I talked to a lot of doctors about a lot of things and finally landed on hormone radiation. It's just the best for me.

I can tell you that I've had some hot flashes because this hormone turns off my testosterone, which in essence kills the cancer, so it's a great thing but it also basically turns my system into a menopausal woman and so I'm starting to feel those effects.

Julie: I just have to ask because you battled this so valiantly 20 years ago. You had just celebrated 20 years cancer free.

Randy: How ironic is that?

Julie: Well, how do you deal with that emotionally? You were really angry.

Randy: At first, I was angry. I was ticked. You know, because I knew it was a possibility because we'd been tracking my PSA but in the back of my mind, I kept saying this is going to be nothing. And now finding out that it's an aggressive form. And this time around, I'd be sitting downstairs just stewing watching TV. I couldn't concentrate at work or at home. I just couldn't concentrate. I was so mad.

Julie: It does seem incredibly unfair.

Julie: Last time you went through this, there were people who would say you came to work when you shouldn't have come to work.

Randy: Oh my wife will tell you that. My wife had a great quote. She said, "I wanted to lay down in the driveway so he couldn't leave the garage."

Julie: Are you going to make her lay down in the driveway this time?

Randy: No ... (laughs) No, because this is different now.

Julie: But it is going to wear you out.

Randy: It is. But I'll just have to pace myself.

Randy: Yeah, well I will do my best to figure that part out when we get there.