From June through August, the cameras will be mounted in one of the state's most dangerous intersections at Highway 15 and 2nd Street in St. Cloud 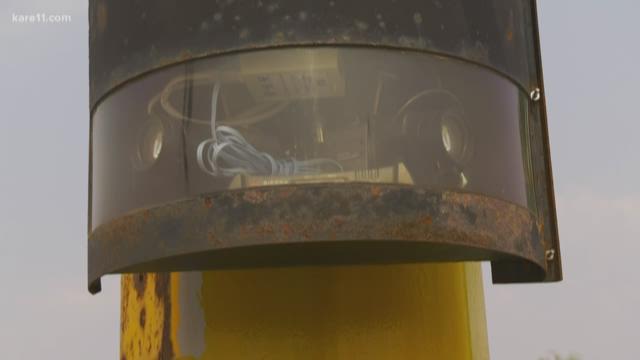 The reason for the tech upgrade is simple. According to the Department of Public Safety, drivers who run red lights in Minnesota have contributed to 22 fatal crashes and at least 2,000 injury crashes in the last three years.

But policing red lights is tricky in Minnesota, because the state doesn't allow fully automated cameras that snap photos or license plates and mail tickets to potential violators.

"Our system is vastly different," said Minnesota State Patrol Captain Brad Ouart. "Our system is a video live stream that feeds to the officer, the troopers' cars, that they watch in real time."

From June through August, the cameras will be mounted in the intersection of Highway 15 and 2nd Street in St. Cloud, which is consistently ranked among the state's most dangerous.

The cameras will only capture vehicles traveling south on Highway 15, and will use radar to generate an alert when a vehicle passes the crosswalk after the light turns red.

"It gives me the tone, makes the recording, takes several pictures, and then we still have discretion to determine whether or not we should issue a citation or a warning," said State Patrol Lt Paul VanVoorhis.

For those worried about privacy, troopers say the cameras were intentionally designed not to capture sensitive info.

"You cannot determine license plates, you can't determine faces of drivers," VanVoorhis said. "You have to match that vehicle up with what we're seeing so that's why we're sitting downstream within sight of the intersection."

If potential violations do not result in citations, the system doesn't store the data for long.

"It will capture data for 48 hours and the system itself will get rid of everything past 48 hours," Ouart said.

The cameras will collect data on the number of red light runners during certain times of the day, so the State Patrol can tailor enforcement efforts. According to MNDOT, the cameras viewing the southbound lanes of Highway 15 have captured an average of two red light violations an hour.

The cameras will be in place for the next three months, after that MNDOT and State Patrol leaders will review their effectiveness and consider whether to expand the program.