A referee at a MN college basketball game suffered a heart attack on the court and was brought back from cardiac arrest with an AED. 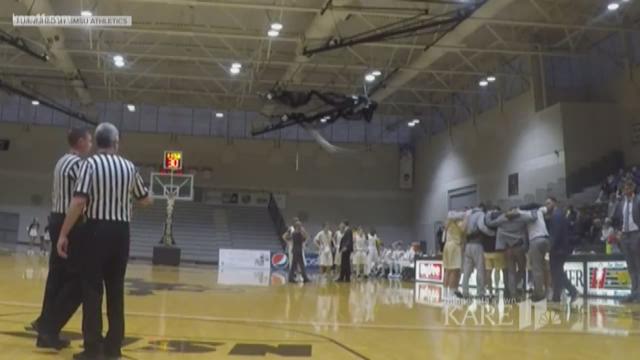 "I love refereeing. I have a passion for it," Schroder said.

"About two minutes to go in the first half, I started feeling really tired," Schroder said.

In fact, he planned to pull himself out of the game once they reached the 10-minute mark. But he didn't last that long.

After running down the court along the bench on a fast break, he collapsed and didn't move.

"It felt inside like it was in slow motion. Like my feet went, 'One… two...' Then it got really blurry and I went face down," Schroder said.

Face down on the hardwood, suffering a heart attack, Schroder went into full cardiac arrest.

As players joined in prayer, training staff from both teams took action. And a doctor who happened to be at the game, the brother-in-law of SMSU coach Brad Bigler, started CPR and brought Schroder back with an AED the Mustangs keep near their bench.

Schroder is already resting at his home near Sioux Falls after quadruple-bypass surgery on Tuesday. He's thankful to return to his family. Thankful to the heroes who saved his life and for the emergency device that made it possible.

He's already setting goals to make it back to the hardwood.

"Hopefully I'll still be able to work at that level and continue to do what I love to do," Schroder said.

Schroder said he is in good shape and he never thought he would have a heart attack, but he has a family history of heart problems.

Coach Bigler at SMSU said he's proud of the trainers and his brother-in-law who helped save Jeff last week.