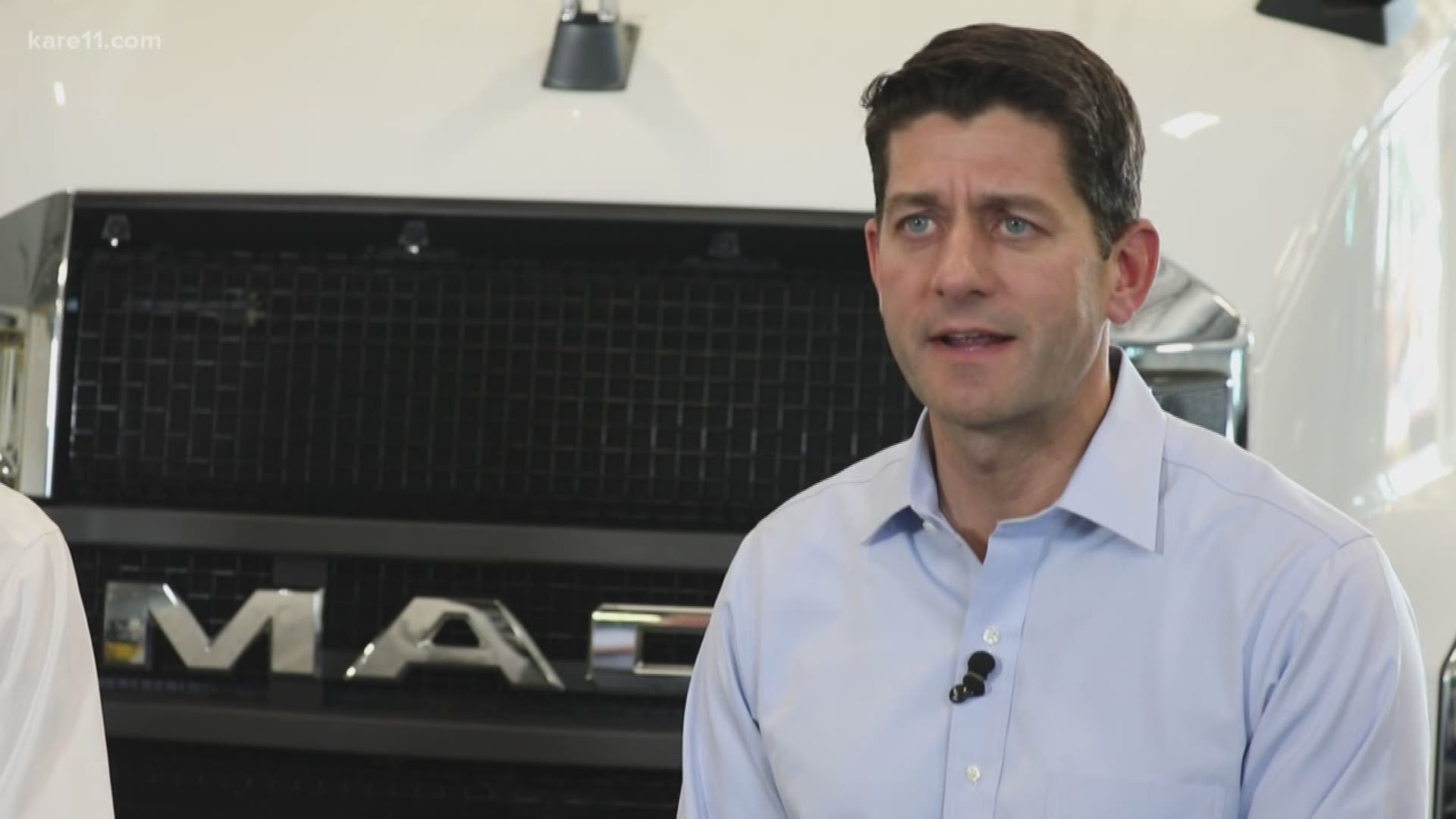 BURNSVILLE, Minn. -- House Speaker Paul Ryan played up the positives of the federal tax code overhaul Monday during stops in the Twin Cities, including one at a semi-truck and heavy equipment dealer.

After a tour of Nuss Truck & Equipment in Burnsville, Ryan talked about how the company is now able to immediately write off the cost of expansion and new equipment, under the new tax law.

Ryan will retire after this term, but he's still working to hold the Republican majority in Congress. Rep. Jason Lewis, a first-term Congressman from Minnesota's 2nd District, joined Ryan on the tour.

They clearly can be expected to keep the tax reforms front and center heading into the November's MId-term election.

"It’s exactly why the Atlanta Federal Reserve Bank is talking about four, four and a half percent growth," Rep. Lewis asserted.

"So, everybody's got this rising tide of growth where everybody benefits, that’s a pretty good thing to run on and we’re pretty proud of it."

Bob Nuss, the company's CEO and President, said the tax law will encourage companies like Nuss to expand and add people to their payrolls.

"The tax bill helped on jobs, it helped on tax rates, gave us an opportunity to give bonuses to our employees," Nuss explained.

"It gave our family an opportunity to make decisions on whether to reinvest in our business."

But Nuss, as Volvo and Mack Truck dealer, is also concerned about the Trump Administration's new tariffs and possibility of a trade war.

"We have suppliers in China and around the world," he said. "Our major supplier, Volvo Trucks, is in Sweden, a lot of our trucks come from Sweden, a lot of our steel comes from overseas. And as those cost go up, we'll be forced at some point to pass that along to our customers."

The House Speaker said he agrees with the President's overall goal, of achieving a level playing field when it comes to trade. But he acknowledged the tariffs are creating a lot of concerns with farmers and businesses that source raw materials overseas and sell finished products in those markets.

Lewis will once again face Democrat Angie Craig in November. The Craig campaign reacted to Ryan's joint appearance with Lewis with the following statement:

"Speaker Paul Ryan and Jason Lewis are together in Burnsville today following Lewis being named one of the most purchasable congressmen last week. Their votes might be for sale, but we know voters from the Second District can’t be bought and are ready to make a change."

The Craig campaigned referenced a list of members who have received donations from PACs connected to Wall Street and the banking industry, a list assembled by End Citizens United, a Democratic PAC.

While in Minneapolis, Ryan also visited with Best Buy employees, and took part in a roundtable discussion at Ames Construction in Burnsville about technical careers education.