Sen. Tina Smith has joined the push in Washington D.C. to tackle the child care shortage that's affecting families here in Minnesota and across the nation. 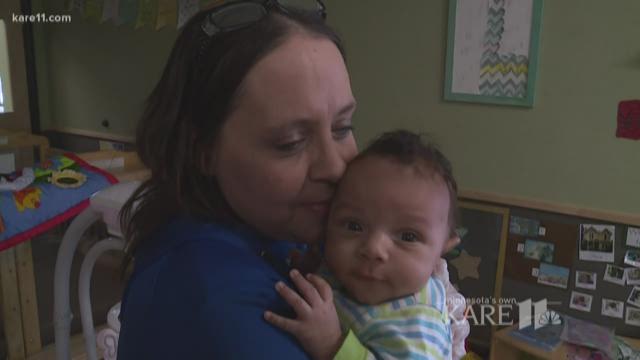 "I’ve talked to families in greater Minnesota that literally drive 50 miles each way to take their children to a place where they can get quality child care and early education," Sen. Smith told KARE.

In fact, the child care shortage is so pronounced in some parts of Minnesota and the nation, they've been labeled "child care deserts" by advocates. According to Smith, 84 percent of the children living in rural areas of the state are in such deserts.

That's one of the reasons Smith signed onto the Child Care for Working Families Act, which was introduced by Sen. Patty Murray last fall before Smith was appointed to the Senate.

The legislation would double the number of children who are eligible for programs subsidized by federal block grants, assist states in paying for universal pre-K programs and increase training and pay for child care providers.

"It would help make sure we get people who want to be in early education, help them get training, so they are prepared to step in," Smith explained.

"Then also help make sure families who need it have some help paying for it, because child care right now is one of the most expensive things in a family’s budget – it can cost more than their rent."

Smith is holding meetings around Minnesota, speaking to providers, parents and early learning advocates about ways to solve the shortage. One of those gatherings was Friday at Think Small, a nonprofit in Minneapolis that works to improve quality in the field of child care through training, sharing resources and advocacy.

"The child care shortage has many implications for our children, because how else are we going to prepare all of our children for kindergarten and beyond?" Dianne Haulcy of Think Small, told KARE.

"It also has implications for families. How can you go to work when you can’t find high quality child care for your family? It’s very difficult to go to work."

Many of those who attended Friday's meeting said it's important to raise compensation levels, and to expand awareness the critical role providers play in educating children.

"It’s not just babysitting, it’s not just watching a child," Haulcy explained. "It’s a skilled field. It takes skill to get a child in those early years to prepare them for kindergarten."

Some policymakers resist the idea of lumping together early education and the play that happens in child care centers and private daycare homes. But Smith and other advocates disagree.

"Being with other children is very important for social emotional learning," Shamsa Idle, a family educator at the Minneapolis nonprofit Way to Grow, told KARE.

"It's better to be involved with other children, to sit with them, to play with them, because children learn through play, through singing, through talking."

Idle said Way to Grow does a lot of personal outreach with parents who aren't aware of the subsidized programs that are available to lower to middle income families.

"We help them make connections, and we follow up with them. We can see the differences in the children."

The child care shortage and affordability issue has been on the front burner at the Minnesota Capitol for years. Smith, who served as Gov. Mark Dayton's lieutenant governor, was well-versed in the issues surrounding how to pay for early education.

The majority of those in the Minnesota Legislature have supported new investments in preschool aged children, but there's been a big difference of opinion on where that money is best spent.

Gov. Dayton and his fellow Democrats have favored expanding universal pre-K programs in public schools. Republicans, on the other hand, would rather see more money go to early learning scholarships that can be used in a variety of daycare and preschool settings.