Holding her baby for the first time was "an amazing feeling." But a day later, Serena said, "everything went bad." 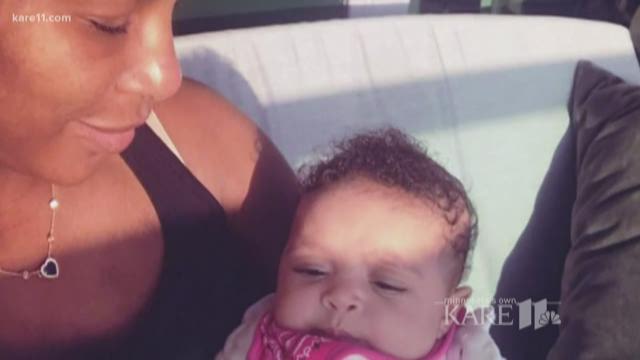 MINNEAPOLIS - On the court, Serena Williams dominates. Some matches more challenging than others. But life served its greatest challenge for Williams after her daughter was born.

In Vogue Magazine, Williams first shared her medical nightmare. She says holding her baby for the first time was "an amazing feeling." But a day later, Serena said, “everything went bad."

The tennis star had trouble breathing and told the staff it was a sign of blood clots. She had the symptoms before but initially, a nurse brushed her off. Serena persisted and told doctors the treatment she needed to survive.

Tuesday, Williams posted on Facebook, "I hope my story can inspire a conversation that gets us to close this gap.

But her story doesn’t surprise Dr. Rachel Hardeman, an assistant professor at the University of Minnesota's School of Public Health.

“Her story is an important one but it is one in millions sadly,” she said. “The disparities we see in birth outcomes like Serena's happen regardless of socioeconomic status. It doesn't matter if you are a black woman who is highly accomplished like Serena or someone like me who has a Ph.D. and is married to a physician. The research shows that doesn't matter.”

Hardeman is a leading a project exploring ways reduce racial inequities in birth outcomes. According to the CDC, 50,000 women experience complications during pregnancy every year. About 700 women die and black women are three to four times more likely than white women in part due to high-risk factors. Hardeman says the solution lies in improving the quality of care for everyone.

“Think about the role that unconscious bias plays and how they are delivering care. Those are huge things that can go a long way for improving the quality of care for everyone,” she said. “The statistics don't lie. They tell an important story. It is one we can't ignore now. If we are not working to close the racial gap we aren't going to get far in improving the health and well-being of anyone in our society.”