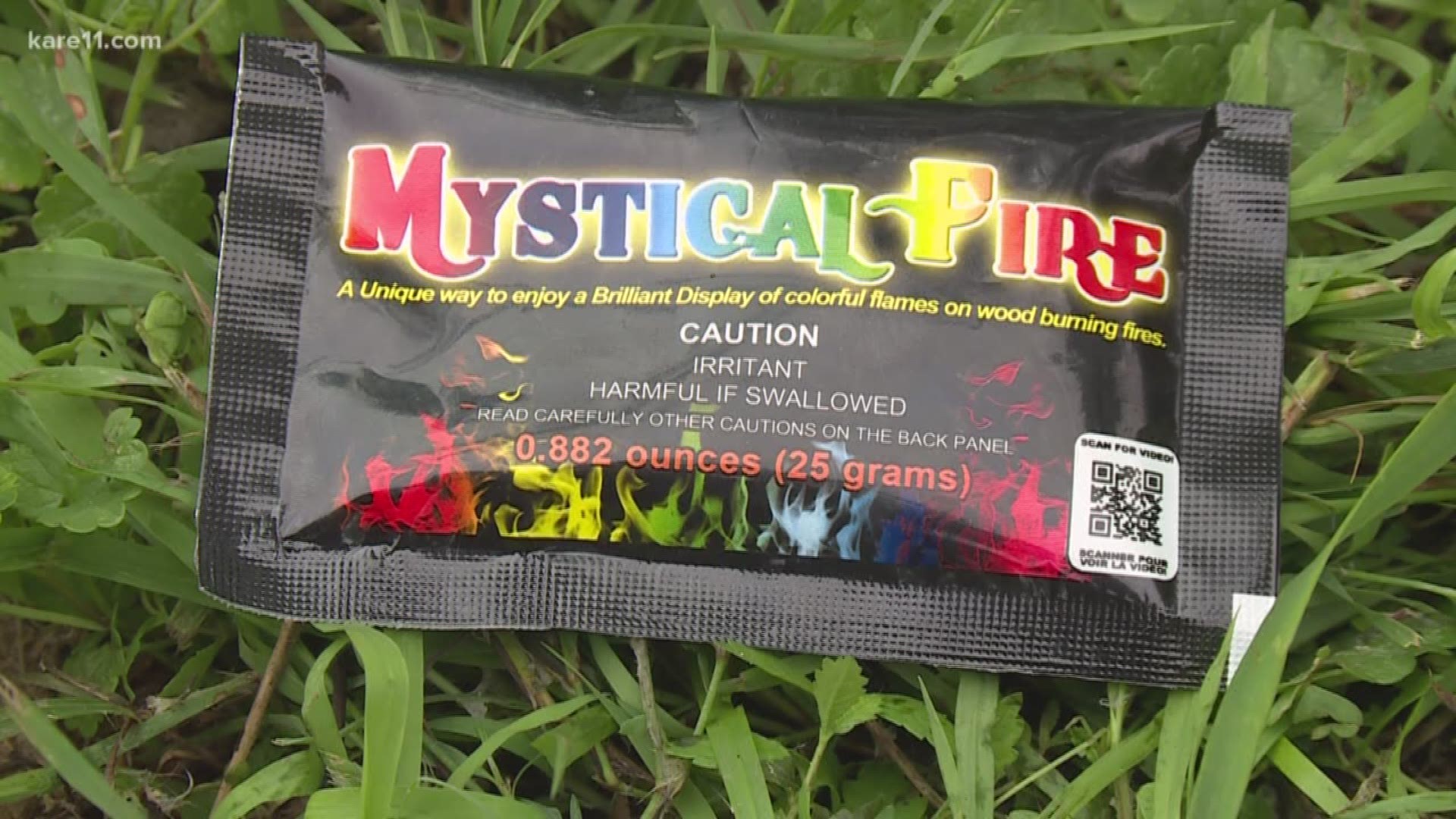 MINNEAPOLIS – As the Fourth of July nears, Minnesota Poison Control is warning the public about a product used to spark colored flames in campfires.

Sold in a small foil packet, the chemical has sickened several Minnesota toddlers, even sending one to the hospital.

Minnesota Poison Control center employees have responded to four poisoning cases from flame colorant products since summer began, three of the cases from the product, Mystical Fire, made by Mystical Distributing in Canada.

It contains a copper sulfate chemical that is used to bring bright colors like blues and greens to flames.

The warning on the package warns the package should not be opened, and thrown directly into the fire unopened, reading: “Caution! Irritant. Harmful if swallowed. Keep out of reach of children.”

The warning also says the product can cause kidney, liver and blood system damage.

Minnesota Poison Control Medical Director, Jon Cole, MD, says the chemical can cause internal burns of the esophagus and intestines. Cole says in toddlers, one way to detect poisoning is if the sickened child has bright blue or bright green vomit, the same color of the product in the flames.

“It’s typically toddlers getting into open packages because they are just sort of born for mischief, they tend to put the world into their mouths,” said Cole. “Adults occasionally mix it up for other salt or candy based products, we’ve had people mix it up for Pop Rocks candy and also for tea.”

A published case from Massachusetts details how a 60-year-old man had mistaken Mystical Fire for Pop Rocks candy, and died from the ingestion.

Mystical Distributing President Mark Phillips said his product is tamperproof, and reiterates it should not be opened.

“A child will not open this package on their own and I have no idea why somebody would put this product where someone could access it, because it’s thrown in the fire, not something to be left on the coffee table,” said Phillips. “I don’t understand how it could happen. I feel bad that it happened.”

Phillips noted that he sells Mystical Fire worldwide and has not heard of any severe problems with ingestion of his product.

“I’ve been selling this product 16 to 17 years, we don’t have any problems with it. There is some negligence or neglect on somebody’s part, why it got in the hands of the toddler,” said Phillips.

The Minnesota Poison Control staff reported Mystical Fire to the Consumer Product Safety Commission after the cluster of poisoning cases. To Dr. Cole, the hope is with summer crowds soon around the campfire, awareness sparks caution.

“It’s a perfectly fine product to use but should be treated with real caution and definitely never left open near children,” said Cole.