Sheriff to cut sentences of inmates who helped fallen deputy

The sheriff said he'll knock off some of the sentences of the inmates. 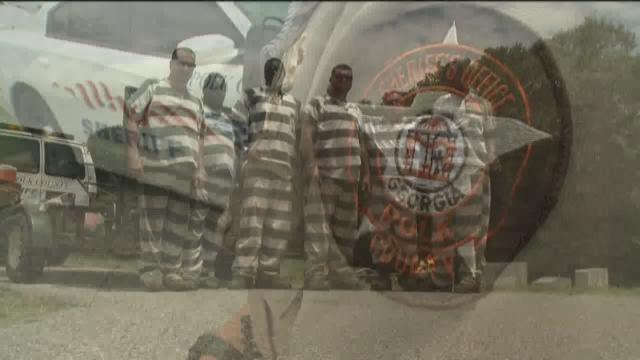 POLK COUNTY, Ga. -- Polk County's sheriff said he plans on knocking some time off of the sentences of the inmates who stepped in to help when a deputy went down.

The deputy, who asked not to be identified, said that when he woke up on the morning of June 12, he didn't feel well.

It was 76 degrees outside, and the humidity was at 100 percent. He was on a work detail at a local cemetery with six inmates -- men he knew well from working together seven hours a day, five days a week.

“We spend a lot of time together,” the deputy said.

PHOTOS | Inmates save officer who passed out during work detail

PHOTOS | Inmates save officer who passed out during work detail

The inmates noticed something about the deputy was less than routine as they were out on a work detail at a local cemetery.

“I started coughing spells, and every time I got those, I'd get hotter,” the deputy said. “It was just harder to keep up…I just finally went down after a couple of minutes doing that.”

The deputy didn't want to show his face for medical reasons. He said he suffers from chronic Chiari malformation. It's where the cerebellum is deformed, which causes fluids to not flow properly.

The deputy believes the high humidity contributed to his collapse.

“Once I actually went down, I was already in one of my hyperventilating spells,” he said. “So at that point, I was just trying to breath. I really wasn't thinking much, but just trying to get everything under control.”

But the six inmates had everything under control for him. They opened his shirt and removed the deputy's bulletproof vest so that they could perform CPR. One inmate grabbed the officer's phone and dialed 911.

“None of my guys ran,” the deputy said. “None of them did anything they shouldn't have done.”

“Anytime we have a trustee or inmate crew, that goes beyond normal duties, we cut them some extra time off,” Moats said.

The inmates are being praised for their heroics and their split-second reactions, and the deputy said they deserve it all.

“That moment when they're out, they're not really inmates to you,” the deputy said. “They're just a group of guys and you're out. You try to be more like friends and in my case, it just worked out for the better.”

The deputy was taken off of work detail and placed on patrol.

The inmates got a free lunch, shortened sentences and the praise of people from across the nation.

Editor's Note: This story was originally published in June 2017 and is being reshared as part of our Year in Review section.