The reality star lost his wife less than two months ago and you can tell she's never far from his mind. 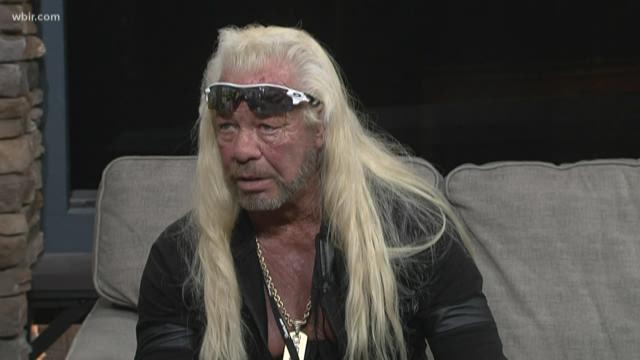 KNOXVILLE, Tenn. — Dog the Bounty Hunter is bringing his bigger than life personality to Knoxville this weekend to meet his fans at Bubba Fest.

He stopped by WBIR's Live at Five @4 to promote his visit, plus talk about his new show, how he wants to make an impact on people's lives, and how proud he is of his family.

Dog had to take a moment early in the interview to ask host Beth Haynes to repeat her name, which she shares with his late wife.

Beth Chapman died in June after a two-year battle with cancer. She was always by his side as the two tracked down dangerous criminals for their reality shows.

The couple and their extended family are featured on a new show called Dog's Most Wanted that will air on WGN, where they go after some of the worst criminals of his 40-year career.

"Beth let's 'em have it," he remembers fondly with a catch in his voice. "She always used to say 'this blood don't run'" in reference to the bravery of their bounty hunting clan.

His work made him famous, but Dog said he also wants to make a difference, maybe even change the lives of the men and women they take into custody.

He loves meeting his fans and said he can't wait to see them at Bubba Fest this weekend, but he's also looking forward to seeing some of the other celebrities, especially Chuck Norris.

"We're brothers from another mother," he said about the legendary action star that will also be at Bubba Fest this weekend.

RELATED: Game of Thrones star to visit Knoxville for Bubba Fest in August

RELATED: Bubba Fest has gone to the dogs! 'Dog' the Bounty Hunter returns to East Tennessee

RELATED: 'This Is Us' star Chris Sullivan coming to Knoxville for Bubba Fest