Single-sort recycling: What exactly belongs in your bin

We took a behind-the-scenes tour to see the good, the bad and the ugly of a single-sort recycling facility. As it turns out, most of us are sticking the wrong stuff in our curbside bins. 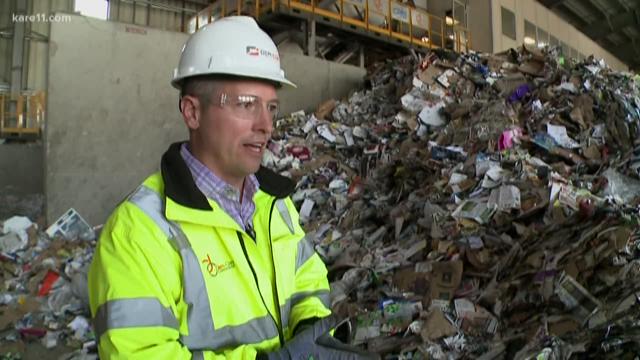 Watch part 2: Recycling: How much of what's in the bin actually gets recycled?

I’ll admit it. When I was assigned a recycling story I kinda rolled my eyes. I mean everyone knows how to recycle, right? What was I going to learn that I didn’t already know? Boy, was I wrong. We visited a material recovery facility…the place all your single-sort recycling goes to get sorted, and it was an eye-opening experience.

“Here's an example, the cardboard is recyclable but when you look inside of it, we have this plastic bubble wrap, and this is non-recyclable,” says Bill Keegan, President of Dem-Con Companies out of Shakopee.

Bill took us on a behind-the-scenes tour to show us the good, the bad and the ugly of a single-sort recycling facility. As it turns out, most of us are sticking the wrong stuff in our curbside bins.

"No matter how many times you put a garden hose in the recycling bin, it's still a garden hose, and it can't be recycled,” says Keegan.

They call it "wishcycling.” Most people have the best of intentions.

“They go to the curb and they want to recycle something, they don't know if it should go into the garbage or the recycling bin, and they say I'll put it in the recycling bin and they'll figure it out. And, what's actually happening, is that's causing more harm than good because that contaminates the other recyclables, so our mantra really is when in doubt, throw it out,” Keegan says.

“When you look at the bottom of the bottle it looks like chasing arrows, the symbol that we've all come to recognize as the recycling symbol, it's actually not, it's just a resign identification code. It tells you what type of plastic that container or bottle was made from."

It’s true. There are seven kinds of plastic. However, only 1, 2 and 5 are accepted in your curbside bin.

We're talking pop and water bottles, detergent jugs and yogurt and margarine tubs. You can check with your hauler about the other numbers. And as much as you want to recycle number 4 plastic, your bread bags and the bags you get at the grocery store, PLEASE don't put them in your bin. They clog up the machinery and cause problems at the material recovery facilities.

"Really the thing to do is bring them back to your store, your retailer, your grocery store or where ever you're doing your shopping that's supplying the bags, they will usually have a return location,” says Keegan.

Know what else gets stuck in the equipment? Things like Christmas lights and extension cords.

"It's really hard to capture those little shreds, they're just too small. Anything smaller than your fist shouldn't go in a recycling bin."

Another boom moment for me. Anything smaller than your fist shouldn't go in a recycling bin, which brings us to this next part. Quit can crushing. It makes it hard for the machines to capture them. Keegan says leave all containers in the dimension you bought them.

You’ve probably been told not to recycle caps. I mean they’re smaller than a fist, right? True, but there’s a caveat.

“We want all caps on all bottles. They will get recycled with the bottle. If you take them off the bottle they're too small for our system,” Keegan says.

Then there's the stuff that actually poses a danger to our recycling friends. Dirty Diapers, Needles or medical waste and batteries. We saw them all. And while each one comes with its own hazards, batteries are by far the biggest concern in the industry. All batteries are bad. Lithium batteries are deadly. When they get punctured or damaged (which is highly likely with all this machinery and equipment) they catch fire.

Fire in a room full of what is essentially fuel... is a major problem.

He admits the industry has had a problem with consistent messaging but feels with a little education, we can have a recycling system that truly has an impact on our environment.

"We're doing better than other states but there's still a lot going in the bin that shouldn't be going into the bin."

Part 2 on Wednesday at 10 p.m.: How much of what's in the bin actually get recycled?

RELATED: Simple swaps for reducing your plastic use

1 / 6
KARE
Leave the caps on the bottles