Luke Zajac had to be rescued by Chisago County first responders last Sunday. 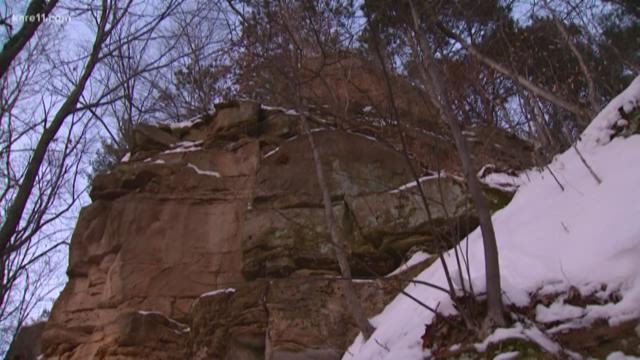 MARINE ON SAINT CROIX, Minn. — One week after the Chisago county first responders performed a dramatic rescue out of Interstate State Park in Taylors Falls, Luke Zajac said he's lucky to be getting away with just sore legs and feet.

To Zajac, the term 'action' takes on a whole new meaning. He's been a snowboarder for the last ten years and a skateboarder for even longer. He said he loves making videos of stunts and tricks and posting them on social media.

That was exactly what he was doing last Sunday at Interstate State Park. He said he had scoped out the location for a cliff jump stunt. He and his brother Zach, even went to the park the Sunday before the last to find the perfect cliff.

The stunt didn't turn out the way they wanted it to. It ended with Zach calling 911 because Luke had fallen 30 feet, and was unconscious in the snow.

"It was pretty hard to see, [we were] still trying to get the clip so I just went for it," Luke said. "Overshot my landing and the impact pretty much made my knees hit my face and [I] went into like a two to three minute seizure."

RELATED: Man injured in fall off cliff at Interstate Park

Zajac said he's never fallen like that before, not even after all his experience both in the snow and on the pavement. He said he doesn't remember anything after the fall other than what his brother recounted to him.

"They showed up and were trying to assist me but I was kind of fighting and resisting so then they restrained me and gave me something to relax me," he said. "Then I got put on a helicopter and then woke up in the hospital pretty much."

Zajac said he's not giving up on snowboarding or skateboarding. However, he's going to remember the Golden Rule of safety next time.

"Usually I'd have worn my helmet and I wasn't wearing my helmet that day," he said. "I'd advise anyone to wear their helmet if they're hitting any street-type obstacles for sure."

Zajac has a Gofundme going to help pay for his medical bills. You can find the link to that here.