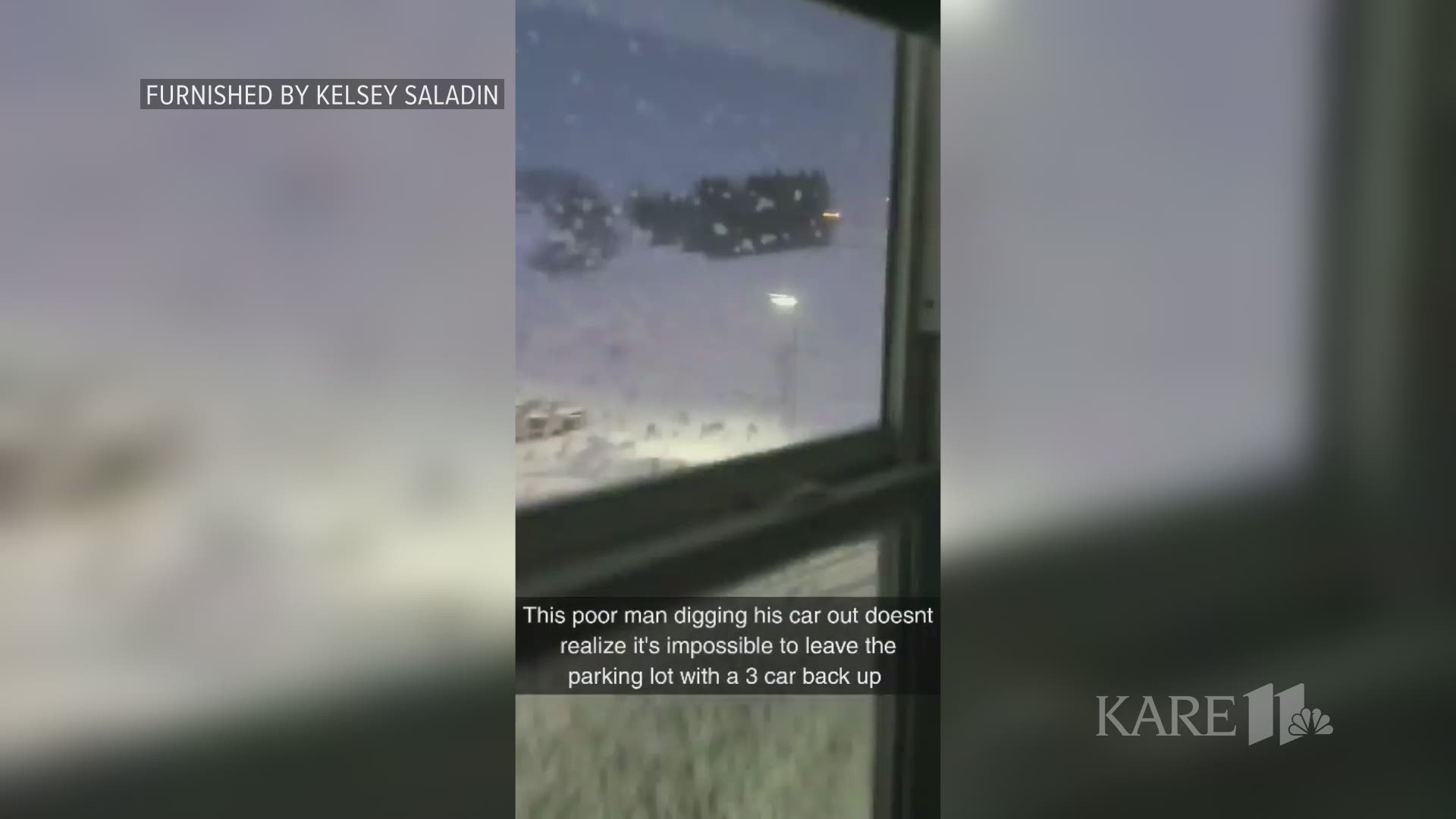 ROCHESTER, Minn. — A Rochester grad student's snowy parking lot observations have turned her and her roommates into viral sensations.

As of Monday night, around 10 million people have viewed Kelsey Saladin's Facebook video of car after car getting stuck in her apartment complex's parking lot during Sunday's blizzard conditions in Rochester.

"I had woken up at around 6:30 in the morning, and I had just looked out the window to see how much snow we had gotten the previous night," Saladin said. "I just noticed probably 5 to 10 cars parked randomly across the parking lot, not in correct spots, kind of plowed into different snowbanks. I started to notice certain people were trying to dig their cars out or trying to drive out so I just started recording it."

Several of her neighbors attempted to drive through the heavy snow, and each one got stuck.

"Either they saw what was going on and just decided they were going to be the ones to get out, or we don't know what they were thinking, but it was funny to see more and more people coming out of the garages and trying to get out anyway, even though it was clearly not happening," Saladin said.

Saladin and her roommates continued watching and recording throughout the day Sunday.

"I had no plans to go anywhere that day anyway. I was just going to stay home and study for midterms with my roommates, but we got a little distracted," she said.

Saladin said parts of their parking lot still hadn't been cleared by Monday afternoon, but she was still able to get to classes.

"I take the public transportation with the bussing system here," Saladin said, adding that her car is safe when she needs it. "I'm lucky, I actually parked in the garage, so I don't have to worry about this, but my two roommates, their cars are pretty buried right now."

Saladin says she and her roommates have been bombarded with friend requests and messages as the number of views of their video continues to rise.

"I originally had just been uploading them to my Snapchat account. People suggested I just put it on Facebook so other people could see what was going on, and so I just uploaded it, to show some friends and family, and it blew up. It's crazy honestly, I never thought it would get this big."

"People keep telling me I should quit school and become a content creator, but I have not desire to do that, I do not want to do that," Saladin said. "My mom told me to stay in school, she told me this isn't going to carry me that far. So, I plan on staying in school."