Somali teens say they feared for their lives at Minnehaha Park

Somali teenagers said Monday they feared for their lives when Park Police pointed a weapon at them and detained them at Minnehaha Regional Park last week. 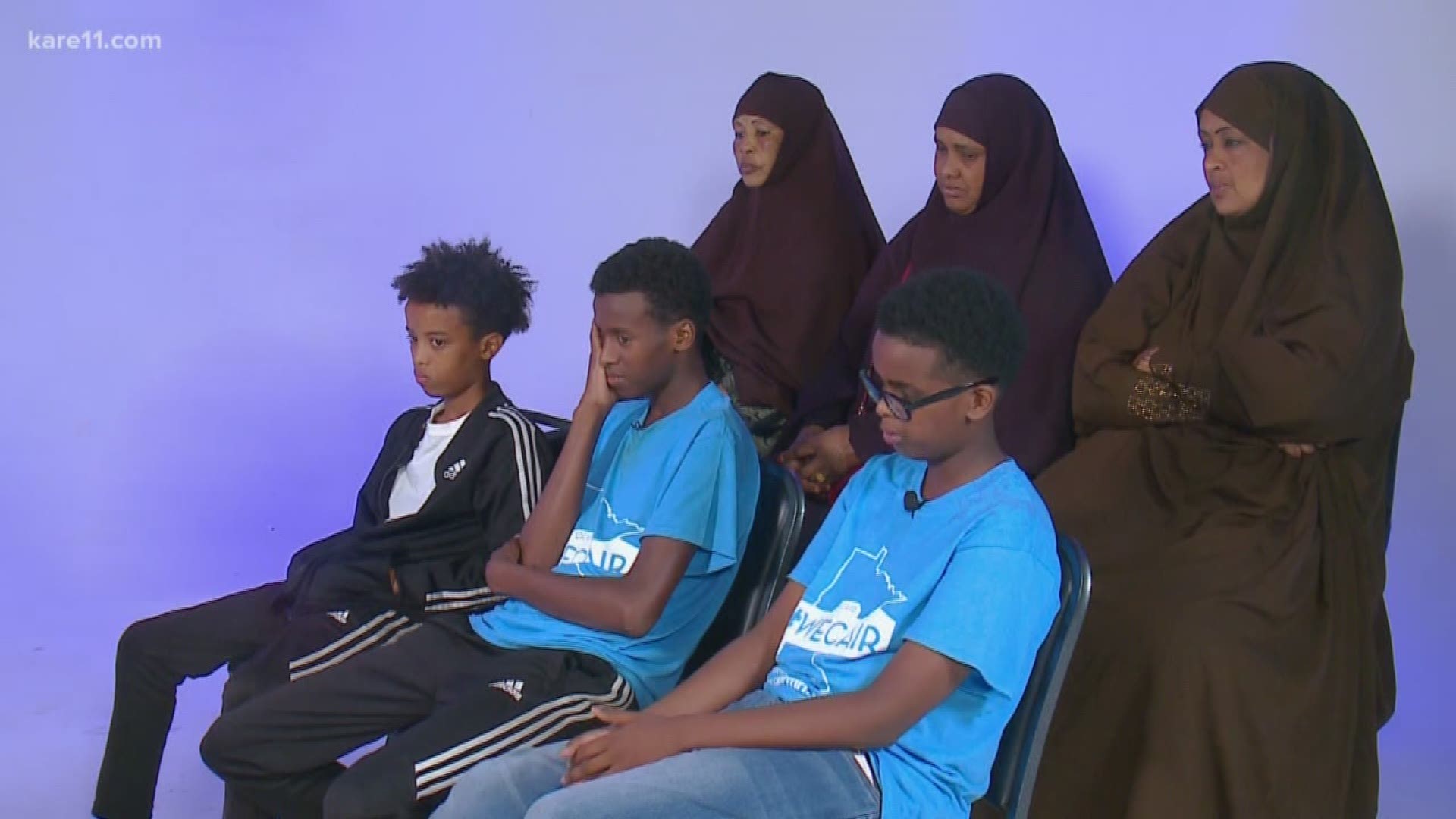 Abdijabar Ahmed said he was so scared he thought it would be his "last day of this world."

The three middle school students, all sons of Somali immigrants, explained for the first time on Monday how an encounter with Minneapolis Park Police last week left them shaken and afraid for their lives.

In a news conference organized by the Minnesota chapter of the Council on American-Islamic Relations (CAIR), the teens stood side-by-side with their mothers and recounted how a Park Police officer pointed a weapon at them and placed them in handcuffs for several minutes before releasing them without charges.

A video of the incident has now been viewed nearly three million times on Facebook, garnering national media attention and prompting the Park Police to seek an independent investigation into their officers' conduct.

"I felt like I was discriminated. I felt like it was not supposed to happen," Guffe said, "and I hope it never happens to anyone again."

A fourth Somali teen was also placed in handcuffs, but he did not attend the news conference due to a family emergency.

Park Police said officers acted in response to a 911 call, which described four teenagers with knives and sticks. The caller said one of the teens said he had a gun in his backpack, and the caller also said the teens were carrying out an assault.

Park Police said one officer "unholstered" his gun and pointed it in the general direction of the teens upon arriving, prior to handcuffing the children and detaining them in the squad car.

No weapons were ever found on any of the teenagers, police said. The agency is investigating whether the 911 caller knowingly provided false information, which would be a crime.

Last week, the witness who posted a video of the incident on Facebook claimed that the four teenagers were being taunted by a white teenager before police arrived.

The teenagers, who are between the ages of 13 and 16, corroborated that eyewitness account. They said the white teenager called them racial slurs and threatened them with a knife and a garbage lid.

"I just thought when police came, I basically thought they were going to go to that suspect because he had the knife," Guffe said, adding that police instead ordered them to the ground. "We were cooperative but they still... They mistreated us, still. And they wouldn't listen to us."

A spokesperson for the Minneapolis Park Board said it appears Park Police still have not located the person who called 911 (and/or the person who allegedly threatened the teens on the scene).

"The Minneapolis Park and Recreation Board (MPRB) continues to work on the July 10, 2018 case involving the 911 call that led to the handcuffing and detainment of four youth at Minnehaha Regional Park," the spokesperson said in a statement to KARE 11. "The investigation into the origins and validity of the initial 911 call is ongoing."

According to a police report, attempts to reach this caller in person and by phone initially failed. "Other suspect involved not identified," the report said.

The Park Board spokesperson said the agency held a meeting with families last week to listen to their concerns and apologize for what happened. Outside legal counsel has now been hired to independently investigate the officers' conduct at the park, the spokesperson confirmed.

Adam's mother, Sirat Guffe, said through a translator that the officers' behavior toward her son was unacceptable.

"The way our children were dealt with was really subhuman," she said. "It was horrible, they treated our children as felons and as thugs and our children are just like any other children, were outside during the school break enjoying the park system."

Jaylani Hussein, the executive director of CAIR, said the families are considering a lawsuit. However, no legal action has been taken at this point.

The teenagers, according to Hussein, have said the Park Police officer who pointed his weapon at them was "trembling," which they interpreted as an extremely dangerous situation that "could have become, unfortunately, extremely tragic."

The children were released without any physical injuries, according to Park Police, but Hussein said some of the teens still had markings on their wrists from the tight handcuffs.

He places the blame on both the 911 call and the on-scene conduct of Park Police.

"It started out as a hate crime," Hussein said, "and police doubled down with a very horrible, scary situation."