Adoptees from South Korea are using the Olympic spotlight to lobby for a change in law. 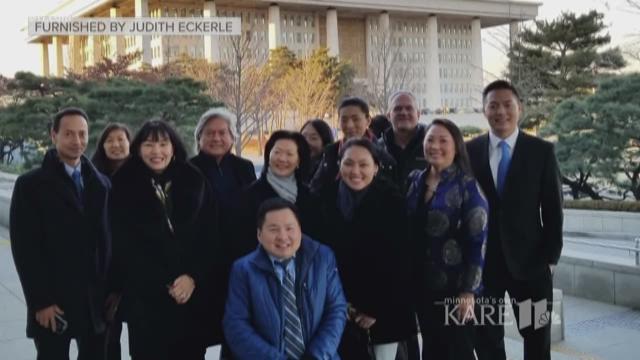 They want to see a change in adoption laws, to ensure children can have the opportunity to be a part of a family.

"I have three siblings; older brother, older sister, younger brother, who are biological to my parents," said Dr. Judy Eckerle, a University of Minnesota Associate Professor in the Division of Global Pediatrics and Director for Utilization Review.

Abandoned at a fire station in Seoul, South Korea, Dr. Eckerle says she is thankful that her adoptive family in Minnesota found her at 6 months of age.

Dr. Eckerle is part of a delegation made up of 18 South Korean adoptees in the United States. Last week as the world prepared for the Winter Olympics in Peyongchang, they traveled to South Korea to attend the opening ceremony and to speak with the South Korean National Assembly.

They want lawmakers to make changes to an adoption law that was passed in 2014. Eckerle says it restricts adoption of South Korean children who are abandoned, because it requires birth parents to sign a national registry.

"As a birth parent, if you are already dealing with the shame and stigma of having to give up your birth child, sometimes they don't want that as part of their permanent record," said Dr. Eckerle.

So then some parents, she says, leave children at orphanages where they will likely stay until they "age out" at 18 years old.

"In Korea, they are given the equivalent of $5,000 and good luck," she said. "Most don’t have a college education. If you are in Korea it’s a stigma to be an orphan and not have a family registry, which lowers their chance to get married or to have a prominent career."

Dr. Eckerle says the lawmakers they met with would like the delegation to come back to speak with more lawmakers and to educate them on best adoption practices.