A South St. Paul girl is doing her part to help children who are bullied. 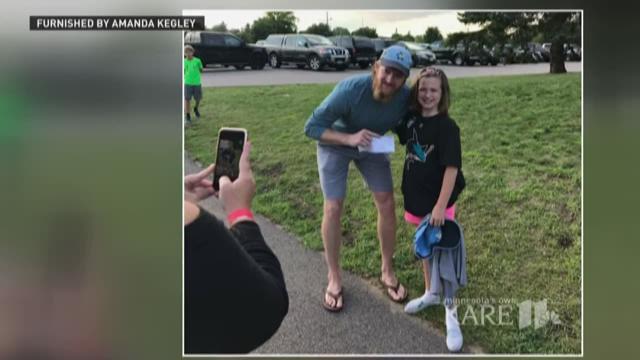 SOUTH ST. PAUL, Minn. -- A South St. Paul girl is doing her part to help children who are bullied.

Maddie Kegley, 10, is an avid hockey fan. This summer, she attended the Da Beauty League in Edina and found out about the Shine A Ligh7 Foundation. The non-profit's founder is Minnesota native and former Gopher, Paul Martin. Martin currently plays for the San Jose Sharks. Shine A Ligh7 is focused on anti-bullying efforts, suicide prevention and mental health awareness in children.

"The anti-bullying thing really stood out to her," said Amanda Kegley, Maddie's mom.

The foundation had an upcoming charity concert but the event was 18+. Maddie wanted to do her part to help so she started "Books Against Bullying." With the help of her mom, she collected book donations and then set up a book sale in her driveway. She set a goal of $200 but by the end, she had raised more than $600 for Shine a Ligh7. She was able to present the check to Martin and he invited her to be a guest at the event in September.

"I don't like it when kids are bullied and all the kids need to get treated the same. No kids are better than each other," Maddie said.

Maddie's friend, Cooper Meyer, was inspired to get involved. He gave the foundation his allowance money and is now joining Maddie in her efforts to continue fundraising at their school, Lincoln Center Elementary.

Maddie and Cooper, both fifth graders, are part of the school's Student Ambassadors group. The organization, which includes 22 student ambassadors in grades 4-5, plans to help Books Against Bullying. They will soon start brainstorming ideas for the event.

"I'm super proud of them. It's great to see the kids taking the initiative and really leading what it is that we do as an organization within the school but also as a school community," said Julian Stanke, a behavior specialist at Lincoln Center Elementary. Stanke also is one of two advisers for the Student Ambassadors group.

Books Against Bullying's second fundraiser will happen this Saturday.

"75 percent of the proceeds will be going to Shine a Ligh7 and then 25 percent will go to the VanderVeer family who tragically lost a daughter recently," Amanda Kegley said.

Lillian VanderVeer of South St. Paul took her own life last month at the age of 12. Her mom said that Lillian was dealing with mental health issues.

Saturday's fundraiser will be in honor of Lilly.

"That's why we think we should help so other kids don't think they should do that same thing if their life is rough and that there is someone out there to help them," Meyer said.

When talking about her daughter, Amanda Kegley said, "She's great. She brings light to my life. I, myself, suffer from mental illness. So seeing her do this and her strength and her charm, her smarts, and things like that, it really just brings joy to me."

Books Against Bullying will be at the "On the Road Again" festival held in South St. Paul along Southview Boulevard on Saturday, Oct. 7 from 8 a.m. to 5 p.m. Books will be $1 each.

Those who can't make the fundraiser but would like to help, can send donations to:

Checks should be made out to "ShineALigh7."

Also, a GoFundMe page has been set up to help Lillian VanderVeer's family with expenses.