More than one week after her trial started and a day after she was found guilty of murder, Amber Guyger has been sentenced to 10 years. 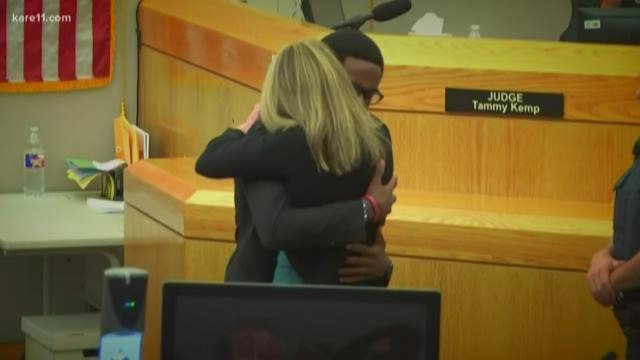 DALLAS — Emotions were high moments after the jury sentenced Amber Guyger to 10 years in prison for the murder of 26-year-old Botham Shem Jean the night of Sept. 6, 2018.

"That 10 years in prison is 10 years for her reflection and for her to change her life," said Allison Jean, Botham Jean's mother.

During closing arguments, the state asked the jury to sentence Guyger to a minimum of 28 years – the age Jean would be today if he was still alive. 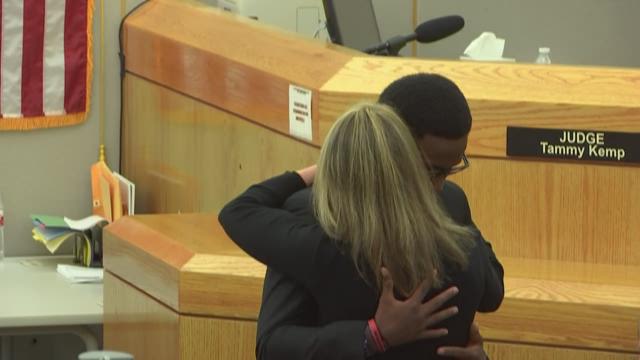 Jean's brother, Brandt Jean, was the first to speak.

"If you truly are sorry, I know I can speak for myself, I forgive you," he told Guyger from the stand. "I know if you go to God and ask him, he will forgive you."

He then asked the judge if he could hug Guyger.

Brandt Jean then left the stand and embraced Guyger, who broke into tears as Brandt whispered something into her ear.

Before impact statements began and just after the verdict was read, there was no audible reaction inside the courtroom. But just outside the doors, women wearing red chanted, "No justice, no peace."

"This ain't right," said one woman with tears streaming down her face.

Allison Jean later also demanded more justice, saying, "there is much more that needs to be done by the city of Dallas."

"The corruption that we saw during this process must stop," she said.

"Because after now, I leave Dallas," Allison Jean said. "But you live in Dallas. And it must stop for everyone."

Jurors were given the option to consider "sudden passion," which would mean a sentence range of two to 20 years.

During the reading of the sentence, Kemp said the jury found that "the defendant did not cause the death of Botham Jean while under the immediate influence of sudden passion."

Over a two-day period, character witnesses for Jean and Guyger took the stand.

Bertrum Jean was first to be called by the state Wednesday morning.

"I loved my Sunday morning," he told the courtroom Wednesday. "My Sundays have been destroyed."

Sundays, he told the courtroom, were the days he would talk with his son on the phone after Jean returned home from church.

"Sundays are not a good day for me," he said, breaking down in tears several times while on the stand. "Because I'm not hearing his voice."

"I cannot sleep," she told the courtroom. "I cannot eat. It's just been the most terrible time for me."

Karen Guyger, Amber's mother, was the first witness called by the defense Wednesday.

She also became emotional on the stand as she described a young Amber Guyger, who she called sweet and someone who easily made friends.

Karen Guyger testified that a former live-in boyfriend of hers molested Amber when she was 6 years old. He was later arrested on a charge of indecency with a child, she said.

"She was very upset," Karen Guyger said of when her daughter first told her about the shooting. "I couldn't understand her because she was crying so hard."

"She wanted to take his place," Guyger's mother said. "She always would tell me she wished she could have taken his place."

Tuesday, the day Guyger was found guilty, the former Dallas police officer was booked into the Dallas County jail. She was taken into custody outside of the jury's presence at the end of the day. 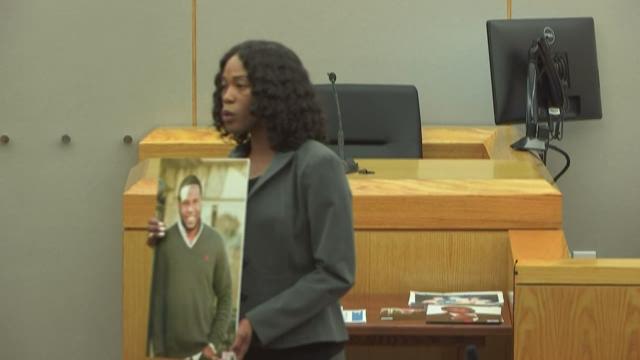 Former Balch Springs officer Roy Oliver was convicted in 2018 of murder in the on-duty shooting of 15-year-old Jordan Edwards. He claimed defense of a third party because he believed the car Jordan was in was going to hit his partner. Oliver was sentenced to 15 years in prison.

Former Farmers Branch officer Ken Johnson was convicted in 2017 of murder in the off-duty shooting of 16-year-old Jose Cruz. He was also convicted of aggravated assault with a deadly weapon for injuring 16-year-old Edgar Rodriguez. Johnson was inside his home when he saw the teenagers stealing the seats from the back of his SUV. He chased their car and fired several times into the car, killing Cruz. He was sentenced to 10 years in prison.

Dallas police officer Darrell Cain was sentenced to five years in prison for the 1973 murder of 12-year-old Santos Rodriguez. Cain played Russian roulette with the boy and shot Santos in the head.

RELATED: Murder vs. manslaughter: What were charges considered by jury in Amber Guyger trial