A St. Bernard in Sherburne County is in safe hands now after an improbable survival story. 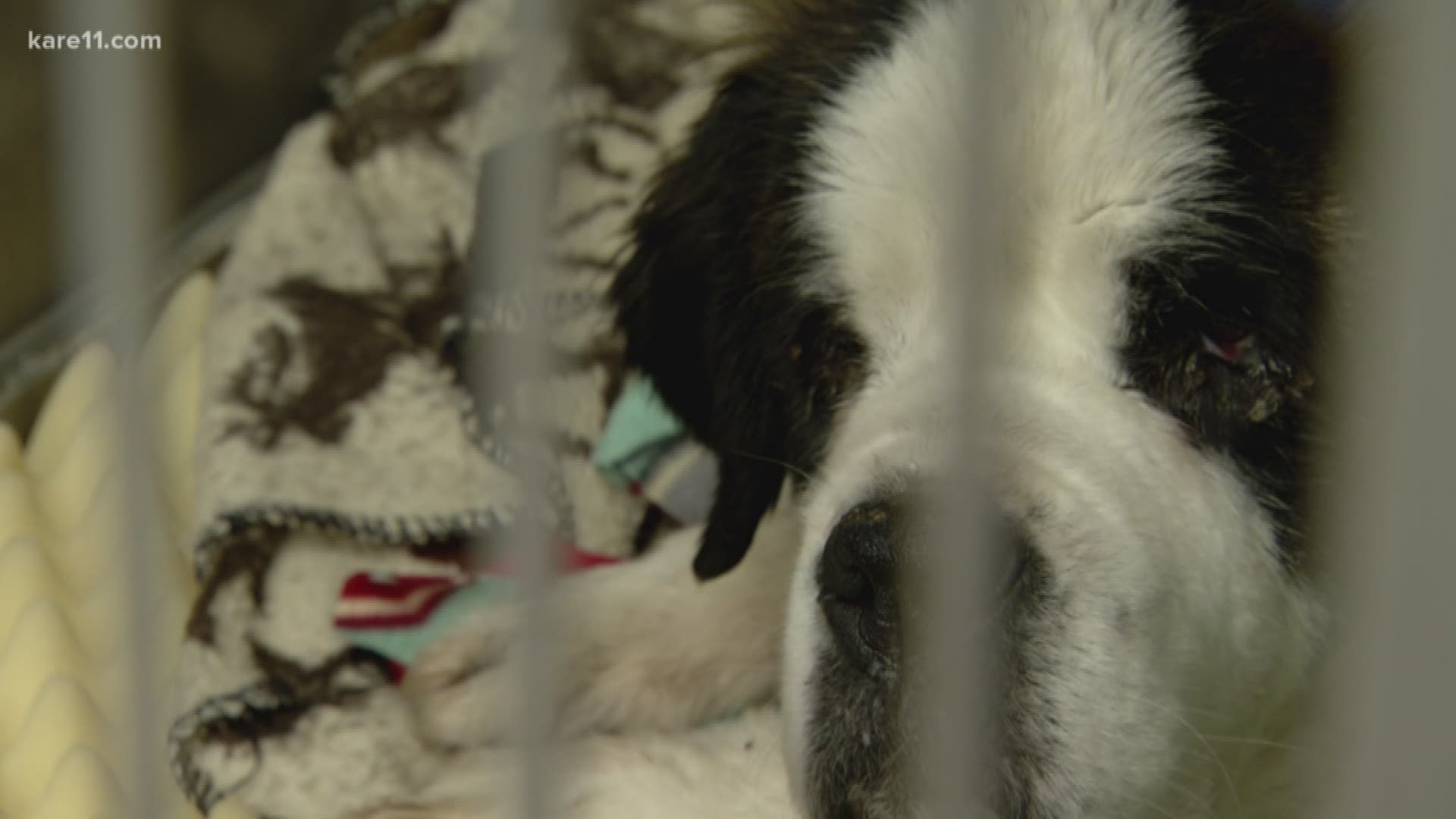 ZIMMERMAN - Old Lady had been gone for 17 days and time was running out.

The 10-year-old St. Bernard, fresh off a rescue from a puppy mill in Wisconsin, had now run away from a foster home in Zimmerman after getting spooked by the snow. That was on Jan. 4.

Seventeen days went by, and local rescuers weren't sure she could survive the cold much longer.

"We couldn't even sleep at night," said Azure Davis, the executive director and founder of the non-profit Ruff Start Rescue based in Princeton. "It's so cold. One night, I woke up, it was negative 10 this past weekend. All I could think about is, 'I hope she's alive.'"

Sherburne County Sheriff's Deputy Renee Casey, a 12-year veteran of the department, took a call at the end of her shift about a boxer in distress on a wooded property in Zimmerman. A grandfather and his grandkids had noticed the dog tangled up in the trees, so they called 911 to get the dog some help.

They described the dog as a boxer.

"Upon coming up to the dog, I immediately knew this was not any boxer," Casey said. "It was Old Lady."

She knew, without a doubt in her mind, who this dog was because Casey is a rescue volunteer herself.

She's known among co-workers as the "crazy dog lady."

"The stars were in alignment," Casey said, "where I ended up going to this call. I recognized her."

That awareness allowed her to quickly reach Ruff Start Rescue, where a friend of her worked as a volunteer.

Davis and one of her Ruff Start Rescue teammates then promptly responded to the home in Zimmerman and untangled Old Lady's leash from the woods. It turns out the dog had a stick on her leash, which is how she got caught up in the trees initially.

Davis says that probably saved her life, because it confined her to one place where the homeowner was able to spot her finally on Monday afternoon.

Another key to this success story was Deputy Casey.

It may have taken a long time to connect Old Lady to Ruff Start if Deputy Casey weren't so familiar with the missing dog case.

The whole time, a woman named Carolyn Kne had been agonizing over the fate of Old Lady. As a volunteer with The Retrievers, a lost dog group, Kne had been searching far and wide for the dog over the past few weeks.

"I saw the social media post that they found her," Kne said, "and I literally started crying."

So she decided to adopt Old Lady.

The dog has lost considerable weight and suffered extreme trauma in the cold — plus, a decade in a puppy mill has made her quite fearful of humans — but her vital signs are strong.

Considering what she's been through, Old Lady is doing pretty well.

"She will come home with me when she's able to," Kne said, "and live a full, happy life."

Kne even has an idea for a new name: "Tesha."

It is the Hindi word for "survivor."